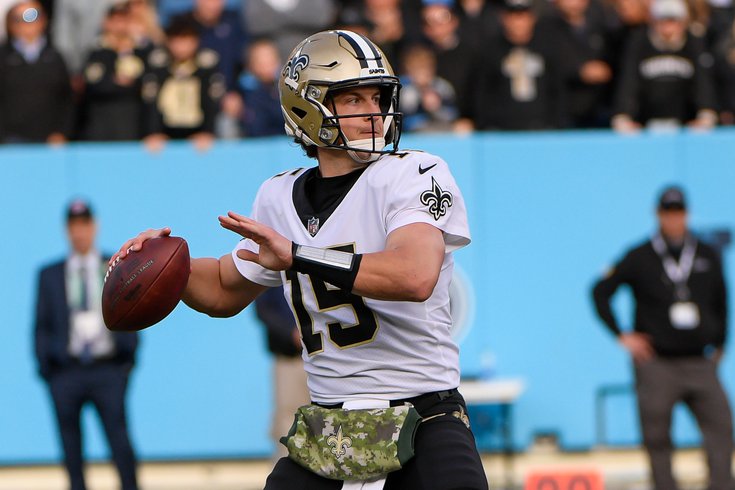 This person is Trevor Siemian. He is not as accomplished an NFL quarterback as Drew Brees was.

After an impressive road win against the Denver Broncos Week 10, the Philadelphia Eagles sit at 4-6, and would be well positioned for a run at a wildcard berth with a win over the New Orleans Saints Week 11. Here are our five matchups to watch.

1) The Eagles' red hot rushing attack vs. the Saints' No. 1 run defense

Over the last three games, the Eagles have run for 632 yards and 6 TDs on 5.1 yards per carry, and they've done it without starting running back Miles Sanders. It should be noted that in two of those games, they faced woeful run defenses in the Lions and Chargers, however, the Eagles also dominated a Broncos' front that was formerly the seventh-best run defense in the NFL, at least statistically.

The Saints have the best run defense in the NFL.

There's also a big gap in between the Saints' 3.1 yards per carry allowed and the next best team (Buccaneers, 3.7). They have excellent run defenders at all three levels of the defense, highlighted by Cameron Jordan and Shy Tuttle on the defensive line, Demario Davis at linebacker, and old friend Malcolm Jenkins on the back end.

Strip out that one bad performance against the Eagles last season, and the Saints would have finished second in rushing yards allowed per game (83.7) and first in yards per rushing attempt (3.5).

Sanders is eligible to come off of injured reserve this week, and Nick Sirianni will have to decide if he will return as the RB1, or just a role player. If Sanders is the RB1 once again, he will be under pressure to perform the way that Jordan Howard and Boston Scott have the last three weeks.

Eagles offensive coordinator Shane Steichen was asked what Jalen Hurts did so well in the run game against the Saints last year.

Anyway, this is the clear and obvious strength on strength matchup in this game, and it'll be interesting to see if the Eagles seek to impose their will against a tough opponent, or if they let the Saints defense dictate what the Eagles attempt to do offensively.

Smith is emerging as a star NFL receiver in his rookie season. In his last two games, he has 9 catches for 182 yards and 3 TDs. All of the Eagles' other receivers combined have chipped in 8 catches for 48 yards, and 0 TDs. As such, it would make sense for the Saints to make sure that Smith is being covered often by their best corner, Marshon Lattimore.

The Eagles should not shy away from throwing at Lattimore. In his first two seasons, Lattimore was a legitimate playmaker. He had 5 INTs (including a pick-6) and a forced fumble as a rookie. In his second season, he had 2 INTs, 4 forced fumbles, and 3 recoveries.

However, since 2019, Lattimore hasn't created many turnovers. He only has 4 INTs during that span, and no forced fumbles. He has gotten his hands on a lot of footballs, though, and he has racked up 35 pass breakups. Against Washington this season, Lattimore broke up 6 passes, which was "tied for the most by any NFL player in the past 15 years, according to ESPN Stats and Information," according to Mike Triplett of ESPN.

Lattimore chipped a bone in his thumb Week 1, had surgery, and wore a cast on his right hand up until last Sunday's loss to the Titans. He is no longer hampered by that cast. Still, the Eagles need to find a way to feed Smith, who is their best receiver by a wide margin. Even with his impressive numbers last two weeks, Smith has only gotten 12 targets. He should be getting closer to 12 targets per game.

You all know who Kamara is. He probably got picked top 5 in your fantasy football draft this year, and for good reason. He's a dynamic back who can hurt you on the ground or through the air, and he causes all kinds of matchup problems for opposing defenses.

Kamara injured his knee against the Falcons Week 9, but he finished that game. It was later reported that Kamara had a mild MCL sprain, and that he would miss one or two games. If he can't go, well, that's a big win for the Eagles. #Analysis. If he can play, the Eagles will have to figure out a way to control him in the passing game.

The Eagles have allowed 68 receptions to opposing running backs this season, which is the third-highest total in the NFL. However, those receptions haven't often turned into big plays, as they've only resulted in 6.8 yards per reception and 1 TD.

Kamara will be the best receiving running back the Eagles will have faced this season (again, if he's a go), and it will be interesting to see how Gannon plays him. T.J. Edwards lacks athleticism, and Davion Taylor remains a work in progress instinctually. The guess here is that the Eagles will show a number of different looks to try to slow Kamara down, but he should clearly be the focus of the Eagles' defense this week.

4) The Eagles' back seven vs. Trevor Siemian and the Saints' skill position players

With starting quarterback Jameis Winston done for the season with a torn ACL, the Saints' new starter is Trevor Siemian. So far, Siemian hasn't made big mistakes (0 INTs), but he also hasn't exactly inspired confidence that the Saints will remain contenders under him. He's completing 57.7 percent of his passes at just 6.8 yards per attempt.

Take Kamara out of the mix, and the Saints' offense isn't all that scary, particularly in the passing game. Their leading receivers:

Of course, Michael Thomas is out for the season after suffering a setback in his recovery from offseason ankle surgery. Guys like Cooper Kupp (Rams) and Deebo Samuel (49ers) have more receiving yards than the Saints' top three receivers, combined.

The most dangerous of the group is Harris, a 5'6 water bug who can make plays down the field.

The Saints should use Deonte Harris on some of Alvin Kamara’s routes. And get him much more than 30% of the snaps.

Harris was "sentenced to one year of supervised probation without a conviction after pleading not guilty Monday to a charge of driving under the influence stemming from a July traffic stop near his hometown of Baltimore," via Amie Just of The Times-Picayune. So that's perhaps worth monitoring, from the standpoint of a possible upcoming suspension.

5) Where should the Eagles be feastin'?

As we do each week, we'll point out the holes in the Eagles' opponent's offensive line. To begin the season, the Saints had one of the strongest offensive lines in the NFL:

The OT combo of Armstead and Ramcyzk is elite, however, Armstead hasn't been healthy this season. He missed two games earlier this year with an elbow injury, and he was out against the Titans Week 10 with shoulder and knee injuries.

On the interior, Caser Ruiz has been a disappointment so far after the Saints selected him in the first round of the 2020 draft, and Erik McCoy is having a down year.

Siemian has held onto the ball an average for 2.86 seconds from snap to throw, while Winston held it on average for 3.02 seconds. This is not the "get it out quick" offense you're used to seeing under Drew Brees, and the Eagles should have pass rush opportunities.