Week 11 NFL odds: Point spread and total for every game, including Eagles vs. Saints 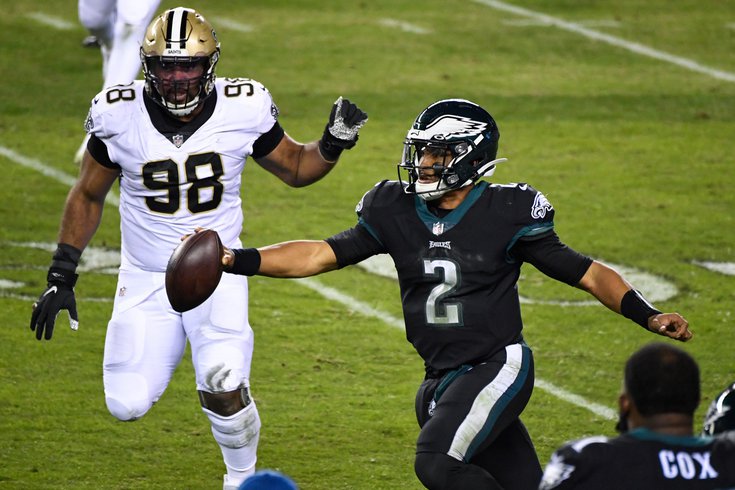 Jalen Hurts and the Eagles open up as 1.5-point home favorites against the Saints on Sunday.

It's hard to believe that we're already through 10 Sundays of this football season, but that's the reality as we head into Week 11 of the first 18-week NFL campaign, one that will feature an extra playoff team in each conference as well.

But despite nearly two and a half months worth of games under our belts, there's still a lot to be sorted out when it comes to the haves and have-nots around the NFL. There are currently 18 teams overall with between three and five wins, leaving the middle very muddled indeed, especially with a third wild card spot up for grabs. And even at the top it's tight, as there are currently no teams with fewer than two losses and four of the five teams with two losses play in the NFC.

On the other side, 14 of the 16 AFC teams have between two and six wins (just the 8-2 Titans and the 1-8 Texans are the outliers). And 11 of those teams have either five or six wins, meaning things could get very interesting come playoff time.

So where does that leave us when it comes to the lines for this slate of Week 11 games? With some intriguing ones, to say the least. As we do every week, let's take a look at the early odds for each matchup this coming weekend, including Eagles vs. Saints...

The Patriots are red hot, fresh of their 45-7 victory over the Browns on Sunday that extended their winning streak to four games and currently sitting just a half game back of the AFC East lead. The Falcons, on the other hand, are coming off a blowout loss to the Cowboys that bumped them out of playoff position, and they'll be giving up nearly a touchdown at home to Bill Belichick's team.

For just the second time this season, the Eagles find themselves as favorites heading into a game. That's likely due to the fact that not only will the Saints be without Jameis Winston, who was lost for the season a few weeks back, but they could be without top running back Alvin Kamara. That, combined with an improved Philly team that's playing its best ball of the season, and the Birds could be in line for their first home win of the season. It's either that, or another letdown at the Linc.

Carson Wentz has the Colts playing well, as they've won four of their last five, but they'll head into Buffalo to face a 6-3 Bills team that has at times been inconsistent but is still the clear favorite in this one. Josh Allen and Co. bounced back nicely from a shocking loss to the Jags with a blowout win over the Jets on Sunday. They'll look to keep that up when they return home against Indy.

Two of the bigger surprises on Sunday came when Washington knocked off the defending champion Bucs and when the struggling Panthers, with the help of old friend Cam Newtown, absolutely demolished the previously 8-1 Cardinals, who admittedly were playing without Kyler Murray and DeAndre Hopkins but still entered the game as a touchdown favorite. Now, they'll face each other in Week 11, likely with Cam starting under center for Carolina.

Both of these teams will be coming off added rest, as Baltimore is still licking its wounds following a bad loss to the Dolphins on Thursday Night Football. The Bears, meanwhile, are coming off a bye week and will look to bounce back after a tough loss to the Steelers in Week 9. If nothing else, it should be an intriguing matchup of two dynamic QBs in former MVP Lamar Jackson and rookie Justin Fields.

Just what the Browns needed after being blown out by the Pats on Sunday: a date with the still winless Lions, who managed to avoid yet another loss thanks to a laugher of a tie against Pittsburgh. Doesn't 0-8-1 just sound better than 0-9? However, with a matchup against Cleveland on the horizon, Lions fans shouldn't have to wait long for that ninth loss.

The Jaguars are coming off a loss to the Colts and will be getting a bit of a break in this one, facing the cross-country 49ers on a short week (following Monday night's game against the Rams). The question is, can they take advantage of it?

Aaron Rodgers returned for the Packers on Sunday, but it was his team's defense that stole the show, holding Russell Wilson and the Seahawks scoreless en route to a 17-0 victory. Now 8-2 and tied for the best record in football, Green Bay will travel to Minnesota to face a division rival in Kirk Cousins and the 4-5 Vikings, who are coming off a win of their own over the Chargers on Sunday.

This is a meeting not only between the two worst teams in the AFC East, but also two of the worst teams in the NFL — and yes, we know the Dolphins just beat the Ravens last week. The long rest for Miami should help them against a Jets team who will likely be going back to Zach Wilson after Mike White turned into a pumpkin against the Bills.

The Texans are one of the worst teams in football. The Titans, even without Derrick Henry, have proven to be one of the best. Let's not overthink this one.

The first game in the late window features a matchup between two 5-4 teams in the Bengals and Raiders who are each riding two-game losing streaks heading into this one. But Cincy will be coming off the bye while the Raiders just faced Patrick Mahomes and the Chiefs on Sunday Night Football.

Speaking of the Chiefs, they face a tough matchup this week as they host the 7-2 Dallas Cowboys. Both of these teams picked up wins on Sunday, the Cowboys needing one after a bad loss to the Broncos a week earlier and the Chiefs picking up their third straight as they finally started to look more like themselves against Vegas.

The Seahawks got their quarterback back in Week 10. Will it be the Cardinals turn to get their QB back in Week 11? They certainly hope they do — and that he plays better than Russell Wilson did in his return.

The Steelers weren't able to beat the Lions, but they didn't lose to them either. This week, they have a trip out to L.A. to face the Chargers in primetime. The real question here remains whether or not Ben Roethlisberger is back after missing that Lions matchup due to COVID-19. The Chargers, on the other hand, will be looking to bounce back after a disappointing loss to the Vikings at home.

After a loss to Washington on Sunday, expect Tom Brady and the Bucs to take out all their anger on the Giants.