Eagles vs. Saints: Predictions, betting odds and more for Week 11 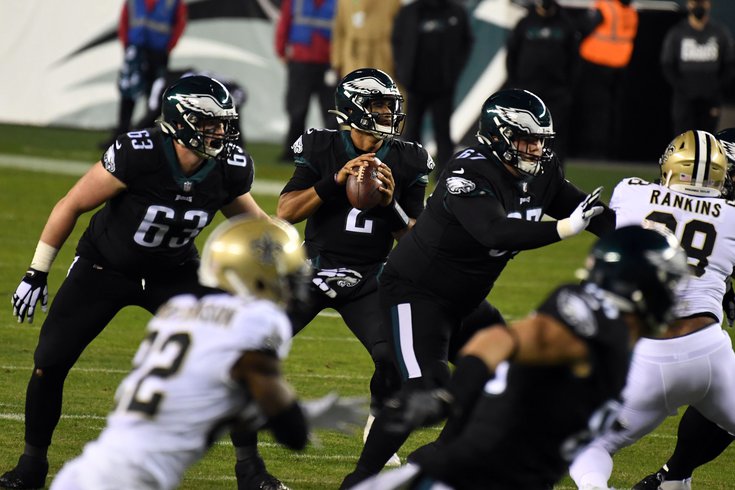 The Philadelphia Eagles have gotten used to playing the role of underdog this season, but that could change going forward, starting with Sunday's game against the Saints in which they find themselves as home favorites for just the second time all season.

Part of that has been due to their inconsistent play, while an equal share also has to do with their opponents, as the first half of their schedule was much tougher than the second. That, coupled with an improved offensive game plan from Nick Sirianni should have the Eagles favored in all but one or two of their remaining matchups, with their game against the Cowboys being one of the obvious outliers.

Following this Saints matchup, they'll have six games remaining: two against the Giants, two against Washington, Dallas at home and a trip up to the Meadowlands to face the lowly Jets (not in that order). And there's a chance that the toughest game on the schedule, that Week 18 matchup with the Cowboys, could wind up being quite winnable if Dallas' playoff seed is already locked up and they decide to rest their starters.

It's why some people — but not all — are beginning to talk playoffs when it comes to this Eagles team, something very few considered a possibility when the season began. And a win on Sunday against the Saints — one of the teams they're chasing for the newly-added third wild card spot — could go a long way toward making that happen.

Against the top run defense in the league, will Sirianni stick with what's been working for his team in recent weeks, especially with Miles Sanders possibly returning to the lineup? Or will they turn back into a pass-first team in front of the home crowd, something will surely draw boos from the Philly faithful? We'll find out on Sunday. In the meantime, here's a look at how our writers see this Eagles vs. Saints matchup playing out...

This is a matchup of strength on strength, as the Eagles' red hot rushing attack will face the No. 1 rush defense in the NFL.

In taking a look at the Saints' schedule over the last two seasons, the only other teams that they have faced that employed quarterbacks considered to be running threats were the Patrick Mahomes-led Chiefs (Week 15, 2020) and the Daniel Jones-led Giants (Week 4, 2021). They lost both of those games, like they did against the Hurts-led Eagles. In those three games against Mahomes, Jones, and Hurts, the Saints allowed an average of 169.3 rushing yards per game on 5.2 yards per carry. Will the Eagles rack up over 200 yards on the ground against this Saints defense again? No, probably not, but I do think they can run the ball effectively.

On the other side of the ball, this is not the explosive Saints offense you remember. They're led by JAG backup Trevor Siemian, whose top three wide receivers are Deonte Harris, Marquez Callaway, and Tre'Quan Smith.

The Eagles have the better team in this matchup, and should pick up their first home win of the season.

The season sort of rides on this game. Yes, it’s only Week 11 and there will be 6 more games after this one, but having a tiebreaker in hand against the Saints — one of the teams Philly is chasing for Wild Card positioning is going to be key.

With cake walk games ahead against the Jets, Giants and Washington, getting to nine wins could be the difference between getting Jalen Hurts playoff experience and having him continue as QB1, or a repeat of last year, tanking in Week 18 to get a slightly better draft pick.

The Eagles have momentum and confidence, and despite New Orleans having a very good defense, Trevor Siemian doesn’t scare me much. I think the Eagles are rightfully favored here and will pull out their first home win.

I have been absolutely horrible picking Eagles games the last few weeks, so if you're coming to me for advice, I apologize in advance. You must be really desperate. But if you're still interested in my take on the game, here goes...

I said it on this week's edition of Post Flight, but the Saints have been one of those teams that have been really hard to gauge this season. First, there was a hot start by Jameis Winston, and when he went down I thought that was it for this team, but they managed to pull off that surprise win over the Patriots (in a shootout, no less). And then the last two weeks, despite losing both, they were in it right up until the end, with those two losses coming by a combined four points.

But it's really been the defense that has been the story for the Saints this season, and the thing that's kept them competitive despite Drew Brees' retirement and Winston's season-ending injury. They've allowed just one team to run for over 100 yards against them (Washington back in Week 5) and are allowing 72.9 rushing yards per game and 3.1 yards per attempt, both the best in the NFL. The Eagles, meanwhile, have been the best rushing team in the NFL over the last month-plus, ever since Nick Sirianni decided to change his approach. The one wild card here is Jalen Hurts, given that the Saints haven't had a lot of success against running quarterbacks in the recent past.

Even if the Birds struggle to get the ground game going, this Saints offense doesn't scare me. And it's been the really good offenses (read: QBs) that have given the Eagles the most trouble this season. Against bad or even mediocre offenses, they've proven they can more than hold their own. And they're just due for a home win.

I'm supposed to hitch my wagon to Trevor Siemian and/or Taysom Hill? Get real.

I've partially bought in, which means the kiss of death (or, I mean, Joe, which is equivalent to death) for Nick Sirianni and the Eagles. Point of references can be thrown out, because anyone can beat anyone in the 2021 NFL. I'm not a believer in Trevor Siemian, and I've become more of a believer in Jalen Hurts.

So, you know what this means, right? Siemian will look like the next coming of John Elway and throw for 5 TDs and 450 yards and Hurts will toss three picks. If Hurts and Sirianni keep improving, who knows where this can go. Maybe all the way to January 9th.

The Eagles will see a similar script play out like the last time they returned home following a huge road win. It’s just the nature of the league. The Saints lose a tough one and come to Philadelphia, where everyone gets a W. The line is incredibly short for a home team, mainly because of how tough New Orleans is against the run.

This will be a huge test for the Eagles offense, but I don’t think they are prepared enough to pass it. Not because of their talents, but rather their tutor. Just throwing a guy out there and having him run RPOs isn’t going to work when the Saints take away the ground game. I shudder to think of a box score with Hurts throwing 50 times, but I fear this is the weekend. Don’t worry, we’ll just be told it was part of the “game script” as Nick Sirianni shows up on Monday in a Jim Gardner T-shirt.

It's strength vs. strength Sunday when the Eagles' suddenly-vaunted ground game clashes against the Saints' No. 1 ranked run defense. The Eagles, of course, have been upside down for much of this season, a more-than-solid 4-2 on the road and a dismal 0-4 at Lincoln Financial Field, albeit against solid competition that has included San Francisco, Kansas City, Tampa Bay, and the LA Chargers.

Next up is another potential playoff team in New Orleans but this Sean Payton team will be minus Jameis Winston, never mind Drew Brees, with journeyman Trevor Siemian, and perhaps some Taysom Hill mixed in. The playmakers are also not what the Saints are used to with no Michael Thomas although talented running back Alvin Kamara did return to practice in a limited fashion and could be in line to return this week.

A win would be big for multiple reasons when it comes to the Eagles with Nick Sirianni's first win at the Linc actually pretty far down on the list. The way things are shaking out in the NFC means just about everyone outside Detroit has a shot at the final playoff spot over the next two months and a win by Philadelphia would give them tiebreakers over Atlanta, Carolina, and the Saints.

Even bigger than Kamara's health is the status of starting offensive tackles Terron Armstead (knee/shoulder) and Ryan Ramczyk (knee), perhaps the best duo in the NFL when clicking.

The thought here is that the Saints are a little too banged up and Jalen Hurts makes one more play than Simien in the fourth quarter, giving Philadelphia its first home win of the season.