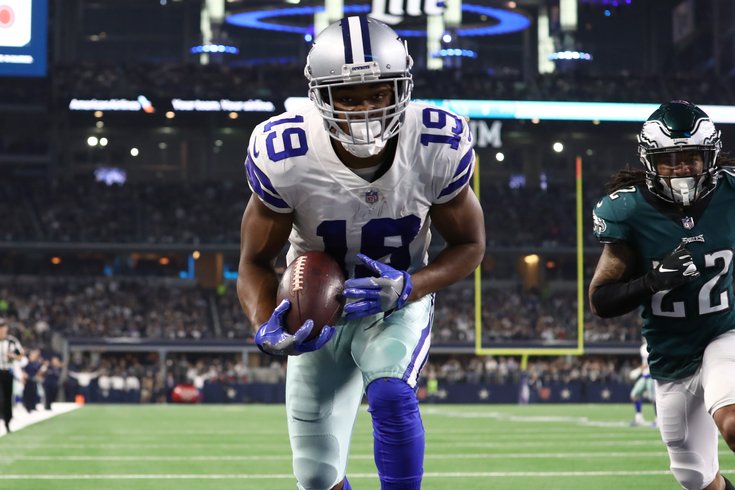 The Eagles head into Dallas on Sunday looking to get back on the right side of .500 with a win over the Cowboys, who, like the Eagles, also enter the game at 3-3 on the season.

The winner will take sole possession of first place in the NFC East, and the loser runs the risk of falling into a second-place tie with the Giants, who could improve to an unexpected 3-4 with a win over the Cardinals on Sunday.

As you can see, it's imperative the Birds pick up a victory in Dallas, otherwise things could really start to unravel in Philly. As we do every week, let's take a look at some numbers to keep an eye on in this one in the form of our five over/unders...

That's the current total being offered over at Bovada, and it seems about right. It's a relatively high number for an NFL game, but given the state of the Eagles defense — and the surprising health of the Cowboys offense — it might be a little low. Five of our six writers have this one easily hitting the over, with only sports editor Evan Macy predicting a sub-50 total (44 points). Our other five writers a predicting an average of 58.2 total points.

Both these offenses can score, and there should be plenty of that on Sunday night in Dallas.

In two games against the Eagles since joining the Cowboys, Amari Cooper has torched Philly to the tune of 16 receptions for 292 yards and three touchdowns. It was looking earlier in the week like the Birds might catch a break with Cooper still nursing a quad injury, but the latest reports suggest that the game-breaking wideout will take the field on Sunday night, however it's still unknown how much that injury will hamper his performance.

Against this Eagles secondary, however, it might not much matter — and yes, that's even with the team getting cornerbacks Jalen Mills and Ronald Darby back for this one. Mills hasn't played in nearly a full year, so there's no telling how much he'll actually help. And as for Darby, he was getting absolutely torched game in and game out before he went down with a hamstring injury.

While it's nice the Eagles will be getting some depth back at secondary, they still lack the type of shutdown corner needed to stop a guy like Cooper. Maybe one more time getting scorched by an opposing wideout — this time with Mills and Darby back — will finally prove to be final straw in forcing Howie Roseman's hand ahead of the NFL trade deadline. In that same vein, Eagles fans should be rooting for the Broncos (Chris Harris Jr.) and Cardinals (Patrick Peterson) to lose this weekend and perhaps open the door to a trade for one of those players.

As for Cooper against the current Eagles defense, take the over.

Wentz vs. Dak — that's the real debate here, right? So, let's set an over/under for just that purpose. So far this season, Prescott has the edge in this category, largely due to his higher completion percentage (69.7% compared to 61.2%) and the fact that he is averaging 71 more yards per game than Wentz (314-243). Wentz, however, has a better TD-INT ratio at 12-3, while Prescott is at 11-6 through six games. All of that leads to Prescott having a 102.9 to 94.3 advantage over Wentz in passer rating.

So what does that mean for Sunday? Well, it means the safe bet is on Prescott, especially since he'll have his full complement of receivers, even if Cooper isn't at 100%, while Wentz is still anxiously awaiting the return of DeSean Jackson to help open up the field to the rest of his receivers. Add to that the very much in-flux Eagles secondary and the Birds' penchant for dropping passes, and things seem to be lining up for Dak in this one.

Now, if we're talking about who the better quarterback is...

The Eagles inability to create turnovers was a big problem for them last season. This year, for the most part, they've been much better in this area, and are currently tied for 10th in the league with 10 turnovers through their first six games. Unfortunately, it hasn't translated to much in the win column. The Eagles are 2-2 in games where they've forced multiple turnovers and 1-1 in games where they haven't forced any. That, however, has been complicated by the Eagles offense, which has turned the ball over multiple times in three of their six games, including a pair of games in which they completely negated multiple turnovers forced by the defense.

Enter the Cowboys, who didn't turn the ball over once in their loss to the Jets, but did turn the ball over six total times (three times each) in their their preceding losses to the Saints and Packers. In fact, Dallas is 3-1 this season when they turn the ball over one time or fewer and are 1-2 in games with multiple turnovers. Clearly, takeaways are going to be big in this one. It really all depends which Eagles defense shows up, and after last week's performance, despite their two takeaways against the Vikings, it's hard to trust them to get the job done.

By this time last year, Zach Ertz was already up to 48 receptions on the season, an average of eight per game, and was well on his way to setting a new single-season NFL record for receptions by a tight end.

This year? Not so much. Ertz is averaging just 5.5 catches per game (33 total) and is down nearly 20 yards and more than two targets per game from last season.

On Sunday, things won't be getting much easier as he faces a quality Cowboys linebacking group. However, they haven't been as great against opposing tight ends as you might expect, allowing the fifth most receptions per game (5.8) and the sixth most yards per game (58.5). So, will Ertz surpass his average in this one? Considering we're expecting a shootout in Dallas on Sunday night, we'll take the over here.

MORE: Philly Godfather: Take the Birds and points vs. Cowboys