Five positions to begin to watch at Eagles OTAs 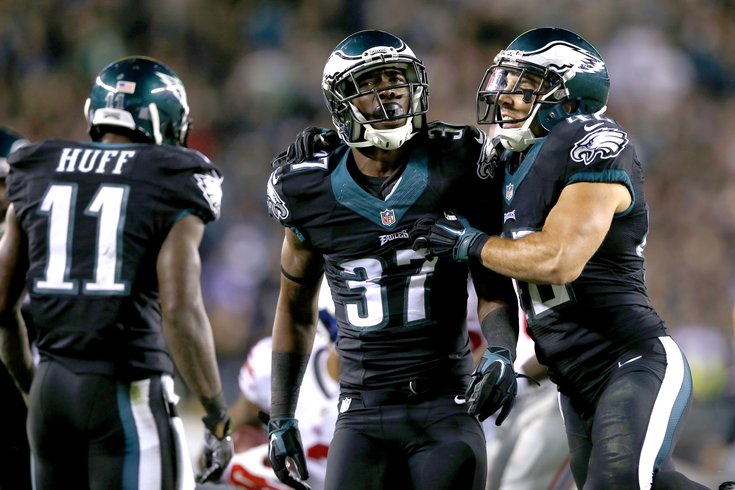 Next week the Eagles will kick off the OTA portion of their offseason, beginning on May 26th. Media will be able to watch a practice for the first time since last year on May 28th. Obviously, everything that Sam Bradford does (or doesn't do) will be beaten to death by us media folk from the onset of OTAs all the way through until Week 1 of the regular season, but here are some other positions to keep a close eye on when the Eagles take the field.

Safety: Hard to keep track of what's going on there

The Eagles are set at one safety spot, with Malcolm Jenkins. And then there are all kinds of contenders to be the "other safety," which are broken up into three buckets:

1) Actual safeties: This would include guys like Earl Wolff, Jerome Couplin III, and Ed Reynolds. Wolff is clearly the leading contender to start among this group.

2) "Versatile guys" who have played safety at some point, or could get some looks there: This would include Jaylen Watkins, Nolan Carroll, Walter Thurmond, E.J. Biggers, JaCorey Shepherd, and Randall Evans.

There could be 11 or more guys competing for the starting safety job opposite Jenkins. That's going to be a confusing competition.

Cornerback: Eric Rowe vs. himself

Second round pick Eric Rowe also has experience playing safety, but Chip Kelly said he'll start off at corner initially. This is the correct move, in my opinion. While the safety position has been a major problem area for the Eagles for more than a half decade, the more important position is corner, and it's not as if the Eagles don't have major issues there as well. If Rowe doesn't pan out at corner, you always have the option to move him to safety, but the reverse transition is harder.

The Eagles would love to see Rowe outright win the CB2 job opposite Byron Maxwell, and he'll have every opportunity to do so. He'll have to fend off competition from the "versatile guys" noted above in the safety group, as well as Brandon Boykin, if you buy that the Eagles will actually give him a fair chance to win a starting job on the outside (which I don't).

Running back: How will the new faces be deployed?

The running back position obviously underwent some major changes this offseason. LeSean McCoy and Chris Polk are out, DeMarco Murray and Ryan Mathews are in. We won't see how their carries will be split in OTAs, but at least we'll get our first looks at them.

Inside linebacker: The logjam

The Eagles are bloated at ILB. They have Kiko Alonso, DeMeco Ryans, Mychal Kendricks, rookie third round pick Jordan Hicks, Brad Jones, Najee Goode, Emmanuel Acho, and Brandon Hepburn on their roster at ILB. They also have Marcus Smith and Travis Long, who both got looks at ILB last year. If you think of the Eagles' top three wide receivers as Jordan Matthews, Nelson Agholor, and Josh Huff (as I do), then the Eagles have the youngest set of 1-2-3 wide receivers in the NFL. In his first season in the NFL, Matthews worked almost completely out of the slot, even in practice. He said he will be getting more looks on the outside this year, as he should, but OTAs will be our first chance to confirm that with our own eyes.

Matthews, Agholor and Huff all have the ability to play both on the outside and in the slot, so it will be interesting to see how the Eagles try to dictate matchups by moving them around.