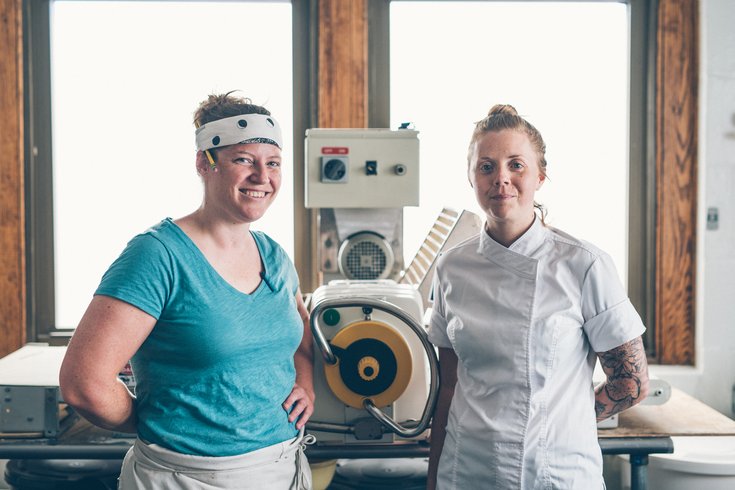 This past spring, Emily Riddell and Katie Lynch opened Machine Shop Boulangerie on the fourth floor of the Bok building at 9th and Mifflin streets in South Philly.

To put it into their own words, duo Katie Lynch and Emily Riddell “eat, sleep and drink baking.”

At 2 a.m., far before the sun gets up to rise, the two head to the Bok Building to begin bathing their hands in flour until the sun sets each night. In their window-lined “office,” the two quickly get to work on churning out dozens upon dozens of croissants, along with a curated variety of breads, cookies and other novelties.

Lynch and Riddel are the owners of Machine Shop Boulangerie, a wholesale bakery production that began just under two months ago, but is already seeing quite a bit of buzz. The boulangerie’s treats, like the buttery au pan chocolates and the vanilla-scented kouign-amanns, can be found at eight cafes across the city, from Menagerie Coffee in Old City and Elixr in Center City to East Passyunk's Laurel, where they sell bread. 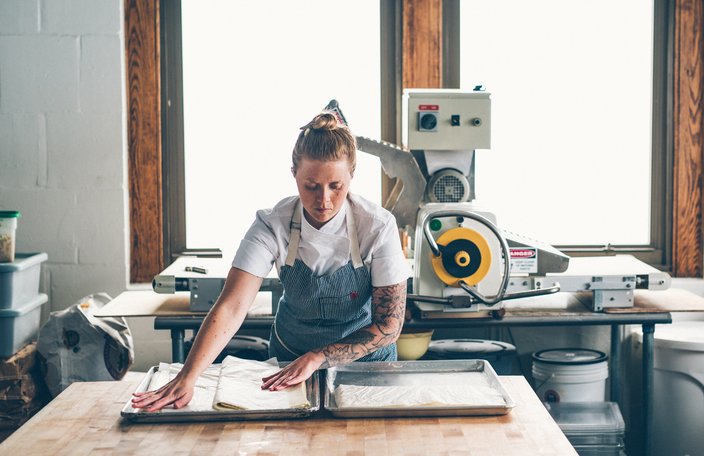 The Machine Shop Boulangerie is located inside the Bok Building at 1901 South 9th Street in South Philly.

While fairly young (both Lynch and Riddel are 30 years old), the two have an impressive history of experience. Lynch studied at Johnson & Wales University while Riddel graduated from Le Cordon Bleu in Paris. After school, the two went on to work under various notable names in the business, including Georges Perrier, the famous, French-born, Le Bec Fin Philly chef whose projects would eventually bring Lynch and Riddel together.

We sat down with the two bread and pastry devotees to learn more about how they joined forces to create Machine Shop Boulangerie and their secrets to the perfect croissant.

Your background is admirable. What do you think from your experiences has been the most valuable?

KL: The variety of places I’ve worked -- in terms of variety in location, style, actual product that you’re making, high volume bakeries vs. restaurants vs. retail. I’ve baked bread at least a dozen places over the past 10 years.

ER: I’d say the time I spent in France and being with chefs there who take this profession so seriously. It’s their art. That set the tone for my personal focus. It’s all they do -- they eat, sleep, drink -- this one thing. 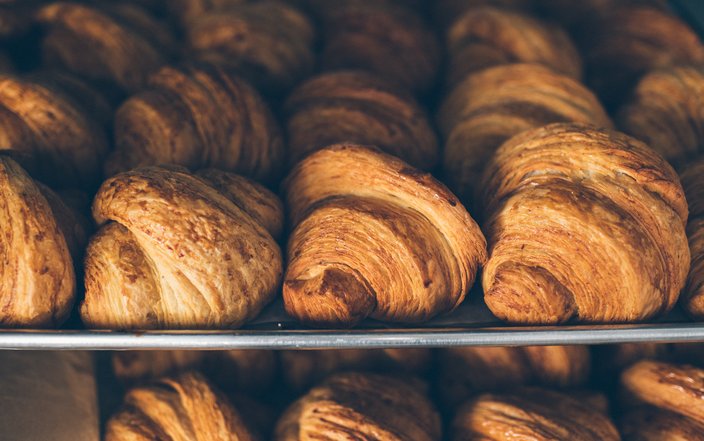 Lynch and Riddell say they “eat, sleep and drink baking.”

So I gather that’s what each of you is doing right now. How much sleep would you say you typically operate on?

You met working together, right?

ER: Katie was hired to open the Art of Bread, the bakery that George Perrier opened in Narberth, which was connected to Le Bec Fin, where I was working as the pastry sous chef.

After going off to do other things, what led you to reconnect and launch into something of your own?

KL: You get to a point where you start to have ideas of your own. Teamwork makes the dream work, and instead of us going out on adventures individually, it was like, let’s put our brains together and create something.

ER: At the end of my last project, I called up Katie, and we just started chatting about doing a project together. 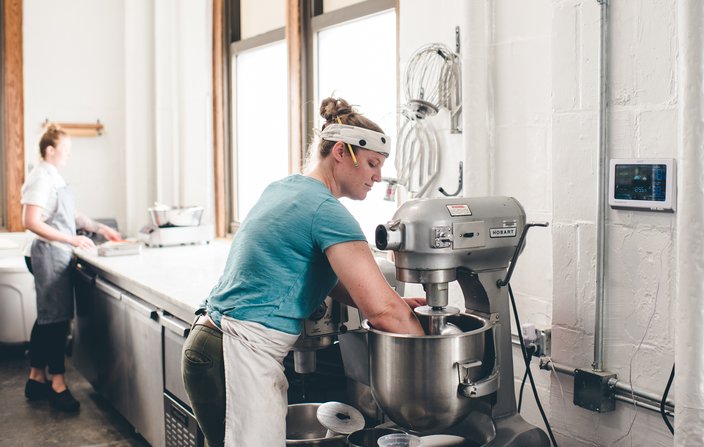 For Lynch and Riddell, making quality croissants is a three-day process.

How did you get the project going?

KL: When Emily proposed this thought, I said, “Well we should probably grab a beer and go to Chinatown and have noodles because that’s where all the best decisions are made.”

What were the primary reasons for launching as a wholesale business versus a retail outlet?

KL: If you were to line up all the reasons, finances would top the ingredient list.

ER: Opening a retail space takes so much more capital, but you also have to staff it and make sure you have the right people to represent you properly.

How did you settle on the Bok?

KL: The concept of it is pretty fantastic, and they seemed pretty excited about us being here. It’s really nice when your landlords genuinely appreciate your presence. What we do is pretty industrial and vocational, and with this previously being a vocational high school, it felt right.

How many croissants are you making on a daily basis?

ER: Around 200, between the different varieties.

Do you both have a favorite pastry that you make?

Can you tell me a bit about that?

ER: It’s a pastry from the Brittany region of France, and it’s having a bit of a renaissance. It’s the croissant dough, but inside it gets a sugar, salt and vanilla mixture that’s incorporated between every layer. 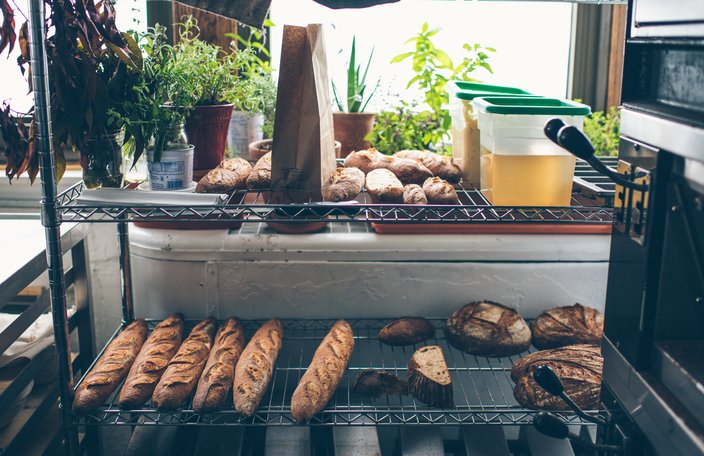 What would you say is the most creative pastry that you’re putting out?

KL: We’re both classically trained and have a traditional inspiration. But we utilize a natural sourdough starter in our croissant, which isn’t traditional. Same with our almond croissant -- we want it to be traditional in style, but we toast the almond flour to give it an extra oomph.

ER: We try to give everything a bit more thought. How can we make every product just a little better? For instance, whenever I’m out somewhere eating a pan au chocolat, I am wondering, why am I not getting chocolate in every single bite?

What percentage of your ingredients are local?

KL: As much as possible. It’s like green beans -- they taste better in the summertime when you get them from the stand on the side of the road. It just makes sense.

ER: To us, using things that are close to us makes our product unique to the place that we’re in. It makes sense environmentally, too.

Speaking of ingredients, how many pounds of butter do you go through on a weekly basis?

In terms of croissants, why are there so many terrible ones out there in the world?

ER: (Laughs). I don’t feel totally comfortable answering that question...It’s a labor intensive process and you need to be very precise. It’s a three-day process for us. We have to feed the starter, and that starter has to mature. Then we mix it into dough, and that dough has to ferment overnight. Then I can laminate it, and then we bake it the next morning. There are opportunities to mess up at every step of the way.

Do you have a dream client you’d like to sell to?

KL: When I found out about Vernick and the portion of their menu dedicated to toast, I thought, “I must be their best friend.” It’s a little restaurant crush I’ve had for quite some time.

Plans for the future? Are you going to do a retail store and if not, what is your vision?

KL: Our short-term future plans are to have a beach day – for one, full day.

ER: We’ve talked about retail, but there’s no solid plan.

KL: We could see ourselves doing more pop-ups, like we do here for the Bok tenants and maybe farmers markets in the future.