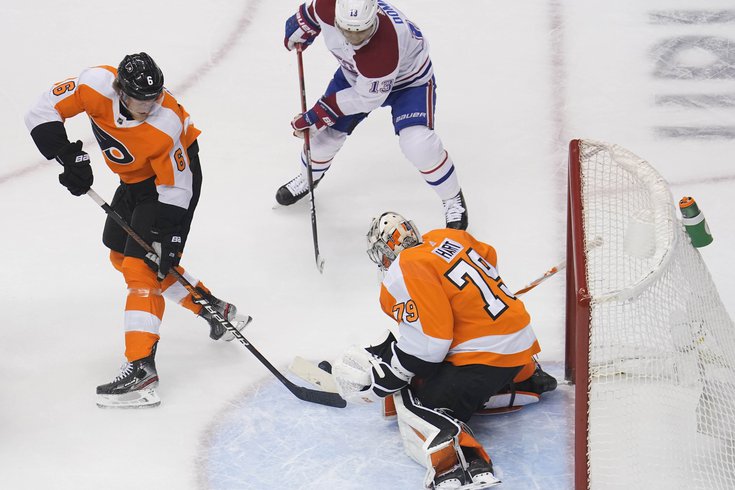 Carter Hart showed he was human, falling back to earth a bit in Game 5.

Every time you think the Flyers are invincible, they show us that success — in every walk of life, especially in sports — is elusive.

In a game jam-packed with goals, penalties, elite performances and epic mistakes, the Flyers saw their series lead dwindle a bit to 3-2 in a 5-3 setback to the Canadiens in Toronto Wednesday night.

Jake Voracek was revelatory in the loss, scoring twice and adding an assist, but the rest of the offense fell flat despite a bevy of opportunities, and Carter Hart fell back to earth. Here's more on that, with three reasons why the Flyers failed to close out Montreal in Game 5.

Hart's goalless streak didn't last long into Game 5, as a big rebound off the board behind the net gave Joel Armia a wide open shot which trickled passed the goaltender. The strike came, punishingly enough, on the Flyers' first power play of the game.

It's somewhat ironic, when you think about it, that the Flyers anemic power play unit (which had scored just once inside the bubble before scoring three in Wednesday's game) was their undoing (at least early) as they trailed for the second time since... well... March after relenting the early goal.

It was Montreal's first goal in 132 minutes and 18 seconds of ice time.

Hart got another piece of bad luck, as an Armia shot hit the Flyers' goalie square in the shoulder, took a hop into the post of the net and fell inside the net, evening things at 2-apiece midway through an action packed second period.

A third goal for the Habs came seconds into a double-minor power play, as Brendan Gallagher saw a shot on net and turned his stick into a baseball bat, swatting it past Hart to give Montreal yet another lead. A potential fourth, a simple wrist shot from Nick Suzuki right through Hart's five-hole and nearly beckoned Brian Elliott from the bench, was called back due to an offsides call (after a review). Hart was literally yanked from the game and then kept in when the score remained 3-2 after the replay.

A natural question to ask — and Alain Vigneault will not doubt be asked it — is whether giving Hart the start one day after his Game 4 shutout was the right move. Elliott was solid in his tune-up game in the round-robin, and Hart will certainly be needed (and perhaps exhausted) in Games 6 and 7.

Then again, he is 22 years old, so he'll probably be fine.

A brutal hit to the upper body by Jesperi Kotkaniemi that smashed Travis Sanheim face-first into the boards gave Philly a five minute power play. Could Philly take advantage... finally?

Voracek made them pay, ripping a shot passed Carey Price less than a minute into the major penalty (off assists from Claude Giroux and Ivan Provorov). It was their first power play goal in their last 18 attempts.

The team had a noticeable extra boost of energy knowing this was a potential turning point, and Jake the Snake did it again, finding a sliver of daylight right at the net and using a ricochet off a defenders skate to put the Flyers up 2-1 in a flash. The goal gave Voracek (at the time) 43 percent of the Flyers goals in the series.

It's that kind of series. No goals in 18 power plays leads to two on one power play because, why not?

Voracek continued to carry the Flyers on his back, firing a perfect assist to Joel Farabee right in front of Price midway through the third. The game was very briefly tied at 3.

But then, in the time it took to write this sentence the Habs broke the tie seconds later when Suzuki beat Hart, making the tally 4-3.

Our first look at the desperate Flyers came when they pulled Hart and threw six skaters at Montreal, but none of their bullets at Price (who had 30 saves in a fantastically played game in net for the Habs) hit their target. The Canadiens were able to tack on an insurance empty-netter as time wound down.

Montreal, when at its best, fires tons of pucks on goal and uses its speed to create chances. For whatever reason, the Habs looked spry Wednesday night as they were able to play their kind of hockey game for the first time since Game 2.

The Flyers may not have looked completely gassed, but the desperation the Canadiens faced as they looked elimination in the eyes definitely seemed to lift them at times in Game 5. A physical, low-scoring game fueled Philly to victory (as did back-to-back Hart shutouts) but that's a difficult style to maintain over a best-of-seven series.

Philadelphia has never been good at playing from behind, and in 27 instances when trailing heading into the third period, the Flyers came back to win just twice during the regular season.

Well also add, for like the seventh time, that none of the Flyers top regular season goal scorers (Travis Konecny, Kevin Hayes, Sean Couturier, Claude Giroux and James Van Riemsdyk) have scored yet in the series.

There are a lot more questions surrounding the team now than there were 24 hours ago. They'll have two more chances to clinch the series, the first coming Friday.