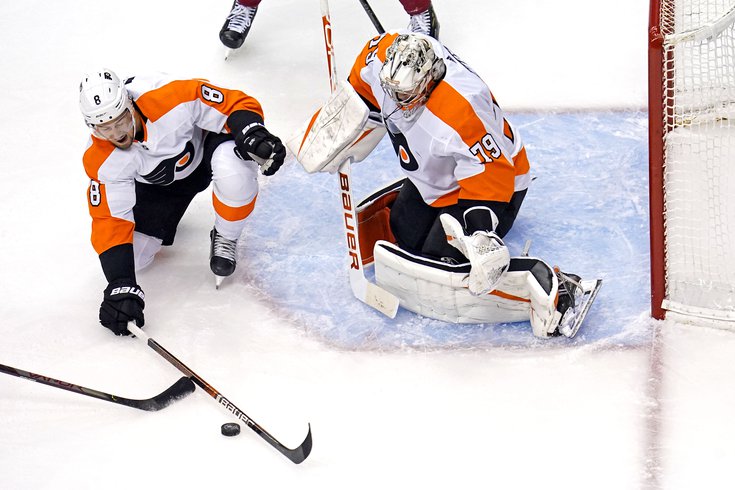 Carter Hart was, once again, incredible in the #Flyers Game 4 win.

It feels almost wrong to take a Carter Hart playoff shutout for granted, as if it was expected.

But it has become expected, as Hart has been the best Flyer on the ice this entire postseason (even though he allowed four goals in Game 2). And we assure you, we are not taking him for granted, we just want to mix things up a bit.

Hart was incredible — again — in his second consecutive shutout, a 29-save performance, as the Flyers seemingly breezed to a 2-0 victory and 3-1 series lead over the Canadiens on Tuesday. He was a wall in net, made great decisions, and continues to help make the Flyers an ever increasing Stanley Cup Championship contender. Their odds — which began in the bubble at +1000 according to TheLines.com's odds from FanDuel — will become even better following the win. They now need one more win to advance to the second round, and can accomplish that on Wednesday

But let's not get ahead of ourselves. Before we reach for a series win, let's look back at Game 4's win and what (in addition to Hart) propelled them to victory:

Michael Raffl technically was back a few games ago after sustaining a minor injury during the Flyers' round-robin play, but he scored first for the Flyers, the fifth time this postseason they've taken the early lead (they are 5-0 when scoring first), on a wrist shot that was just impossible for Carey Price to thwart:

The goal came on the Flyers' sixth consecutive shot on target to start the game, and was followed up by a power play opportunity which saw a quality chance but no second goal.

It's worth noting that the Flyers shook up their lines to try and compensate for the lack of success from their top goal scorers so far in the playoffs.

Lines are stabilizing a bit and it appears they are:

Maybe? At least until there's another round of changes. Flyers honestly look pretty decent so far, in any case.

Through seven games now in the postseason, none of the Flyers' top five goal scorers from the regular season have contributed one. That includes Travis Konecny, Kevin Hayes, Sean Couturier, Claude Giroux and James Van Reimsdyk (who was a scratch Tuesday). Expect to see more line combinations experimented with in future games as Alain Vigneault tries to find his top forwards' scoring touch again.

The Canadiens are making so many helpful mistakes, the Flyers will need to send formal thank you cards up north after they win the series. Time after time, Philly has turned it over in its own end and has seen a Montreal player whiff, shoot wide of the net, fall down — do anything but score. It's as if they keep missing two-foot par putts. Or missing wide open layups. Or dropping sure touchdowns in the end zone. You get the idea.

Philadelphia made frustrating turnovers, and while their forecheck and neutral zone defense were spectacular — and they were usually pretty good when backed against their own goal — the Flyers felt as if they turned it over more than the Sixers did Monday night.

Philly remains pretty bad on the power play, and went nearly 14 minutes into the second period before getting a shot on goal in the stanza. They were out-shot 28-22 but Hart stood tall and the defense made sure that many of the shots were of low danger level.

Speaking of defense, the Flyers got their second strike from Phil Myers, who saw a shot from deep trickle under Price's blockers to give Philly breathing room for the first time since the round robin.

Getting offense from defenseman is nothing new for the Flyers — their D-men led the league in the statistic during the regular season. The unit is also the catalyst for Philadelphia's offense as a whole, as several of the team's blue liners lead in total shots on goal throughout the series with the Habs.

This is either an impressive look at aggressive and talented defensemen, or a window into just how sluggish the Flyers' typical attackers have been so far in the bubble in Toronto. Flyers' defensemen also block a ton of shots, which helps to create offense when shots fired by Montreal miss their target and carom down ice.

The defense — led by Hart of course — has not allowed a goal in 130 minutes. Can they keep it going? Check back tomorrow at 8 p.m. when the puck drops in Game 5.