What they're saying: Flyers beating Canadiens at their own game, and frustrating Montreal in the process 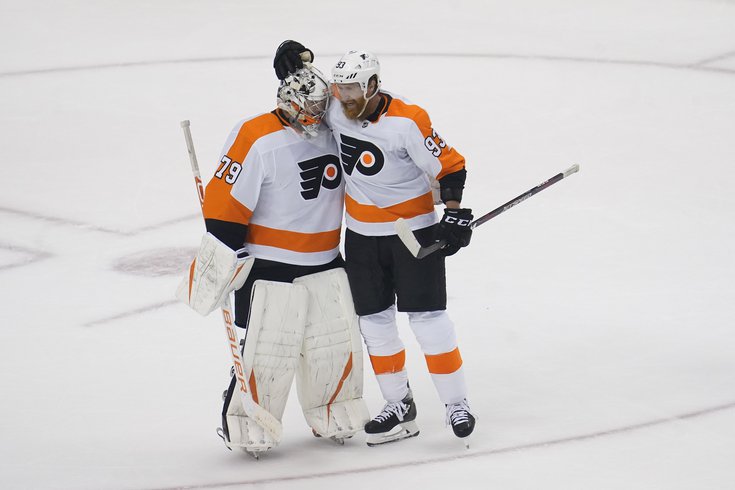 The Flyers were able to grind out a 1-0 win over the Canadiens in Game 3 of their first-round series, taking a 2-1 lead over Montreal heading into Tuesday's Game 4 matinee in the Toronto bubble.

It wasn't the pretty win for the Flyers, but it was big one nonetheless, as the Orange and Black needed to take back control of the series and avoid falling behind a team many expected them to handle easily in the first round. But just because the Canadiens entered the bubble as the Eastern Conference's 12th overall seed doesn't mean they should be taken lightly. After all, they dispatched the Penguins in the play-in round and when Carey Price is on, he's extremely tough to beat.

Still, the Flyers, despite being outscored 6-3 overall in the series, have the lead and will look to put some more distance between themselves and Montreal on Tuesday afternoon. If they can win that game, they'll have the chance to wrap up the series on Tuesday night in Game 5. If not, the series could swing entirely, and its could be the Canadiens in control by the time you wake up on Thursday.

In the meantime, let's take a look at what they're saying about the Flyers before they head into these important back-to-back games...

Beating Habs at their own game

There might be a reason the Flyers don't look quite like they did during the round-robin games — or even during the regular season for that matter. That's because their opponent has been dictating the kind of series this has been. As Charlie O'Connor of The Athletic writes, it's actually impressive that the Flyers have twice been able to beat the Canadiens at their own game, a game they were specifically designed to thrive at.

Unfortunately, if the Flyers don't change things up, this series isn't going to get much prettier any time soon.

So facing the possibility in Sunday’s Game 3 of losing control of the series to a team many expected them to dispose of in short order, the Flyers didn’t dazzle Montreal with their skill advantage. They didn’t flummox their opponent with the dynamic offensive attack that ranked seventh in goals per game during the regular season. Instead, for 60 minutes in a 1-0 Game 3 victory, the Flyers outworked Montreal. They out-pressured Montreal. They out-goalied Montreal.

Essentially, they out Montreal-ed Montreal. ...

If this is the type of series it’s going to be the rest of the way, it’s not going to be aesthetically pleasing. Only one goal was scored Sunday — a Claude Giroux perimeter shot turned beautiful-in-its-ugliness deflection tally by Jakub Voracek five minutes into the first period. Aside from that, there were only 11 high-danger scoring chances the rest of the game, per Natural Stat Trick. The clubs combined for 43 total shots on goal, and 2.50 expected goals at even strength, per Evolving-Hockey. Philadelphia and Montreal wasted a combined nine power-play opportunities, usually in car crash-like fashion. This game was about disruption, not creation; frustration, not satisfying catharsis. ...

Some might come away from Game 3 thinking the Flyers were outplayed again, but that’s not what the numbers say. Even setting aside their 6-3 advantage in power-play opportunities — which was largely driven by the high-energy approach that drew the penalties in the first place — Philadelphia finished with more regular scoring chances (17-15) at even strength. It finished with more high-danger chances (5-4). It had more score-adjusted expected goals at even strength (1.42-1.08) and in all-situations (2.13-1.43).

The Flyers didn’t luck into this win. Hart didn’t steal it for them. Shift by shift, inch by inch, they earned it.  [theathletic.com]

And for those skeptics Charlie alluded to above, he put together a nice Twitter thread on Monday to show his followers that despite how ugly it may have looked, the Flyers actually put together a pretty impressive win in Game 3.

A couple things on last night's game, to counter what seems like a barrage of complaints about the Flyers in the wake of what I viewed as a pretty damn impressive victory: (thread)

2. A good self-test here is your view of the 3rd period. If your initial thought was that the Flyers turtled and parked it, re-evaluate that. PHI led in scoring chances 9-3 in the final 20 minutes. They gave up very little & created more than you may have thought. Good period.

4. Yes, the PHI offense/PP haven't been good. Ideally they'd be rolling (especially the PP). But teams that can only win one way don't go far. The last 2 games they were forced to play this bleh style if they wanted to win. Last night, they proved they could. That's important.

Hart is 'oblivious' — in a good way

It shouldn't come as a surprise to anyone who has watched the Flyers' two wins in this series that a big part of the reason they hold a 2-1 lead is the play of their now-22-year-old goalie, Carter Hart. The shutout wasn't the most impressive thing about his Game 3 performance either, it was the fact that it came on the heals of a 5-0 defeat in which Hart was pulled late in the second period.

Coming back from that to provide a clean sheet? That's something you'd expect from the guy on the other end of the ice (Carey Price), not the kid who grew up idolizing him.

“We were able to grease it out, and Carter made some big saves,” coach Alain Vigneault said. “... It was hard to make offensive plays. Both teams were not giving a lot of room on the ice. You’ve got to grind these out.”

Hart robbed Jesperi Kotkaniemi, who came in alone after an Ivan Provorov miscue, to preserve the win with 50.4 seconds left.

In the previous game, Hart, though not at fault, was pulled late in the second period as the Flyers fell behind, 4-0.

“It’s a good thing he’s a little too oblivious to some things [like] being a goalie in Philadelphia,” cracked Voracek. “He’s very strong mentally. He’s pretty impressive the way he bounces back. That’s what good goalies do.”

“I just have to do my job. That’s what it comes down to at the end of the day,” Hart said. “We have a great crew in front of us that makes my job a lot easier.”  [inquirer.com]

The Flyers may have had a little extra motivation on Sunday night as forward Oskar Lindblom, who completed his cancer treatment earlier this summer joined the team for their morning skate in Toronto.

There's a chance Lindblom returns to the ice if the team is still playing in September, but just having him out there for practice seemed to provide a little lift, and possible help them turn the page on that 5-0 loss on Friday. There's no way seeing Lindblom didn't provide a little much needed perspective on what's really important...

Just ask head coach Alain Vigneault what it meant to have Lindblom at the center of the ice leading stretches after Sunday's morning skate, to the tune of powerful stick taps from his teammates.

The coaches were almost in tears," Vigneault said in a video interview. "When you think about everything that Oskar’s been through, everything that our team has been through, showing the support and going through the different stages, to have him back — every team at the end has a team stretch where a lot of times comments are made about certain things, but today was all about Oskar and the excitement to have him back with our group.

"Today was his first official time that he skated with his teammates since the news [of his diagnosis]. I think he was real nervous, real excited to be back with the group. The group was obviously ecstatic to have him back, even though it was just a morning skate. Great young man, beautiful smile, happy to have him around.

Perfect timing, as well, for both the Flyers and Lindblom. The Flyers are in the midst of their best-of-seven first-round playoff series with the Canadiens, a set that was tied 1-1 entering Sunday night's Game 3. Lindblom just enjoyed his birthday and has long been pushing (and recently waiting) to join the boys.  [nbcsports.com]

Perhaps unsurprisingly, the Flyers went out and won that night.

And now, let's check in on what they're saying up in Montreal, where one of the Canadiens leading scorers has yet to find the back of the net inside the bubble ... and the frustration is starting to mount.

Gallagher didn’t score when the Canadiens eliminated the Pittsburgh Penguins in four games in the qualifying round this year and after Sunday night’s 1-0 loss to the Philadelphia Flyers he has now gone three games without scoring in their first round playoff series.

“Frustrated for sure,” Gallagher said after the game, which gave the Flyers a 2-1 lead in the best-of-seven series. “But no sense in feeling sorry for yourself. You got to find a way to battle through that. I’ve always believed you got to try and fight the urge to be frustrated … it’s a wasted emotion.

“Obviously, I’m an emotional player,” Gallagher added. “You got to control that side of it. It’s not so much the process right now, it’s more the results. But it is frustrating because the guys in there worked their bag off and you’d like to be able to contribute and help them out. A game like today, where it’s as tight as it is, I’m put in positions to produce and that’s my role on this team. You can say all the right things, you can be in all the right places, but if you don’t get results then you just got to find a way to work through it and that’s where I’m at right now. I’d be lying if it wasn’t frustrating, but the next change you do the same things you’ve done your whole life and find a way to just kind of power through it.”

The Canadiens outshot Philadelphia 23-20 and their penalty-killing unit was fantastic as the Flyers went 0-for-6 on the power play, including a four-minute opportunity in the first period when Jesperi Kotkaniemi was given a double minor for high-sticking former teammate Nate Thompson. The Canadiens went 0-for-3 on their power play.  [montrealgazette.com]

Speaking of players who have yet to find the back of the net, the Flyers have more than a few. One of them is Kevin Hayes, but the folks over at NHL.com have him penciled in as one of their daily fantasy picks for Tuesday. Could he bust out of his scoring slump?

Kevin Hayes, PHI (vs. MTL) -- The Philadelphia Flyers center is still seeking his first goal of the postseason (none on 12 shots on goal in six postseason games) and has not had a point over the past four games but still leads them in assists (four; all at even strength). Hayes brings exposure to valuable right wing Travis Konecny, who led the Flyers in scoring during the regular season (61 points in 66 games), at even strength and has bounce-back appeal at a thin position on this slate against the Montreal Canadiens in Game 4.  [nhl.com]