Philly's first-round matchup against Montreal is now tied at 1-1 after a poor effort in Toronto. 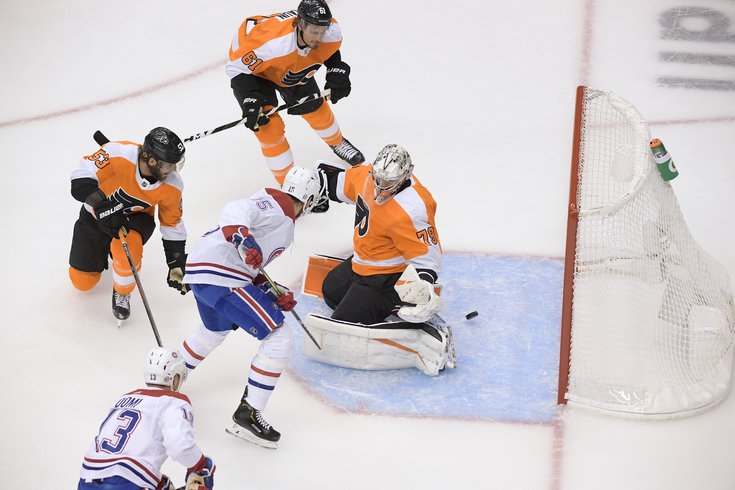 If the Flyers "didn't play their best" in their Game 1 win over the Montreal Canadiens, then they might have played their worst game of the season on Friday afternoon, dropping Game 2 to the Habs, 5-0, a loss in which they trailed from the start and never really stood a chance.

It was so bad for the Flyers that it's almost not worth analyzing. For a team that had won 13 of 14 coming into this game and had been a perfect 4-0 in the Toronto bubble before Friday, a loss this bad can almost be chalked up to them simply being due. It's one of those games where you could burn the film and move onto the next. But that's the easy way out.

Let's take a look at what went wrong for the Orange and Black in this one...

Prior to Friday's game, the Flyers had yet to play from behind in the bubble, but it didn't take long for them to give up their first lead of the postseason, with Tomas Tartar giving the Canadiens a 1-0 lead just over a minute into action. They would have added another a minute later if not for Carter Hart making a sprawling save.

Just like the rest of the team, it was a day to forget for the 23-year-old goalie, as he was pulled late in the second period after giving up his fourth goal of the day (on 26 shots). But Hart hardly deserves the blame for this loss.

From the outset, the Flyers looked a step slower than the Habs. They looked disinterested, and were playing flat, off their heals, and reacting to what Montreal was doing rather than creating the action on their own. The Canadiens recorded the first 12 shots of the game, and by the time the Flyers had finally put a shot on Carey Price — it came on a power play with just over three minutes left in the first — they were already trailing 2-0 thanks to this goal from Jesperi Kotkaniemi with 7:24 left.

What are the Flyers even doing pic.twitter.com/MSC3DfK5od

The Canadiens seemed to be content on putting a lot of traffic in front of Hart and it definitely caused some issues as he often appeared to be searching for the puck after it was shot. They outshot the the Flyers 16-6 in the first period, and it wasn't even that close.

It's really hard to put into words just how bad the Flyers looked in the first period. If you took the jerseys away, it would be impossible to tell which team was the No. 1 seed and which one entered the postseason as the conference's 12-seed. In all honestly, the Flyers were quite lucky to get out of the first period with just a 2-0 deficit. The way they were playing, it could've easily been a 3-0 or 4-0 lead for the Habs after the first 20 minutes.

Still, it was the first time the Flyers trailed by multiple goals at the first intermission in their last 15 games, according to NBC Sports' Jordan Hall.

And it didn't take much longer for Montreal to add to their lead. The first period ended with a very questionable holding penalty against Shayne Gostisbehere (it wasn't a penalty, but the play that led to it was so bad they almost deserved it), leaving the Flyers shorthanded coming out for the second. And, as you might have guessed, the Canadiens made it 3-0 just over a minute into the period.

The Flyers had more chances in the second period, but when you're down 3-0 (or worse), good chances don't mean a lot if they're not winding up in the back of the net.

The Flyers power play had struggled in their first three round-robin games in Toronto, as they went 0-for-11 prior to their series against the Canadiens. On Wednesday night, they got their first of the postseason, and they could've used at least one of those in Game 2.

The Flyers finished the game 0-for-5 with the man advantage, and while one goal wouldn't have changed much on the scoreboard given the lopsided result, the Flyers had power plays at key moments that they failed to take advantage of. And had they, it might've changed the course of the game before it got out of hand.

The biggest moment that stands out came early in the second period, shortly after the Canadiens scored to take the 2-0 lead. The Flyers got themselves an extended two-man power play for 1:38, which should be more than enough time to light the lamp. Despite several chances, they came away empty.

The fact that Konecny failed to break his stick here is indicative of the entire game for Philly.

A quick note on Konecny: He left the game in the third period after taking a shot off the outside of his ankle. He didn't appear to put any pressure on it as Carter Hart helped him down the tunnel and into the locker room.

Travis Konecny takes a shot off the foot and hobbles to the locker room pic.twitter.com/zqC2XeBbHl

Hopefully that's nothing too serious.

Another game, another big goose egg from the Flyers' top line (and top scorers in general).

It was a nice story throughout the round-robin and even into Game 1 that the Flyers were getting scoring from unlikely sources. But it's probably only a nice story while the team is winning. That's because, when your team gets blanked (let alone loses 5-0), the lack of production from the veteran leaders and top scorers — like Claude Giroux, Jake Voracek, Sean Couturier, Kevin Hayes, Konecny, and others — it becomes a glaring issue.

No matter how deep, the Flyers were never going to be able to go deep in the playoffs without getting contributions from their top stars, and it's starting to become a bit of a concern that none have found the back of the net so far in Toronto.

It's been five games. If you weren't worried about it before this one, you probably are now.

Of course, all that could change quickly, and the Flyers could come out firing on Sunday and get goals from all their top scorers. Sometimes, all it takes is one to open the floodgates, and Philly fans will need to hope that's the case if they want to get back to their winning ways in Game 3.