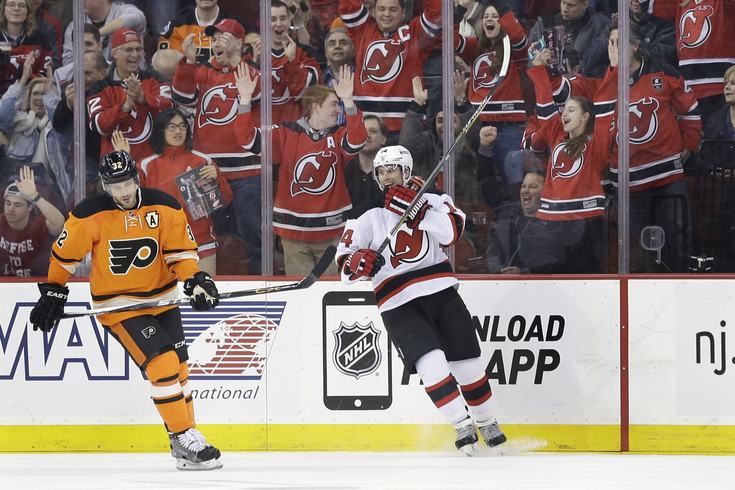 The Flyers, in desperate need of a win after the Bruins moved seven points ahead of them in the standings, fell to the Devils, 5-2, at the Prudential Center on Sunday.

For the sixth time in their last seven* games, the Flyers allowed the first goal of the game. However, that wasn't what cost them most against the Devils, as they were able to even the score shortly after to tie the game.

It was the second period -- one that was dominated early on by the visitors -- that really hurt the Flyers.

Despite allowing a shorthanded goal, the Flyers owned the first half of the period. But then something changed. Drastically. Through the first 9:26 of the second, the Flyers outshot the Devils, 9-2.*

*The only two shots they allowed came on the same rush, the first setting up Jacob Josefson's shorthanded goal. The second was the goal itself.

That was it. Over final 10 and a half minutes of the period, the Flyers failed to put another shot on backup goalie Keith Kinkaid. The Devils had the next seven shots to draw even with the Flyers, 9-9, in the frame. Furthermore, the Flyers lost seven of the last eight face-offs.

Heading into the third, the Flyers found themselves down, 3-1, after Eric Gelinas scored a power play goal late in the second. They were still in the game, but not for long.

About five minutes into the final period, Adam Henrique scored for the second time to give the Devils a 4-1 lead. The Flyers tried to make a comeback, as Michael Raffl added a shorthanded goal for the Flyers midway through the third. And just moments later, Sean Couturier missed a wide open net, which led to a Devils breakaway and goal. So much for a late-game comeback.

So much for a late-season comeback.

The Flyers had a chance gain some serious ground* on the Bruins, who were just four points ahead in the standings heading into the weekend. But after and overtime loss to Boston and Sunday's loss to the Devils (coupled with the Bruins' 5-3 win over the Red Wings), and the Flyers are suddenly back to being seven points out of the final Eastern Conference wildcard spot.

*The Flyers could have been two points out with a pair of regulation wins this weekend.

Here are some other observations on the game:

Not only did goalie Steve Mason have to deal with the absurdity that is turning the clock forward an hour, but he was also playing in his second game in as many days.

Let's hope that he was just tired, because Mason allowed the Devils to score five times on just 21 shots. Interestingly, he was never pulled from the game, even when it started to get out of hand in the third.

Perhaps he never should have been in there in the first place. Wasn't his goalie coach just fired the other day over how he handled the 25-year-old's injuries?

Or maybe Mason starting was a sign that Craig Berube put a lot of stock in this game. Either way, after an overtime loss to the Bruins in which he saw 37 shots, Mason did not need to remain in for the full 60 minutes Sunday.

After allowing two goals on the final three shots against Boston, Mason has now surrendered seven goals in his last 24 shots faced. That's not good. The seven previous goals allowed by Mason required a combined 125 shots from his opponents.

But it wasn't all Mason's fault. In the second period, the Devils' shorthanded goal came on a two-on-one rush. Their next goal game with a man advantage. Both of their third-period tallies came on breakaway attempts, one of which was a two-on-zero rush.

Hard to fault him there, even if he did only stop 16 of 21 shots. But since he's been playing so well lately, we'll give him the benefit of the doubt.

Michael Del Zotto, who was hit in the foot Saturday against the Bruins, will be out seven to ten days with with and upper body injury. That's not a typo.

Del Zotto out 7-10 days with upper body. Got hit in right foot yesterday

Whatever you say, Hexy.

In his absence, Brandon Manning got the call up, and was paired with Andrew MacDonald. He had a +1 rating in 15:36 of ice time, which included a blocked shot. He also took a minor hooking penalty in the second period, but luckily for him it didn't lead to a goal.

Nicklas Grossmann, who was out for the fourth game in a row, is still considered day-to-day with an upper body injury. The other scratch was a healthy Vinny Lecavalier. Not entirely sure what's going on there, since the guy presumably playing in his place is Zac Rinaldo.

Reunited and it feels so...meh

Claude Giroux and Jake Voracek were back together on the Flyers top line Sunday after spending a few games apart. Wayne Simmonds returned to the Sean Couturier line. Here's how they started the game:

But the reunion didn't even last a game, as Voracek went back to the second line with Matt Read and Courturier in the third period.

The third line, on the other hand, had quite a day.

They were responsible for both Flyers goals Sunday and were a combined +2 despite losing 5-2. Winger Ryan White recorded his first multi-point game as a Flyer and just the third of his career. Meanwhile, Michael Raffl scored his first shorthanded goal.

The Devils you know...

The New Jersey Devils like rubbing salt in the Flyers' wounds. Why else would they schedule the 20th anniversary celebration of their first Stanley Cup against the Flyers, the same team they beat in the the conference finals back in 1995?

That being said, their pregame celebration -- aside from the fact that it delayed the start of the game by about a half hour -- was pretty cool. That may be in part because of my strange obsession with these 3D projections on the ice (or court for NBA teams).

The Flyers next game will be Tuesday night at the Wells Fargo Center against the Dallas Stars.