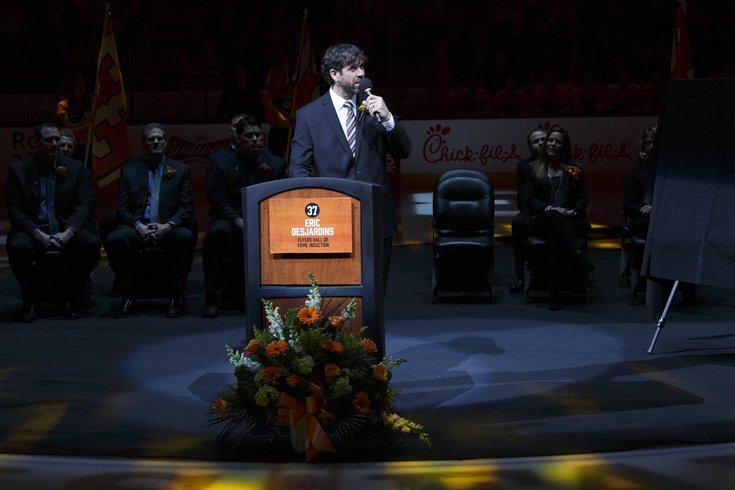 All sports fans, casual or otherwise, have that team. The one that reminds them of their childhoods. The one that will always hold a special place in their hearts. Not just because they did an exceptional amount of winning, but also because they helped create an everlasting bond between fan and team.

I was 10 years old when they went Stanley Cup Finals in 1997, but I had become a fan a few years earlier, around the time they started a decade-long run as a perennial contender.

I played street hockey in the back yard, trying to mirror my favorite players'  moves. And whenever I was in net -- I think you know where I'm going here -- my sole mission was not to stop opponents' shots, but to "pull a Hexy" and score a goal from the opposite end of the ice. When it rained or got too dark to see the puck, we -- usually my cousin Joe and I -- would take the game indoors. We'd play knee-hockey with mini sticks and nerf balls or battle it out in NHL '94 for hours on end. We were mildly obsessed.

So on Thursday night, there I was, sitting just a few feet from my childhood as Flyers legends returned to South Philly to honor Eric Desjardins upon his induction into the Flyers Hall of Fame.

Shjon Podein. Keith Primeau. Eric Lindros. John LeClair. For the first time in my career, I was in awe of the people sitting in front of me.

"He could skate, he could shoot ... he would score goals at clutch times," Lindros said. "Meanwhile if you were in need of a goal scorer here and there absolutely. He was that quiet force. He was just amazing.”

I tell you this not to undermine my credibility as a journalist -- it's probably too late for that anyway -- but to prove that even the most cynical people can at times view the world through a child's eye. I wasn't thinking about contracts, trade rumors or any of the "adult" problems that seem to dominate the sports landscape these days.

Maybe they were there. I'm sure a much older writer will put me in my place, telling me those issues are not unique to the 2015 version of sports. But they didn't exist in my 10-year-old mind. It was just sports and it was pure. There were no hot takes. Just the game. Just the players.

And Desjardins was one hell of a player.

He joined the Flyers during the 1994-95 season after seven years with the Canadiens. That season, the Flyers made the playoffs for the first time in five years. They would go on to make the postseason* in each of Desjardins' 11 seasons in orange and black.

*Remember that decade-long run I talked about earlier?

Maybe not so coincidentally, Montreal -- who went to a pair of Stanley Cup Finals* with Desjardins -- failed to make the playoffs for the first time in 25 years the season they traded the offensively gifted defenseman to the Flyers. In fact, they only made the postseason in three of the next seven season, and didn't advance past the second round until the 2009-10 season, well after Desjardins retired.

In a way, Desjardins, now 45, changed the course of the Flyers franchise. He was a special player, as was evident by the things his former teammates had to say about him.

"When I look back at it, the backbone of the success that we had when I was here and the reason why, Eric was the reason why," said LeClair. "Without him back there and the way he controlled the game and the things that he did, that honestly helped us so much as forwards. I had the opportunity to play with him a lot, in Montreal and here, I don’t think other people realize how much of an asset he is and what he does for everybody on the ice.”

LeClair, along with Gilbert Dionne, was part of the deal that brought Desjardins to Philly in exchange for Mark Recchi. And having other players going through the same adjustments certainly helped, according to Desjardins.

“It’s always tough to get traded," the Montreal native said prior to his retirement ceremony. "It makes it easier when you come with a guy that you know and guys that you have played with there’s no doubt about it. It was a big shock to come down here but it didn’t take long for us to feel at home.”

Just ask any of his former teammates what Desjardins meant to the club, and they won't hesitate to tell you just how important he was...on both sides of the puck.

"Eric was everything," said Lindros, who was inducted into the Flyers Hall along with LeClair earlier this season. "He could skate, he could shoot, first pass to him if you needed a goal, he would score goals at clutch times. Meanwhile if you were in need of a goal scorer here and there absolutely.

"He was that quiet force. He was just amazing.”

Just as impressive as his game was how he conducted himself off the ice.

“For me I think it was the respect he had off the ice," LeClair said when asked to identify Desjardins best attribute. "His leadership on the ice was outstanding, but if you look at how he handled himself off the ice, he had the respect of everyone in that locker room at any time.”

Unfortunately for Desjardins -- and the 10-year-old Flyers fan in me -- he was unable to bring a Cup to Philly, but not because of a lack of chances.

"My first year winning the Cup, I thought it was easy," Desjardins said, realizing now that's not the case. "It took me six or seven years after that to make it to the Final (1997 with Flyers). After that I never really had a chance. When you win it and you’re young you enjoy it, but when you have a chance to win it when you’re older I think you probably appreciate it a lot more.”

Aside from the Finals loss to the Red Wings in 1997, the Flyers got close in 2004, but with Desjardins sidelined with an injury they lost to Lightning in the Conference Finals. Could his presence have produced a different outcome?

"We were down to just bodies. So you’re taking Sami Kapanen and putting him in the front and then taking Desjardins and putting him on the back end for thirty minutes," added Primeau.

Nevertheless, Desjardins' had a spectacular career in Philly. In 738 games, he posted 93 goals and 303 assists and was plus-143. His 396 points are second in Flyers history, behind only Mark Howe. Desjardins, a two-time all star as a Flyer, was the 12th captain in team history, taking over the role in March of 2000 and won the Barry Ashbee Trophy seven times.

“I played for the Flyers for 11 years and I experienced so many great things here," he said Thursday night when asked why he decided to come back and retire as a Flyer. "There were so many good years. We had a chance to go in the playoffs every year. I had my kids here, so I think for me I wanted to keep playing, but in the league as a Flyer. I didn’t want to go anywhere else."

I'll remember those 11 years -- and the guy they call "Rico Suave" -- fondly. I'll remember arguing with my cousin over who got to pretend they were Desjardins, when no one ever wanted to be the defenseman. I'll remember yelling at him to stop passing the puck on the power play and to just shoot, only to have him set someone up for a score just seconds later. Most of all, I'll remember being a kid that was falling in love with a team.

But I shouldn't be telling you that. I'm a journalist. No feelings allowed. So I'll let Desjardins sum it up for you:

"The saddest moment [of my career] was when I retired."