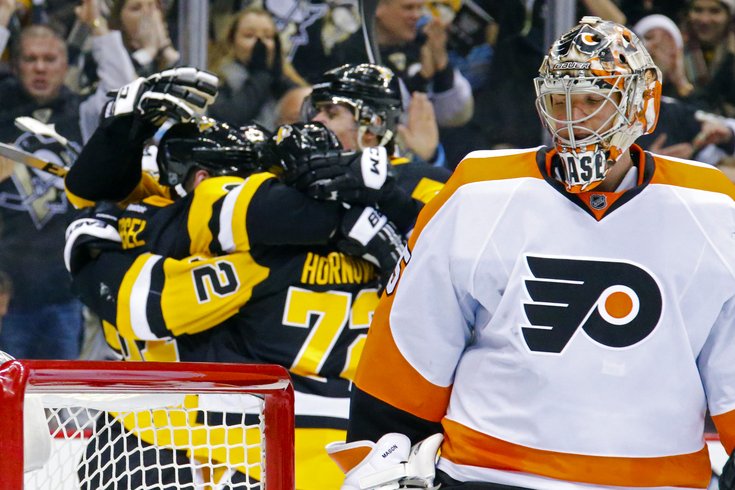 Things always get interesting when the Flyers and Penguins get together, and Thursday night's contest was no different as Pittsburgh overcame an early two-goal deficit to beat Dave Hakstol's team 4-3 at CONSOL Energy Center.

The Flyers (20-17-8) led 2-0 after the first period thanks to goals from Brayden Schenn and Jake Voracek. But that first 20 minutes was about all their fans got to enjoy. The rest of the game was all Penguins.

Sidney Crosby, Trevor Daley and Phil Kessel all scored in the second period to give the Penguins their first lead -- and Kessel added another in the third to give them some breathing room -- and they never looked back. Not only did they control the tempo and scoreboard over the final 40 minutes, but they also hit goalie Steve Mason with a furious barrage of shots and outshot the Flyers 36-21. At one point in the third period, with about five minutes left in the game, the Penguins had recorded 35 shots in 35 minutes stretching back to the start of the second.

The Flyers tried to make a comeback late in the game, as Claude Giroux cut the deficit to 4-3 on the team's third power-play goal of the night (a season-high), but that attempt ultimately fell short. How short? Take a look yourself:

They traded the wrong Schenn. pic.twitter.com/GBa0M2a01R

Here's more of what I saw:

•    Despite the score, Steve Mason didn't play all that poorly. He had a great first period, stopping all nine Pittsburgh shots. The second period, however, was not his best, although it certainly wasn’t his worst. He saw 17 shots in total that period and let three past him. But two of the goals came with his team on the penalty kill and the other ... well, you try to stop this:

But he was able to make saves like this to keep the Flyers in it headed in to the second intermission.

In the third, Mason was again forced to make save after save, and did a really good job of keeping his team in it in the wake of the three-goal second. He stopped 18 of 19 shots in the third -- and 41 of the Penguins' 45 shots overall -- but ultimately it was Kessel's goal six minutes into the period that proved to be the difference.

•    Brayden Schenn got the scoring started midway through the first period on the Flyers' first power play of the game. Simmonds and Gostisbehere assisted on the goal.

•    That wasn’t all the only scoring by the Flyers’ special teams in the first period. They later added another power-play goal, this one off the stick of Jake Voracek, and set up by captain Claude Giroux.

Surprisingly, it was Voracek’s first power play goal of the season and just his sixth of the season. He does, however, have 26 assists and has recorded at least a point in 12 of the Flyers’s last 16 games.

Perhaps the most ridiculous stat of the season: Flyers have multiple first-period goals for the first time in THIRTY-NINE GAMES.

•    Conversely, their penalty kill was not as sharp. They finished the game 2-of-4. Ryan White’s penalty late in the first led to Daley's goal early in the second period, which cut the Flyers’ 2-0 lead in half. Then, after Sidney Crosby tied it, Pittsburgh added another power play goal in later in the second period to take a 3-2 lead.

Clearly, the Flyers were missing Sean Couturier on the penalty kill -- and against Crosby in general. They entered the game 24th in the league at 79.2 percent and just as the unit had started to climb out of the NHL’s cellar — they had killed 21 of their 24 penalties (87.5 percent) so far this month prior to Thursday’s game — Couturier’s lower body injury disrupted their positive momentum.

It also disrupted Couturier's recent streak of success on the offensive end as well. He's notched at least one point in 10 of his last 14 games and has scored a total of 14 points (6 G, 8 A) during that stretch. In his previous 24 games this season, the 23-year-old had recorded just eight points (3 G, 5 A).

•    With Couturier out, the Flyers recalled Sam Gagner from the Lehigh Valley Phantoms. Rich Hofmann wrote more on that Thursday afternoon, and you can read that here.

•    Shayne Gostisbehere, who will soon lead all rookie defensemen in scoring, recorded two assists in the first period Thursday night. And although he missed everything on the shot, he did this:

And on the other end of the ice…

•    And, of course, what would Flyers-Penguins be without a few hits...and some trash talking nuns?

I thought it was a joke at first. Sure enough, there they are. Have a sign and everything (although I’m sitting behind and can’t read it)

Think this is a big rivalry? Tim Saunders just pointed out, I kid you not, two nuns banging the glass behind the penalty box.

Gudas tossed Malkin at the end of the first period:

But Gudas wasn’t done with Malkin. Here they are again, this time in the second, shortly after the Pens took their first lead at 3-2.

And how about a little Brayden Schenn?

The Flyers will travel to Brooklyn to take on the Islanders on Saturday night -- weather permitting. They'll then return home on Monday to host the Bruins. They played both these teams earlier this month in back-to-back games as well, beating New York 4-0 and Boston 3-2 on January 9th and 13th, respectively.