Simmonds' move to top line pays off for Flyers

By Associated Press
Flyers NHL
from 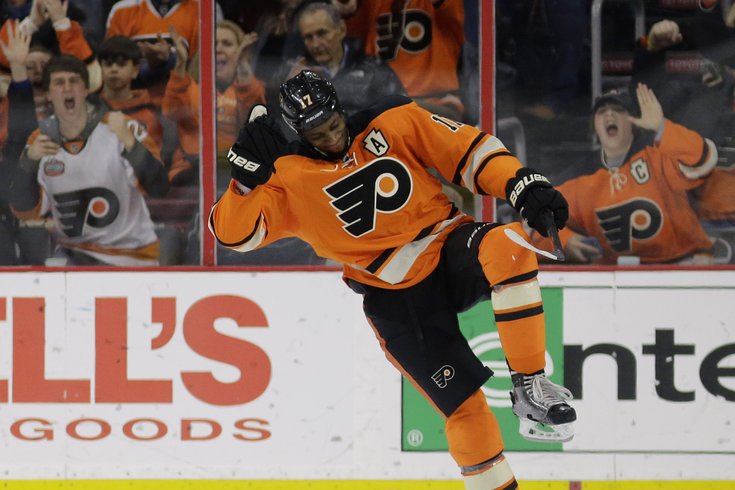 Wayne Simmonds had a goal in regulation and the shootout to lead the Philadelphia Flyers to a 3-2 shootout victory over the Nashville Predators on Saturday.

Ryan White also scored in regulation for Philadelphia, which improved to 3-7 in shootouts this season.

Colin Wilson and Craig Smith scored in regulation for league-leading Nashville, which lost consecutive games for the first time this season.

Jakub Voracek opened the shootout by beating Pekka Rinne with a backhander. After Rob Zepp stopped Matt Cullen, Simmonds beat Rinne through the legs, then Zepp clinched the win by denying Craig Smith.

Nashville dropped to 5-5 in shootouts.

Predators coach Peter Laviolette made his first trip back to Philadelphia since being fired after beginning last season 0-3. Laviolette led Philadelphia to the Stanley Cup finals in 2010 and an Atlantic Division title the following season. He received warm applause from the fans when he was introduced and shown on the video board late in the first period.

Philadelphia took a 2-1 lead with 8:39 remaining in the second period on White's wrist shot from the slot that went through Rinne's legs. Brayden Schenn and R.J. Umberger assisted the goals after their persistent pressure kept the puck in Nashville's zone.

Smith's goal 23 seconds into the third period tied it at 2. Mike Fisher sent a cross-ice pass to a wide-open Smith, who shot it off Zepp's jersey and in.

Both teams had chances for the go-ahead goal in the final period. Zepp stopped James Neal with a good save with 11 ½ minutes left and extended his pad to deny Wilson a minute later.

Rinne used his left pad to stop Matt Read from right in front with 17 minutes left, and then twice turned away Claude Giroux from his doorstep with four minutes to play in the period.

Simmonds extended his career-high streak with a point in his seventh straight game with a nifty deflection of Michael Del Zotto's shot nine minutes in to give the Flyers a 1-0 lead.

But Nashville took advantage of Del Zotto's turnover with just over a minute left, and Wilson converted just the Predators' second shot into a goal to tie it at 1 with 1:02 remaining in the period. Wilson beat Zepp, who was playing in his seventh career game, with a shot from the left circle.

Zepp, a 33-year-old rookie was spelling Ray Emery, who normally backs up Steve Mason. Mason is out with a knee injury.

Philadelphia entered Saturday's game on the heels of two lackluster home performances, Tuesday's loss to Columbus and Thursday's shootout defeat to NHL-worst Buffalo. But the Flyers completely dominated the opening period and continued to apply the pressure. Only a strong save by Rinne on Schenn late in the first period kept it a one-goal game.

Flyers coach Craig Berube broke up his top line in attempt to get the club's offense going, splitting up Claude Giroux and Voracek. The duo, who are among the NHL's points leaders, had been paired together since the 2012-13 season. But their struggles continued, as Giroux went without a point while extending his goalless drought to 10 games. Voracek also didn't have a point.

• Saturday marked the first contest of back-to-back games for both teams, as Philadelphia hosts Washington on Sunday and Nashville travels to Buffalo.

• Predators D Cody Franson and C Mike Santorelli played for the first time since being acquired in a trade with Toronto on Sunday.

• Flyers RW Zac Rinaldo returned to the lineup after missing the last 10 games, eight of which were a suspension for an illegal hit on Pittsburgh's Kris Letang. Rinaldo received a 10-minute misconduct in the second period.