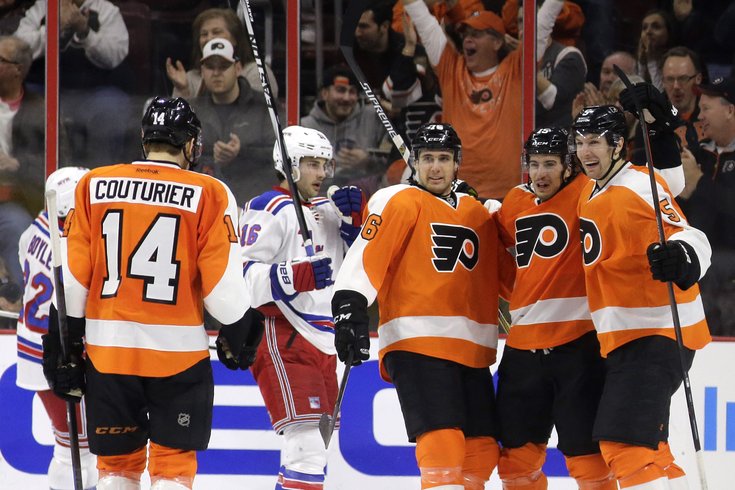 Things didn't get off to a great start for the Flyers on Saturday night against the New York Rangers, but that didn't stop Craig Berube's team from getting 2 crucial points.

Less than 10 seconds into the game, Derek Stepan flicked a shot on net from out near center ice -- it was more of a dump into the zone than a shot really -- and it somehow trickled past goalie Steve Mason and into the back of the net. Just like that, a Flyers team desperately in need of two points would be forced to play from behind.

After a collective groan echoed from the crowd at the Wells Fargo Center -- some fans hadn't even sat down yet -- the officials huddled up and decided a Rangers player was offside, and the goal was waved off.

Already 0-3 vs. the Rangers* this season, an early deficit was not something the team could afford, especially since the Boston Bruins picked up two points earlier on Saturday, moving them to eight points ahead of the Flyers for the final Eastern Conference wildcard spot.

The Flyers would strike first off the stick of Matt Read, but their 1-0 lead was short-lived to say the least:

They didn’t even finish announcing Read’s goals, and the Rangers tie it. This one will count. 1-1 midway through first.

The Rangers would add another* midway through the second, but that would be all for them the rest of the way as Mason came up big time and time again.

*Hard to fault Mason on this one, as it deflected off Braydon Coburn's skate in front as he was clearing the porch.

The Flyers would tie it up a few minutes later as Michael Raffl deflected a Coburn shot to beat Cam Talbot.

Then, just 89 seconds into the third period, Michael Del Zotto -- facing his former team -- scored the game winner with the Flyers a man down. It was just their second shorthanded goal of the season. The other was scored by Sean Couturier, who assisted on Del Zotto's goal.

Wayne Simmonds would add the final score of the night, an empty-netter with less than a second remaining in the game.

Here are a few observations on the game:

After getting off to a rocky start -- luckily it didn't wind up hurting the Flyers because the goal was overturned -- Flyers goaltender Steve Mason was brilliant, stopping 34 of the Rangers' 36 shots, including all 12 in the third period. At one point in the third period, with his team clinging to a 3-2 lead, Mason stopped what seemed like 10 shots in 30 seconds, bringing the crowd to its feet.

It was probably closer to five shots, maybe seven, but it was impressive nonetheless. Take a look for yourself:

If the Flyers have any hopes of still making the playoffs, Mason's going to need to not only stay healthy, but play at this type of level. If he does, the Flyers can beat almost any team in the NHL. They've proven that in recent weeks with wins over the Predators, Capitals and, now, the Rangers.

A tale of two scratches

After being healthy scratches for the past four games, defenseman Luke Schenn and winger Vinny Lecavalier were inserted back into the lineup in favor of Zac Rinaldo and Andrew MacDonald.

Schenn didn't waste much time making an impact on the game, as it was his turnover that lead to the Rangers first goal of the game. One has to wonder if he could be back to being a scratch when the team hosts Calgary on Monday night.

On the other hand, Lecavalier contributed offensively, getting the second assist on Raffl's game-tying goal in the second. However, he missed a chance on a wide open net in the third that would have given the Flyers some breathing room late.

About all those extra defenseman...

Just as it seemed like the Flyers could afford to trade one of their defenseman at the break -- they've had two as healthy scratches each game for a while now -- they lose Nicklas Grossmann to injury.

At first, it looked like Grossman took a shot to the head as he dove to the ice for a block. The replay made it look like he was hit in the shoulder or ribcage.

Perhaps, it was neither of those:

Watched replay of Grossmann injury between periods, seemed as if puck hitting him was coincidental. Injury seemed to happen when he hit ice.

Either way, once Grossmann was able to get back to his, only with the help of his teammates and a trainer, he went immediately back to the locker room. He did not return to the ice, and the Flyers would only say he suffered an upper-body injury.