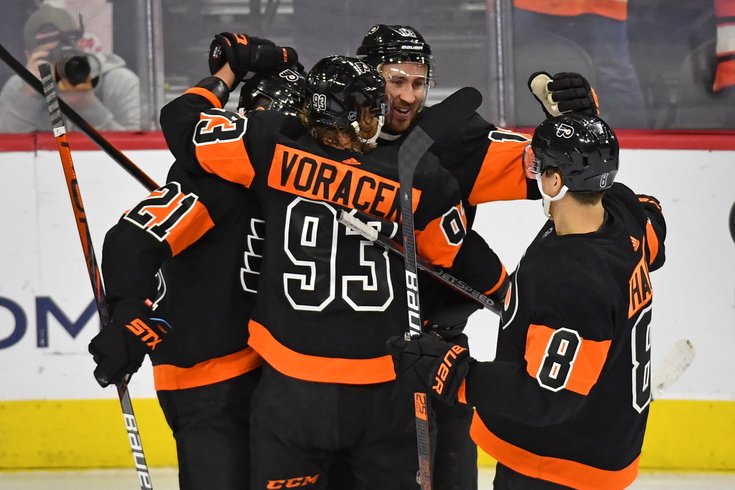 With the way the Flyers have been playing, it's starting to look like they may never lose again. Winners of six straight — and 11 of their last 14 — Philly has not only been able to accumulate points at an impressive pace, but they've also been able to climb their way up the Eastern Conference standings and now sit just three points behind the Capitals for first place in the Metropolitan Division.

Those two teams will meet in the nation's capital on Wednesday night with the Flyers (38-20-7) having a chance to pull within a single point of the division leaders.

In the meantime, we thought it was as good a time as any to check in on the Flyers' latest Stanley Cup odds with just 17 games remaining in the season. But first, let's take a look at the top point earners across the entire NHL, with the Western conference teams in tialics:

With eight of the top 12 teams playing in the East — and five of them playing in the Flyers' own division — you'd think their odds would suffer because of it. Not so fast.

Heading into play Sunday, the Flyers had the fourth best chances at winning the Cup, according to MoneyPuck.com., which uses data and simulations to predict how the season will play out. Following their win over the Rangers, however, the Flyers saw their chances jump from 7.9% all the way to 12.7%, which is good for the best in all of hockey. (At one point on Sunday, it actually reached 13%, but dipped slightly after the late games had finished.)

No, that's not a typo. As of Monday morning, at least according to MoneyPuck.com's computer models, the Flyers are the favorites to win the Cup. Still don't believe me? Take a look at this awesome graphic that shows you how their odds of advancing each round compare to the rest of the NHL:

So, how do those 12 above teams stack up when you go by MoneyPuck's odds? Funny you should ask...

Here's a look at the Top 12 via MoneyPuck, and you'll notice that a few of the teams have fallen out and been replaced. The new teams are in italics, with their position in the overall standings in parentheses.

That's weird. Where did the Penguins go? According to MoneyPuck, they have the 16th best chances to win it all at a whopping 1.5%.

So, what do the oddsmakers think? Well, it appears some of them have been slow to jump on the Flyers bandwagon, as you can currently find the Flyers at +2100 to win the Cup Final on FanDuel, which are the ninth best odds in the NHL. Given that their point total has them in sixth and their current odds from MoneyPuck give them the best chance to win it all, that seems like a bet work making — and I did just that on Sunday night following their win over the Rangers.

Other sports books have the Flyers odds generally hovering between the +1600 and +2000 mark. And with new odds expected to be released on Monday afternoon, now might be the best time to get a bet in on the Flyers. [Note: By late Monday afternoon, FanDuel has updated their odds and have moved the Flyers to +1600.]

The newest odds from BetOnline.ag, which were released on Monday afternoon, have the Flyers at 16/1 to win the Stanley Cup. That's still only good for the ninth best in hockey, but according to BetOnline, the Flyers' odds were 25/1 just over two weeks ago, before their current win streak started.

They're off on Monday and Tuesday but will return to action on Wednesday for that huge game in Washington. Here's a look at how their schedule down the stretch compares to the other playoff contenders:

Can they stay hot down the stretch and make a deep playoff run for the first time in nearly a decade — and, more importantly, win us all a little money? We're about to find out...