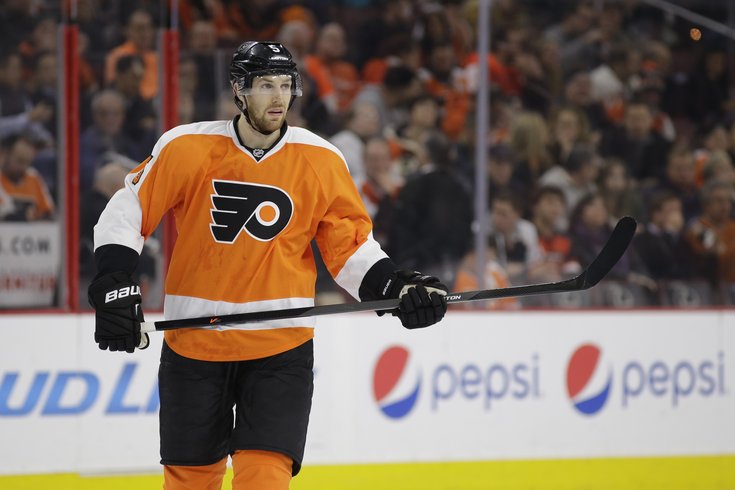 The Flyers have traded defenseman Braydon Coburn to the Lightning

Just a few days after trading Kimmo Timonen to the Blackhawks, the Flyers have dealt another veteran defenseman.

As first reported early Monday morning by Chris Johnston of Sportsnet, the team sent defenseman Braydon Coburn to the Tampa Bay Lightning in exchange for defenseman Radko Gudas (6 feet, 204 pounds), as well as first- and third-round draft picks in 2015.

The team officially announced the deal a few hours later on Monday. They also clarified that the first-round pick they received comes with a stipulation: it can not be the first-overall pick in the draft. Should the Lightning fail to make the playoffs and win the draft lottery, the Flyers would receive the Rangers' first-round pick, which was previously acquired by Tampa, instead.

Coburn has played in just 39 games for the Flyers this season and has tallied nine points (one goal, eight assists), but the 30-year-old Canadian is fourth on the team among non-goalies in average ice time at 20 minutes, 14 seconds per game.

Originally drafted eighth overall by Atlanta (now the Winnipeg Jets) in 2003, Coburn was traded to the Flyers for Alexei Zhitnik on February 24, 2007. In 576 games in orange and black, he has a total of 161 points (37 goals, 124 assists) and a plus-minus rating of plus-24. Over his nine years with the Flyers, Coburn has averaged just under 22 minutes per game of ice time.

In return, the Flyers got Radko Gudas, a 24-year-old Czech defender who was taken in the third round (66th overall) of the 2010 draft. Over the last three seasons, he has played 126 games for the Lightning and has seven goals and 25 assists. In 2014, Gudas appeared in 71 games for Tampa, averaging 19:08 ice time, and scored three goals to go with his 19 assists.

Like Coburn, Gudas has one year remaining on his current contract*, however his $991,667 cap hit is significantly less than the $4.5 million Coburn will make next season.

Friday night, during a conference call following the Timonen trade, general manager Ron Hextall said that move did not preclude him from making other trades, hinting that he might not be done dealing.

The NHL trade deadline is Monday at 3 p.m.