Folks, the flat-earth rocket man finally launched into (near) space

Mad Mike Hughes hurt his back, but soared a third of a mile into the sky in the name of awareness 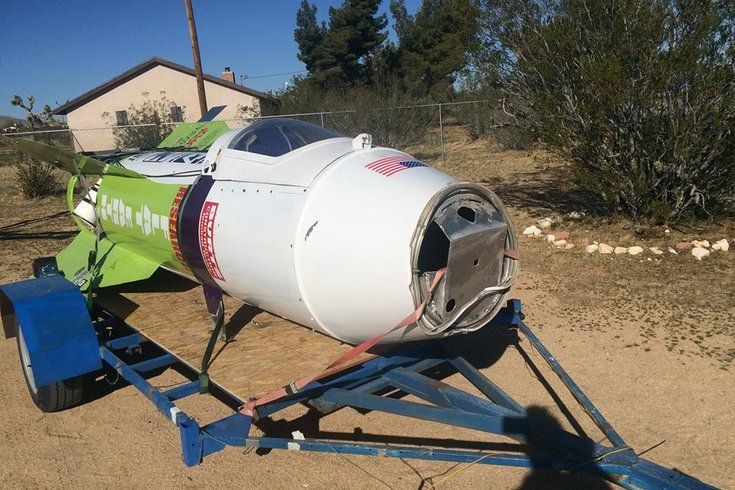 A long-awaited rocket launch in the name of Flat Earth awareness finally happened in late March 2018. The rocket, and pilot Mad Mike Hughes, survived relatively unscathed. He said he's planning a launch from Antarctica next.

It’s been a while since we checked in on the flat-earth movement, most notably, Mad Mike Hughes’ mission to ride a rocket into the air in the name of awareness.

Earlier this year, the limousine-driving daredevil and gubernatorial candidate told PhillyVoice that his February 3 liftoff “should get more viewers than the Super Bowl,” which the Philadelphia Eagles ended up winning, in case you missed it.

Much like his initial plan in November 2017 to get “strapped into the rocket with 6,000 pounds of thrust, going up three-eighths of a mile,” that Super Bowl Weekend launch was delayed as well. (Bureaucratic red tape and an unspecified malfunction arose in each respective case.)

Well, guess what folks: Mad Mike, 61, finally launched that flat-earth rocket into (near) space in late March (though it would have just missed reaching the top of tippy-top of the Freedom Tower in New York City). Most importantly, he survived the mission in Amboy, California.

It was quite the unique event, what with one video from the scene featuring a pair of commentators drinking Bud Light and (straight from a bottle of) Evan Williams Bourbon.

After returning to Earth from his third-of-a-mile voyage into the skies via parachute, Hughes told reporters at the scene that he was both “relieved” and “tired of people saying I chickened out and didn’t build a rocket.” 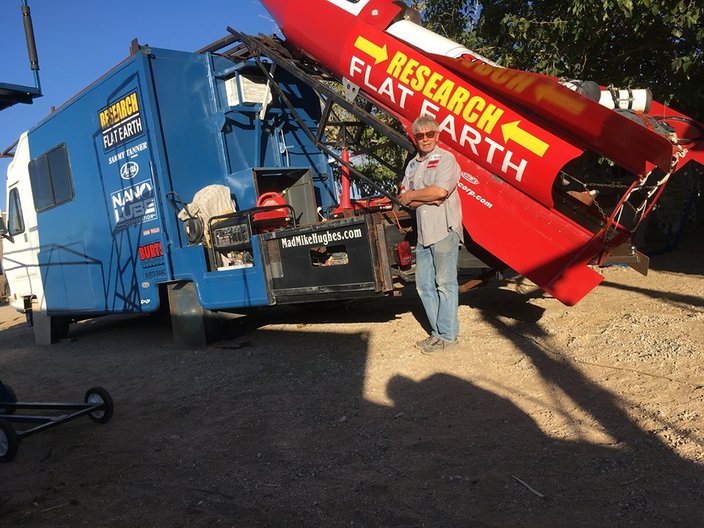 His back also hurt a little bit, said Hughes, who was checked out by medics at the scene. He later realized that he’d busted his L2 vertebrae.

In any event, many videos of this momentous occasion – inspired by a flat-earth awareness push that started with a billboard in Philadelphia – made its way from the launch area to YouTube.

A couple of them are embedded below. The last one is a bit profane, so earphones are necessary in some situations. (The cuss words prompted Mad Mike to say he cut ties with NoizeTV, for what it’s worth).

"Mad Mike Hughes" was injured in a crash of a homemade rocket during a mission to prove the Earth is flat. https://t.co/Z0Vq7LwjOV pic.twitter.com/Q3hljs47lF

Through subsequent Facebook updates, Hughes has announced that the damaged rocket has made it back to his home, that he’s about to start a GoFundMe for a follow-up “space launch” and that he’s selling mementos like rocket panels, sections of the parachute and the T-shirt that he wore during the launch.

Not everybody in this realm of the world was excited about the news, though.

"They accomplished their goal to make flat-earthers looks crazy. It was a masonic s*** show and NASA was involved," said YouTuber Flat Earth Reset, who has written off much of the Infinite Plane Society as con men. "The deal was that there was supposed to be a camera in the cockpit facing Mike, but all we get is heavily edited video.

"After lots of lies and over six months and over a dozen cancellations, most flat-earthers did not care about it as they lost interest long ago. The majority of flat earthers never supported Mike and IPS."

At primary issue: Flat Earth Reset's claim that NASA was involved in the launch, as he considers the agency to be "the root of all evil." He shared a video that he made after the launch as well.

Attempts to reach Mad Mike for response were unsuccessful on Friday, but should he get in touch, this story will be updated.

In unrelated news, recent polling data showed that nearly one-third of millennials question whether the world is actually round. So, the future has that going for it.