For family doctor, family hobby is icing on the cake 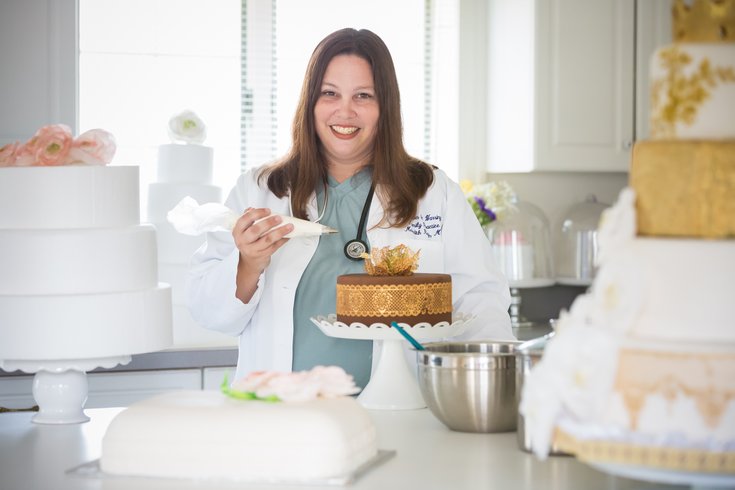 Dr. Meredith Ray, a family physician at Doylestown Hospital, spends much of her time as an amateur cake decorator, working out of the in-law suite of her Jamison, Bucks County, farmhouse. She also teaches the art. “You learn more from teaching others. This holds true in both medicine and in cake decorating,” she says.

Meredith Ray, M.D., a family physician on staff at Doylestown Hospital in Bucks County, started taking cake decorating classes during her second year of medical school in 1998 as a way to de-stress from her studies.

Little did she know that 19 years later, decorating cakes, cupcakes and cookies would become a passion.

“For me, it is about making people happy. I love to make cakes for family members and friends. It is a way to make someone feel good, but also a chance to express creativity and have fun,” she says.

At first Ray, now 42, went to a local cake decorating supply store to learn the basics – like creating classic buttercream roses and perfecting her piping skills. And then after her medical residency, she took night and weekend classes in sugarwork and gumpaste flowermaking.

Now a weekend warrior of cake decorating, she has taken sugar flower classes at the Culinary Institute of America and participated in “Days of Sharing” through the Pennsylvania Chapter of the International Cake Exploration Society.

“I work weekends so it is hard to commit, but I take as many classes as I can,” she said. “You get to learn from amazing people like Colette Peters who is famous for her ‘topsy-turvy’ and sculpted cakes and for her appearance on the Food Network.”

Soon Ray was bitten by the competition bug. At Peddler’s Village in Lahaska, Bucks County, she won a few cash prizes in cupcake and gingerbread contests, including a third prize this past winter for her gingerbread clock.

“You don’t always know what the judges are looking for, but it is a good way to meet new people and do something you love,” she says.

She has taken so many classes that Ray finds herself competing at higher levels against people who own bakeries – even though she's not a culinary student. It is a real challenge, she says.

A few years ago, Ray decided to up her game even more by becoming a certified Wilton Method instructor. She has taught a few people, including her daughter Madison, who is now 10 years old.

Dr. Meredith Ray originally made this cake to celebrate the 100th birthday of her grandmother Beatrice, (or 'Queen Bee'). It has been re-created and will be entered into an upcoming Pennsylvania state cake competition.

“You learn more from teaching others. This holds true in both medicine and in cake decorating,” she says.

Cake decorating has become a family affair, with Madison going to meetings and taking her own creations to competitions with her mother.

At her home in Jamison, Ray has an in-law kitchen that acts as her studio. There, she and Madison spend hours working on their craft.

“I am always trying to hone my skills. One new technique I am working on is airbrushing,” she says.

“Airbrush cake work seems daunting at first, but it is not unlike treating a skin lesion with liquid nitrogen, you need a steady hand and a light touch. I bought an airbrush for my cake kitchen a few years ago, but I was too afraid to take it out of the box.

She finally decided to try it out after a little encouragement at a “Day of Sharing” from Sheila Miller, a certified master sugar artist and cake decorator in York, Pennsylvania.

When it comes to her creative process, Ray says it is very personalized. She always asks herself: What tools do I have? What will have the biggest impact? And, how can I do it? 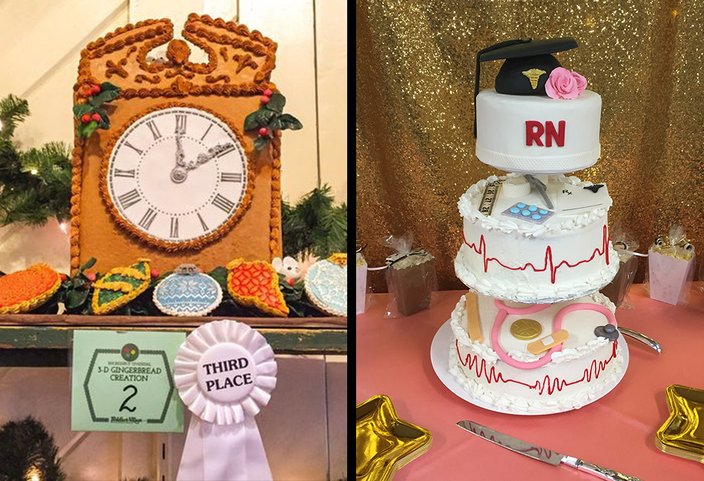 Two of Dr. Meredith Ray's sweet creations: a gingerbread clock, left, that won the third-place prize in the Peddlers Village 3-D category, and an RN cake decorated for a nursing school graduate.

She typically starts out sketching the concept on paper, drawing inspiration from magazines and shows she has watched as well as the different competitions and classes she has attended.

One of her favorite things to do is shop for new tools and ingredients. One recent purchase was Cake Lace, an edible lace imported from the United Kingdom that she used to make a cake for her grandmother’s 100th birthday.

“It is an edible, patented, gelatin like material that you spread onto intricately detailed silicone mats. When it dries, it can be peeled off of the mat and applied to your cakes,” she explains.

She used the same lace on her gingerbread “Ice Castle,” which was covered with hundreds of delicate snowflakes made from wafer paper and cake lace.

Interestingly enough, her least favorite part of the process is actually the baking. She is more interested in the overall aesthetics of her creations and not how they taste. That is why when she competes, she stays away from taste contests.

“I add or subtract from box recipes and would actually be happy to have someone else do the baking for me.

"I don’t even like to eat cake anymore,” she says with a laugh.