Kyle Giersdorf, 16, was livestreaming on Twitch when when armed police showed up at his Montgomery County residence 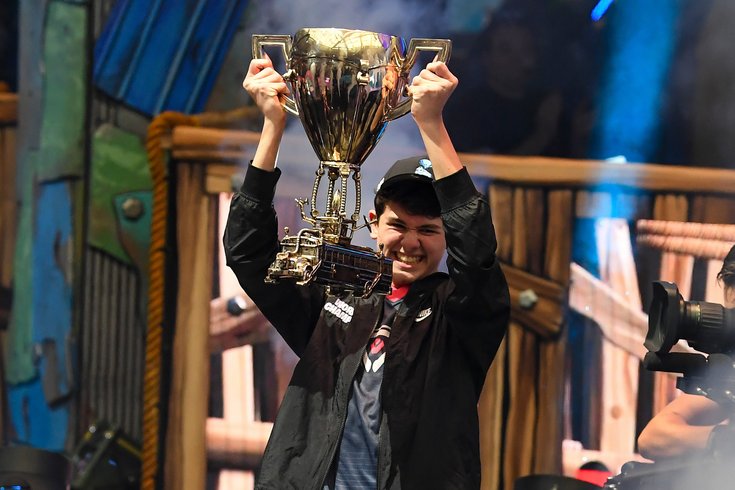 Kyle "Bugha" Giersdorf, 16, of Pottsgrove, was swatted at his home in Pottsgrove, Montgomery County, on Saturday. He's seen here celebrating after his win as the first solo World Champion at the Fortnite World Cup Finals e-sports event at Arthur Ashe Stadium.

Kyle Giersdorf, the first Fortnite World Cup champion, was the apparent victim of a "swatting" prank on Saturday at his Pottsgrove home.

Giersdorf, also known by his player name "Bugha," was livestreaming his  Fortnite game with two other players on Twitch when armed police officers showed up at the teen's Montgomery County residence.

Giersdorf walked away from the livestream mid-game, only to return and confirm that he had been the target of the dangerous prank that involves calling police to report a fake emergency in an effort to send armed cops – often members of the SWAT team – to a person's home.

Cpl. Albert Werner of Upper Pottsgrove Township Police Department told USA Today that the caller had identified himself as Giersdorf and informed police "that he shot his father multiple times with an AK-47 and had his mother tied up and bound in the garage."

Half-way through the game, Giersdorf stopped playing, which led the other players to wonder what happened to him. When he returned, he told the two other players that he had been swatted. He said, "They came in with guns, bro. They literally pulled up. Holy s—t, that's scary."

The call appeared to be placed from outside the country, possibly overseas, Werner said. People who do swatting pranks typically use a device to disguise their real locations, as well as their voices.

Swatting pranks have become deadly in the past. Andrew Fitch, 28, was killed outside of his home in Wichita, Kansas, in 2017. After getting into an argument with a player on "Call of Duty," a man reported to police a fake hostage situation and reportedly gave the wrong address. Tyler Barris, 26, was sentenced to 20 years in prison after pleading guilty.