Free Uber rides Thanksgiving eve in Manayunk, if you know where to look

By Hayden Mitman and Sharon Lurye 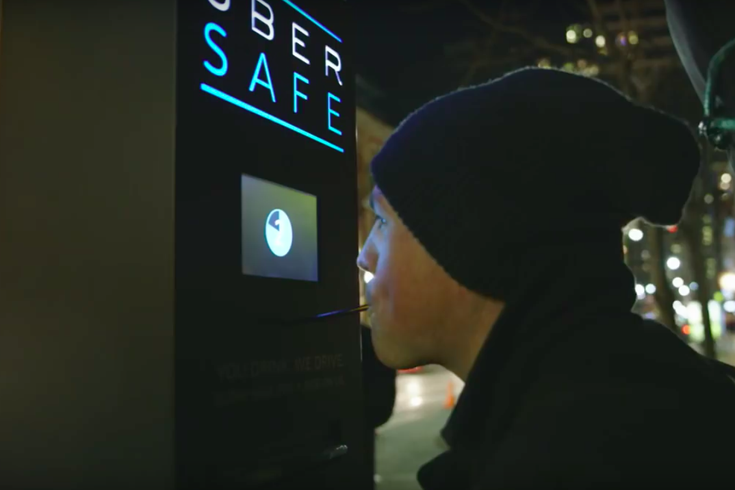 This screen capture show a breathalyzer kiosk that will automatically hail a Uber driver for those too drunk to drive home. A similar kiosk will be placed in Manayunk on Wednesday evening for those out on Thanksgiving eve.

The Wednesday before Thanksgiving is unofficially known as Thanksgiving eve, and it is even better known as the biggest drinking night of the year.

And, this year, if you find you have imbibed a few too many drinks while out in Manayunk on Wednesday night, you could get a free ride home from Uber.

If you know where to look.

On Wednesday night, the rideshare company is setting up a breathalyzer kiosk in Manayunk. Party-goers simply need to take a straw, insert it into the kiosk, and blow into it for a few seconds to see their blood alcohol level.

After that, Uber will provide a ride home, regardless of whether that person drank a lot or not. The ride is covered up to a limit of $20.

"While studies suggest a direct correlation between the introduction of ridesharing in Philadelphia and a decrease in DUIs, we wanted to take a more hands-on approach to ensure safety," said Jon Feldman, general manager of Uber Philadelphia.

Feldman is referring to a post from blogger Nate Good which showed the average number of DUI arrests in Philadelphia fell after ridesharing services entered the city. However, it is possible that the drop is coincidental.

A more statistically rigorous study from Temple University showed that drunk driving deaths fell in California cities after UberX was introduced. As PlanPhilly reported, though, the reduction in deaths disappeared when surge prices were in effect.

An Uber spokesperson said that only Philadelphia will get to use this kiosk program on Wednesday, but it has proven to be successful in other cites in the past – like Miami, Austin, Toronto, Montreal and Cincinnati.

"This is just a creative and unique way to do it," Uber spokesman Taylor Bennett said.

Though the UberSMART kiosk will be in Manayunk, just where it will be, will remain a mystery.

"We want it to be organic," Bennett said. "We want to let people find it."

He would say the UberSMART kiosk will be in a "highly trafficked area" and will be available from 8 p.m. to 2 a.m. on Wednesday night only.