Scores of free Wi-Fi kiosks to be installed throughout Philadelphia 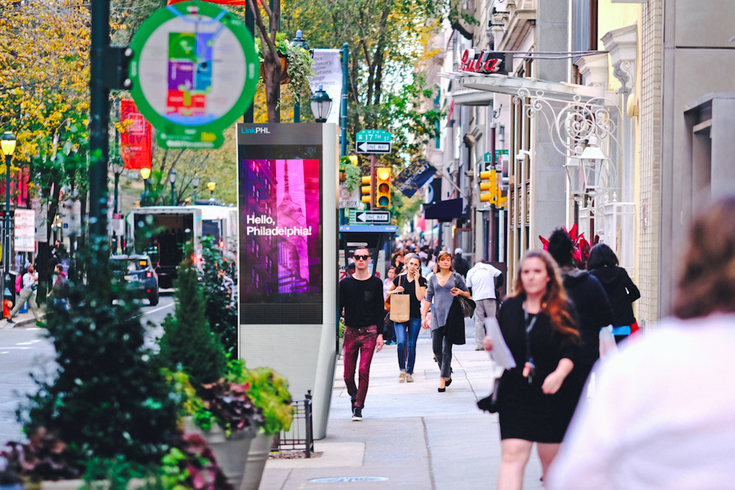 This rendering shows one of the LinkPHL kiosks that will be installed throughout Philadelphia. The kiosks will provide free Wi-Fi access and other services to residents and visitors.

One hundred high-speed Wi-Fi kiosks are being installed throughout Philadelphia, providing residents and visitors with free high-speed Internet access and other public services.

The LinkPHL kiosks, which will be scattered throughout Center City, University City and other city locations, will include two integrated USB Quickcharge ports.

The Art Commission approved a request by the Office of Transportation and Infrastructure Systems to install the devices. Deployment will begin in 2018 and take about 12 months to complete.

"LinkPHL will be an investment in Philadelphia's future, creating 21st century infrastructure in the heart of the city," Mayor Jim Kenney said in a statement. "But more importantly, the kiosks will provide the sorts of modern services that our residents and visitors need as they work and play in the city – at no cost to taxpayers."

The kiosks will provide Wi-Fi with bandwidth for speeds up to 1,000 Mbps – about 100 times faster than the average public Wi-Fi and LTE on mobile devices, according to the city.

In addition to wireless service, the kiosks will enable people to make free phone calls to anywhere within the United States, including direct 911 calls. The kiosks also will be equipped with a touchscreen tablet so residents can access various city services.

Intersection, a smart cities technology and media company, is providing LinkPHL as part of an existing agreement with the city. That contract, approved by City Council in December 2014, called for the firm to install kiosks that display arts, cultural and public information.

Intersection has already installed 1,300 kiosks in New York City, where more than 2.7 million people have registered to use free Wi-Fi since 2016.

LinkPHL is expected to generate millions of dollars in advertising revenue for the city, an essential component toward making its service free to residents and visitors. The contract calls for a minimum annual payment of $450,000 once the kiosks are installed.