There will be haunted mazes, fireworks and more to celebrate Halloween 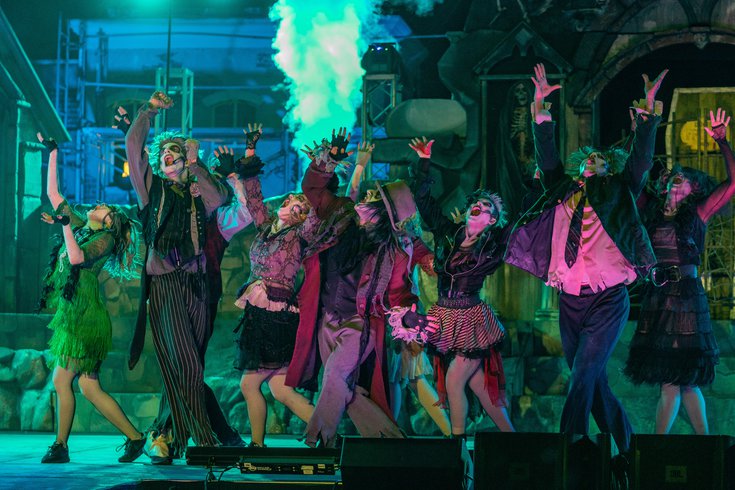 Fright Fest is coming back to Six Flags Great Adventure in September and will feature live performances, like 'Dead Man's Party.'

Fright Fest returns to Six Flags Great Adventure in New Jersey this September after a year-long hiatus. There will be trick-or-treating and events for kids by day and scare zones and haunted mazes by night.

From Sept. 10 to Oct. 31, the park will be decked out with seasonal decorations and feature 10 live seasonal shows and nine haunted mazes scattered throughout the park.

Last year, the park replaced its annual Fright Fest with a more scaled back event, Hallowfest, due to safety concerns from the COVID-19 pandemic.

During the day, kids can dress up in their Halloween costumes and take part in "scary-oke," or attend storytellings from friendly witches.

After 6 p.m., the park is transformed into Fright Fest, which organizers warn might not be suitable for kids ages 12 and under.

There will be demented clowns and mutants roaming Main Street in the park and interactive stage shows, like "Dead Man's Party: Grave Stories" that features a song-and-dance bash.

Scare zones around the park will be packed with zombies, scarecrows, clowns, ghouls and spirits.

There also will be haunted mazes scattered around the park, including "Reflections of the Dead," which features a labyrinth of mirrors that guests must escape, and the haunted forest called "Wicked Woods," where evil creatures lurk.

Guests must make reservations to attend Fright Fest, Six Flags said. Those who show up day-of can make a reservation on the spot, but there's a chance tickets could sell out. Making a reservation in advance is encouraged.

There are new offerings like Fright Fest Power Hours, which take place on Thursdays in September and Wednesdays and Thursdays in October, that block off exclusive ride times on the park's coasters and thrill rides in the dark, and offer reduced prices for the indoor and outdoor haunted mazes.

There also will be nine nights of fireworks at the park, dubbed "Frightworks," set to a musical soundtrack. They will run weekends in September.

This year guests can snack on the Funnel Scream Cake topped with Snickers or the new Frightening Fanta Fizz drink made with Orange Fanta, candy corn syrup, whipped cream and sprinkles.

There also will be augmented reality experiences at the park through QR codes placed around the park and on Six Flags drink bottles that feature four hidden scares.

The park is also hiring for ghouls and zombies to haunt the park. Those interested can apply online and attend an audition, or text "SCARE" to 220-MONSTER. There will be a hiring event Friday from 5-8 p.m. in the Employment Center with acting exercises and on-the-spot hiring.