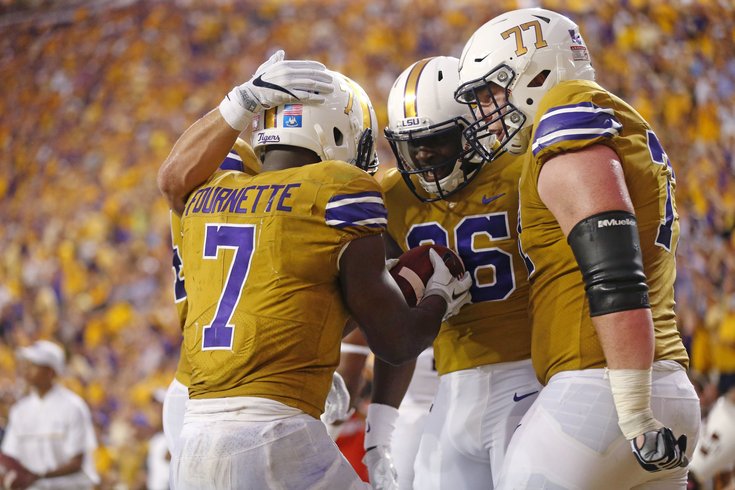 No, not Leonard Fournette. The guy to his right.

After each practice at the Senior Bowl, players are available on the field to speak both with NFL scouts and media. Teams will speak with hundreds of prospects throughout the draft process, at the Senior Bowl, the NFL Combine, at pro days, individual workouts, and visits to team complexes.

In other words, don't make too much of the following list of players, although it's noteworthy that there isn't a randomness to it. Scouts seek out specific players after practice and zero in on them.

To note, there is no new info here that we haven't already reported. It's strictly a copy/paste job from three pre-existing articles that we're putting in one convenient post.

Dayes is a mid- to late-round prospect who fits what Doug Pederson prefers in running backs. Over the last three seasons, Dayes has 88 receptions for 760 yards and 5 TDs, and is also thought of as a quality blocker in pass protection. His career numbers as a rusher:

A 5.2 yards per rush average in college isn't exactly awe-inspiring, but Dayes is a do-everything guy that NC State moved all over the formation.

Pocic is arguably the top center prospect in this draft with the versatility to also play guard. At 6'6, 309, he is much bigger than Jason Kelce, doing a better job anchoring against bigger defenders, but is not nearly as athletic. He's kind of like a Bizarro Kelce in that respect.

Here's Pocic's game last year against Florida. Watch how many Gators end up on the ground when Pocic blocks them.

Last week we reported that the Eagles are considering moving on from Kelce. While Isaac Seumalo may be the center of the future, it certainly wouldn't hurt having a pair of starters in Seumalo and Pocic who can play all three spots along the interior of the offensive line, if need be. Or, the Eagles could draft a center and opt to just leave Seumalo at left guard.

Banner is one of the biggest human beings on the planet, and he is athletic for his size (emphasis on "for his size"). As you might expect of a 361-pound tackle, Banner moves defenders off the ball against their will in the run game but can struggle with speedier edge rushers, although he's a wide man to try to run around.

In the pros, Banner's best fit is probably at RT, which could interest the Eagles depending on what they think of Halapoulivaati Vaitai as a future starter.

On the downside (and this is a significant red flag), Banner allowed three sacks in 2016 and was flagged for a whopping 12 penalties.

In 2016, Phillips had 56 tackles, 9 sacks, 20 tackles for loss, and 1 forced fumble. Where he would fit with the Eagles is unclear. He could potentially be a situational pass rusher early in his career, with the idea of trying to add bulk to his thin frame, or the Eagles could view him as a SAM linebacker in their 4-3.

With two legal cases still to be litigated, Eagles linebacker Nigel Bradham could eventually face discipline from the league. Bradham will also be in the final year of his contract in 2017. While Bradham had a good season in 2016, if the team believes that he is likely to miss time in 2017, they could save $3,000,000 under their cap. The addition of Phillips or another linebacker could be a cheaper option.

Davis is a bulkier DE who may interest the Eagles as a rotational defensive end. Prior to the 2016 season, NFL.com's Lance Zierlein named Davis among 10 college football edge rushers who were "generating interest from NFL scouts and/or are expected to post big seasons for their teams." Here's what Zierlein had to say at the time:

Don't look now, but FCS schools are cranking out NFL draft picks. Davis figures to be yet another after the 2016 season concludes. Turn on the tape and you'll see the first-team All-SoCon defensive end giving Florida State's heralded tackle, Roderick Johnson, all he could handle with powerful inside charges and trips around the edge as a rusher in a November game last year. Davis plays with solid strength at the point of attack and a hunger that drives him through the whistle. He might not be a high-end athlete by NFL standards, but he's a productive, driven player.

In 2015, Davis had 13.5 sacks and 17 tackles for loss. In 2016, his production dipped a bit, but was still good, when he had 10.5 sacks. At the Senior Bowl, Davis will have the chance to impress against better competition.

Yes, that's spelled correctly. Kpassagnon is a physical freak of nature at 6'7, 280, with 10 7/8" hands and 34 7/8" arms. At Nova last season, he had 33 tackles, 11 sacks, and 16 tackles for loss. On his first day at the Senior Bowl, Kpassagnon drew a few oohs and ahhs from the crowd when he tossed highly rated guard prospect Forrest Lamp to the ground.

Kpassagnon is thought of as a raw prospect with a high ceiling. We'll take a deeper look at him soon.

Smoot is a less heralded player in this year's draft class because his team stunk, but he is an explosive, penetrating defensive end whose skill set would fit in well in Schwartz's defense.

Schwartz likes defensive linemen who can consistently find their way into opposing backfield and make tackles for loss, putting the offense far behind the sticks. Because Illinois was often getting blown out, Smoot didn't get as many opportunities to pin his ears back and get after the quarterback, but he has the ability to do it.

Over the last two seasons, Willis has 21 sacks, 32.5 tackles for loss, and 7 forced fumbles. Is that good? Willis is an intriguing Day 2 pass rush prospect.

Glasgow isn't flashy, but he was a solid run defender on a Michigan defense that allowed just 3.1 yards per carry in 2016. On the season, Glasgow had 43 tackles, 4 sacks, and 1 forced fumble.

With Bennie Logan slated to become a free agent this upcoming offseason, combined with the fact that two of the Eagles' division rivals – the Cowboys and Redskins – have dominant run blocking offensive lines, adding a run stuffing defensive tackle could make sense for the Eagles.

Tomlinson reminds me a little of Bennie Logan, in that Tomlinson is a lesser known player who does a lot of the dirty work along the Crimson Tide's defensive line, but doesn't put up big glamor stats like many of his teammates. Logan played a similar role coming out of college at LSU.

In 2015, Tomlinson was stuck behind A'Shawn Robinson (drafted 46th overall in the 2016 NFL Draft) and Jarran Reed (49th overall). However, in limited opportunities, he made a lot of tackles and got his hands on a lot of passes. He had 34 tackles and six (!) batted passes.

In high school, Tomlinson was the Georgia state wrestling champion three times, pinning this poor bastard in nine seconds in the finals his senior year:

Here's Tomlinson against Wisconsin last season. As you'll see, he anchors very well against the run, as you might expect from his wrestling background. He also does a good job of pushing the pocket, although he doesn't have much in the way of a pass rush arsenal. You'll also see his motor, as he chases plays downfield from his defensive line spot. And then obviously, you'll see his ability to bat passes at the line of scrimmage:

Tomlinson was offered a scholarship to Harvard for his academics, and to Alabama for his athleticism. How many people can say that? Ironically, the former may actually hurt Tomlinson's draft stock, as teams may worry that he's "too smart." Also of concern will be that Tomlinson has torn an ACL in both knees, although he latest tear was in 2013.