Suspect arrested, charged with forgery and theft by deception 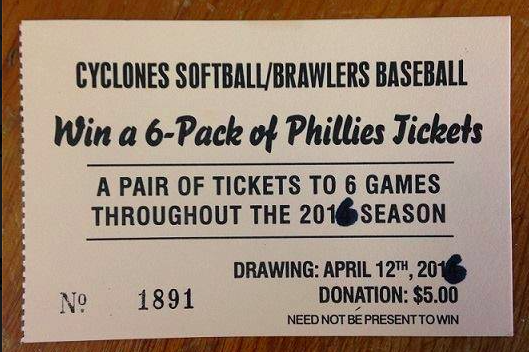 Fake raffle tickets were sold by Todd Zane, 36, who claimed to be donating proceeds to "Cyclones Softball/Brawlers Baseball."

Officials with the Gloucester City Police Department issued a warning to the public Thursday one day after arresting a man they say sold fraudulent raffle tickets claiming to offer a six-pack of Phillies tickets.

In a statement posted on Facebook, authorities announced the arrest of 36-year-old Todd E. Zane, of the 700 block of Division Street, on charges of forgery and theft by deception.

The raffle tickets purport to offer an opportunity to win a pair of tickets to six Phillies games throughout the 2016 season after a drawing scheduled for April 12, 2016. Both dates on the tickets show clearly that the six in 2016 was written over the year originally printed. Proceeds from tickets -- which sold for $5 each -- were supposedly being donated to "Cyclones Softball/Brawlers Baseball."

The tickets were first reported to police on October 16, which led to Zane's arrest on Wednesday. He was arrested in March after police say he assaulted and robbed a couple who gave him a ride home and was charged with drug possession and distribution of prescription medication in November 2014, according to NJ.com.

Anyone who purchased raffle tickets is asked to bring them the Gloucester City police station 313 Monmouth Street so that authorities can identify all of the victims.