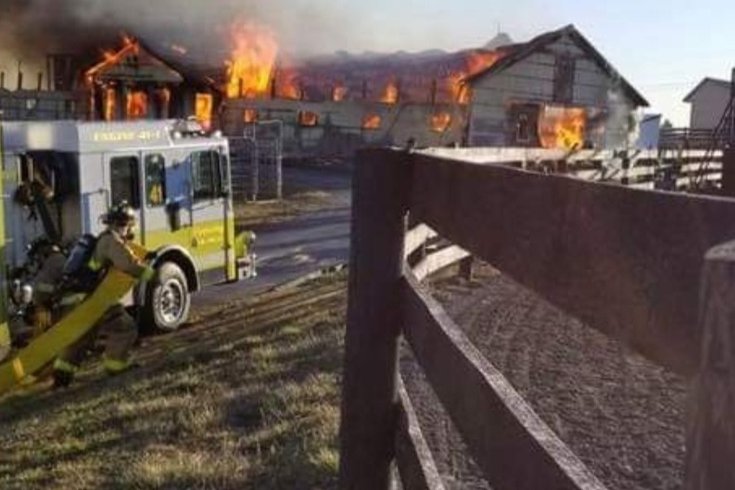 A GoFundMe campaign has raised more than $75,000 to benefit Crane Thoroughbreds in Lebanon County, Pennsylvania, which lost 15 horses in a barn fire.

The friends of a Lebanon County horse training facility that lost 15 thoroughbreds in a barn fire have launched a GoFundMe campaign to help the owner recover from the disaster.

The barn, part of Crane Thoroughbreds in Bethel, caught fire around 4:45 p.m. on Saturday. Owner Clovis Crane and his staff were able to rescue some of the horses from the flames, but the others were trapped and killed by the blaze, the Associated Press reported.

A GoFundMe campaign, launched Sunday by Carrie Brogden and "friends of Clovis Crane," has raised more than $75,000 to help Crane Thoroughbreds cover the costs of the fire. The campaign has a $100,000 goal.

The barn was essentially leveled during the fire. But Crane Thoroughbreds also must dispose of the deceased horses – and handle the emotional burden that comes with that task. Community support for facility has been strong, with more than 200 people showing up Sunday to lend a hand.

Crane Thoroughbreds buys young horses and trains them to become race horses and then sells them. They may receive additional aid from Pennsylvania's Race Horse Development Fund, Crane told the Lebanon Daily News.

However, the Race Horse Development Fund, which is used to support Pennsylvania's horse racing industry, may have much of its funds diverted to college tuition aid under a new move proposed by Gov. Tom Wolf.

No human injuries were reported from the fire and its cause remains under investigation.