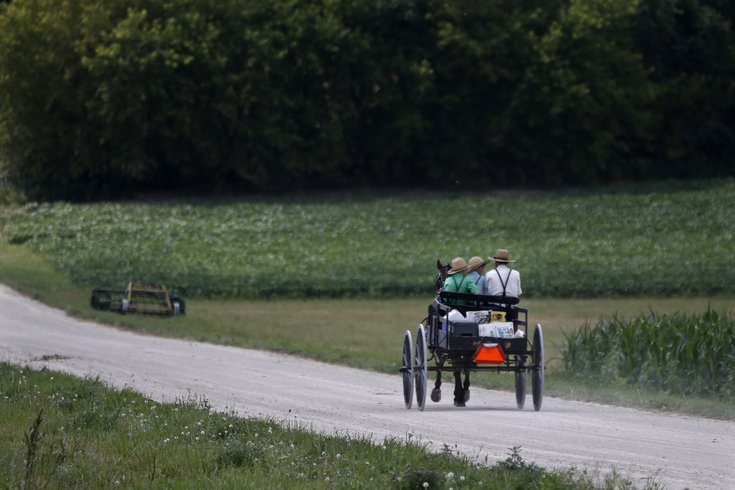 A logging truck crashed into an Amish buggy traveling on State Route 208, Clintonville Rd. in Venango County on Sunday, killing a mother and son who were riding in the vehicle with three other family members. The image above is a file photo of a Amish buggy.

A logging truck crashed into an Amish buggy Sunday in Venango County, killing a mother and son who were riding in the horse-drawn vehicle.

The crash took place around 3 p.m. on Sunday when the cars collided on the 2400 block of Clintonville Rd. (State Route 208) in Irwin Township, reported WBKN27.

Mary Troyer, 31, and her son James Troyer, 10, were killed in the crash. Troyer's husband Mahlon, 32, was driving the buggy with his family of five. The driver of the logging truck, Richard R. Stanford, 54, of Punxsutawney, didn't see the small, horse-drawn car in front of him, and drove into it, authorities said.

Pennsylvania State Police pronounced the mother and son dead on their arrival at the scene. Mahlon, his daughter and another son were transported to hospitals. The surviving son was released from the hospital, but the conditions of Mahlon and his daughter are not yet known.

The road was closed for a several hours the day of the crash. Police said that the driver of the logging truck cooperated with the investigation, and his vehicle was secured by police.

Amish buggies are driven by members of the community due to the religion's strict rules against car ownership and the use of other common modern amenities. The Amish believe that cars can disconnect families and tear apart family life. Instead of owning cars, the Amish use horse-drawn wagons or buggies that they use for local transportation. The buggies usually travel between 5 and 8 mph.

A logging truck, also known as a timber lorry, is a large truck, usually with a flatbed, used to carry logs.