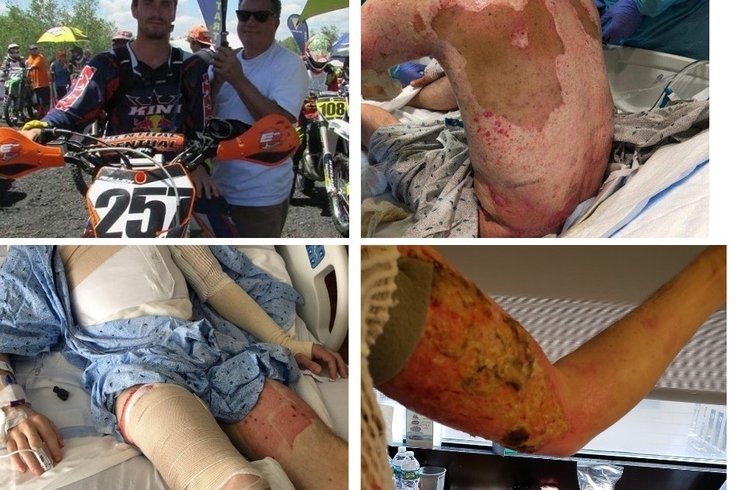 Raymond Mullen, 27, of Brigantine, suffered severe burns after two men allegedly lit him on fire as he slept on a sofa at a home in Hamilton Township.

A Brigantine man who was severely burned when his supposed friends lit him on fire in March is receiving financial support from a GoFundMe campaign to help cover his medical costs.

Raymond Mullen, 27, fell asleep on a sofa at the home of an acquaintance on March 16 and awoke to find that he had been set ablaze.

Authorities described the incident as "a prank that went terribly, terribly wrong," and now Mullen remains bed-ridden in severe pain.

Prosecutors filed charges against Brandon Perez, 23, of Hammonton, and David Sult, 24, of Mays Landing. Both men allegedly doused Mullen with charcoal lighter fluid and set him on fire.

The GoFundMe page set up by Mullen's friends provides an update on Mullen's condition and details the victim's horrifying experience:

When Raymond awoke, he was engulfed in flames while others watched and did nothing. He ran to the nearest door to flee his accusers. Outside, another offender laughed, “I’ll show you how it’s done, Dave” and drenched his back a second time with more lighter fluid. No way could Raymond defend himself and no one came to his rescue!

Mullen dropped to the ground and rolled around until the flames were extinguished. When he tried to drive away from the home, one of the defendants allegedly withheld his car keys and taunted him, according to the account.

Through shock and agonizing pain, Mullen eventually managed to drive 40 minutes to his mother's house. She took him to a local hospital and he was transferred to a Philadelphia hospital with third degree burns covering 30 percent of his body.

The consequences of Mullen's injuries are dire. He's lost 30 pounds, his blood pressure has skyrocketed and his body has lost the ability to perspire or cool on its own. He has permanent nerve damage and will be disfigured for the remainder of his life. To care for Mullin, his mother has taken a leave of absence from her job.

"Raymond (was) once a vibrant, virile young man, worked as an apprentice for a HVAC company. He possesses strong mechanical skills, loves to work on cars or anything that can be taken apart and put together," the GoFundMe account says. "He has a deep passion for the sport of motorcycle racing and was ranked as one of the top 'A' class motorcycle racers on the east coast."

The GoFundMe account for Mullen is seeking $25,000 to cover his medical expenses.

Perez and Suit are each charged with aggravated assault, aggravated arson and conspiracy. They are being held at the Atlantic County Justice Facility.