Pennsylvania will continue its long impasse; emergency funding will be made available for schools

With this partial veto, the state will continue its long budget impasse, though Wolf said he will free up emergency funding so that schools will continue to operate.

"This budget is very wrong for so many reasons," said Wolf, calling the proposal a "pretend budget" and asking legislators to return to Harrisburg to finish the work.

In discussing the Republican-led budget proposal that he reviewed, the governor said that the new proposal scaled back advances the state legislation had made in a compromise bill that fell apart in early December.

That $30.8 billion budget plan, which Wolf noted passed the State Senate by a vote of 43-7, would have increased school funding by $350 million.

In that compromised bill, Republicans got cuts in taxes and spending. 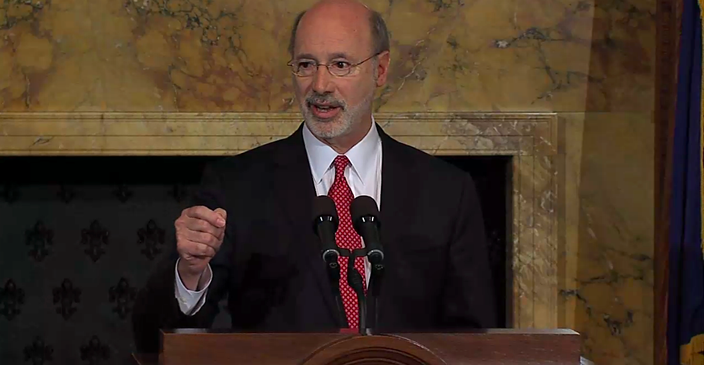 Of the $30.3 billion budget bill passed by the Pennsylvania House and Senate, Wolf said he was willing to approve more than $23 billion in state expenditures.

Wolf said the fact that the new proposal was so drastically different from the compromised budget proposal was "doubly frustrating."

"Because, we were so close to a reasonable one," the governor said. "We were almost there."

He called these new changes made to that compromised bill in the most recent proposal a "ridiculous exercise in budget futility."

"This budget they gave me doesn't balance," he said.

Among the many issues Wolf said he had with the proposal is that it would cut $95 million from education funding throughout the state and would include no new funding for many of the universities that receive some money from the state, including Penn State, Pitt, Temple and others.

In the short press conference Tuesday, Wolf called on legislators to return to Harrisburg and chided Republican elected officials for leaving town for the holidays and presenting a bill that does nothing to help overcome the state's ongoing budget impasse.

"They simply left town before finishing their job," he said. "And, they left all of us with a real mess."

While he didn't give a total number for the emergency funding for schools, Wolf said that he "doesn't want to hold schoolchildren in this state hostage" and called for legislators to return with a compromised bill.

"I've been doing this for six months," he said. "I thought we were making good progress."