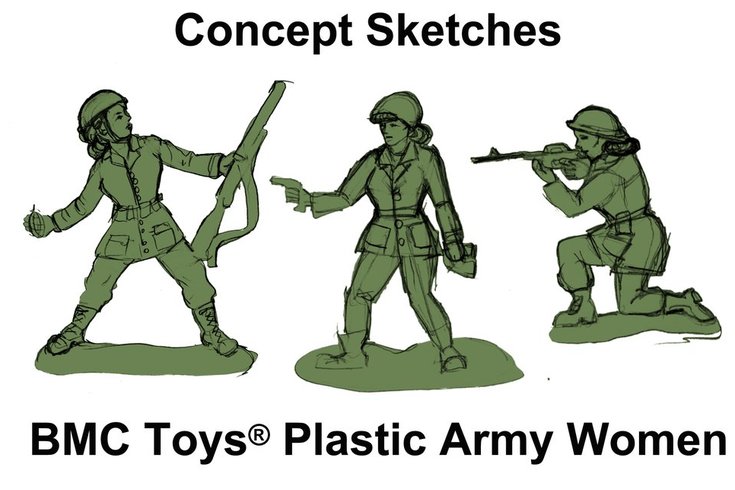 Scranton-based BMC Toys is working on a line of plastic army women, scheduled for release next fall.

The tiny green plastic army man is a timeless cheap toy. It dates back to 1938, and has basically remained the same since the 1950s. You probably have a dozen scattered around your house, in nooks and crannies and the toy chest.

What you don't have, however, is a tiny green plastic army woman. Next year, Scranton-based toy company BMC Toys will remedy that.

Jeff Immel, owner of BMC Toys, posted on the company's official Facebook page this week with a new product announcement: an incoming line of plastic army women, scheduled for release next fall.

Immel told WNEP that rolling out a new line of toy figurines would cost the company the price of "a modest new car," so he was hesitant to build the product line. But when he received persistent requests, including letters from a retired female Navy sailor and a 6-year-old girl, asking for equal representation, he realized it was time to make a change.

"I promised to conduct some research," Immel wrote in a blog post about the venture, "and discovered there might be enough folks looking for Little Green Army Women to consider producing some."

As of 2018, women represented 14% of the U.S. Army's enlisted forces and 18% of the officer corps, according to the Council on Foreign Relations.

For now, the company has three working concepts for the army woman figurines, based on preliminary sketches. The actual production, however, is a ways away, Immel said, so he's asking for feedback on what the toys should look like.

"Maybe having a set of plastic Army women will help some kid somewhere be the hero of their own story at playtime," Immel told WNEP. "And I think that's a good thing for everybody."