In opening Gritty City Winery, the Capuzzi brothers drew inspiration from their Italian grandparents. Their first homemade wines – a sauvignon blanc and a malbec – are available now 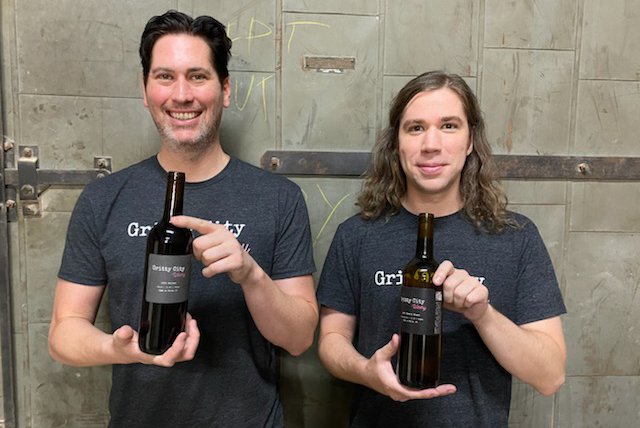 Gritty City Winery was opened by Mike and Tim Capruzzi, left to right, earlier this month. It will begin offering private tours and wine tastings in October. Their first wines, a sauvignon blanc and a malbec, are available now.

Mike Capuzzi started winemaking as a hobby while living in New York City about a decade ago. When he returned to Philadelphia at the beginning of the COVID-19 pandemic, he pitched his brother, Tim, on opening their own winery.

That idea came to fruition earlier this month, when Gritty City Winery opened in Olde Kensington.

The micro-winery, located at 1720 N. Fifth St., currently sells bottles of homemade wines on Fridays from 4-8 p.m., and Saturdays from 2-6 p.m. But the Capuzzi brothers intend to begin offering private tours and wine tastings by October.

"Our interest in wine stems back from our Italian grandparents, who immigrated to Philadelphia in 1920 and brought with them the family's tradition of home winemaking," Tim Capuzzi said in a press release. "This was always a really important tradition because it brought everyone together."

As self-taught winemakers, the Capuzzi brothers made their first batch of 300 bottles in Tim's basement in Conshohocken in May. They're currently producing about 1,500 bottles of 11 wine varieties to be sold at Gritty City Winery.

Though the micro-winery's name may conjure an image of the Flyers mascot, the Capuzzis chose the name to represent the spirit of Philadelphia.

"Our brand celebrates the grittiness of the city we live in, which we've always thought was part of its charm," Tim Capuzzi said. "We wanted to be down-to-earth (and) approachable to our customers. For our customers, you don't have to be a sommelier to enjoy our wine."

In particular, they envision Gritty City Winery helping Philly become a destination for micro-wineries, just like the city's craft beer scene has evolved in recent years.

Currently, the winery has two house wines available for purchase – a sauvignon blanc and a malbec. Eventually, the winery also will feature two of its nine reserves at a time, with 30 bottles available of each. Updates will be available regularly on Gritty City Winery's Instagram account.

During tours, visitors will have the chance to taste four wines accompanied by snacks, cheese pairings and fruit. They will visit the on-site production area and hear the brothers' backstory on the winery and their winemaking process. Afterward, visitors can purchase a bottle of wine and enjoy it in the courtyard, weather permitting.

Gritty City wines also will be available at Flanigan's Boathouse and the Below Deck Bottle Shop, which are both in Conshohocken, More Than The Curve reported.

Gritty City Winery also will participate in the Montco Beer Festival on Saturday, Oct. 15. The Capuzzi brothers say the winery eventually will do community events with Sunflower Philly, a nonprofit that aims to expand access to art, music and sustainable resources in North Philly, and other neighboring businesses.