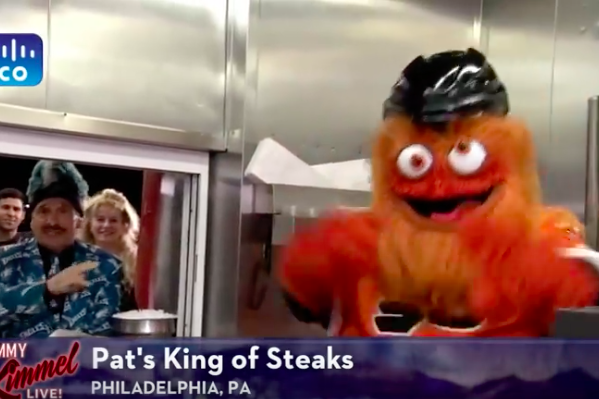 All week long, "Jimmy Kimmel Live!" has been preparing for its annual run of shows starting Monday at the Brooklyn Academy of Music.

MORE GRITTY: How to make your own Gritty Halloween costume on a tight (or big) budget

Hollywood can be suffocating, but nowhere near as much as the bus Kimmel's sidekick, Guillermo, took across the country to arrive at his destination. Guillermo is particularly distressed by the amount of flatulence that has overtaken the vehicle in such a short time.

On Thursday, we saw the hints that Guillermo's bus was making a stop in Philadelphia—naturally, for a cheesesteak.

This might have just been your routine "make making a cheesesteak look more interesting than it is" segment, but not under Jimmy Kimmel's watch. He called in Flyers mascot and global sensation Gritty, who apparently looked like some other guy named Barry on Thursday.

What did you do to Barry, Gritty? WHAT DID YOU DO?!