A group of Philly socialists posed for photos with Jeb! Bush on Thursday night 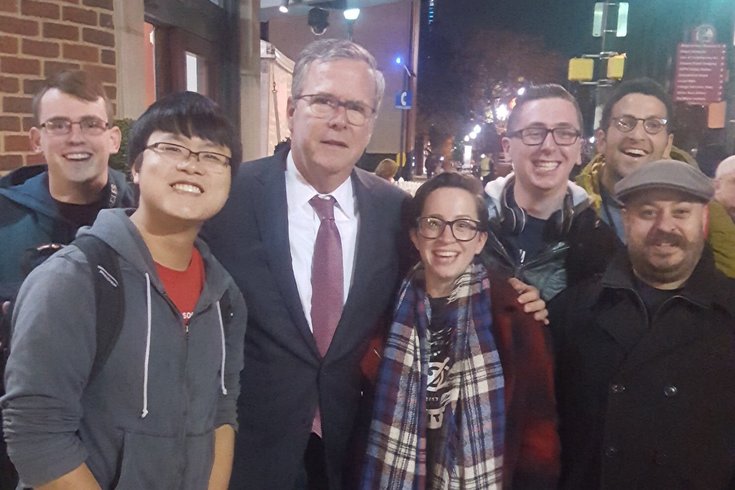 On Thursday night, Jeb Bush unknowingly posed for a photo with members of the Philly Democratic Socialists of America on the campus of the University of Pennsylvania. His reaction would change when they clued him in after an aide took the photograph.

The organizing meeting of the Philly Democratic Socialists of America had just wrapped up at the University of Pennsylvania bookstore Thursday night when several members walked outside to find somebody they weren’t expecting to see near 36th and Market streets.

“One of my comrades out of nowhere said, ‘Jeb!’ You can’t say that name without an exclamation point,” explained Alison Macrina, a Philly DSA member on hand for the magical moment about to unfold with Jeb Bush.

“Jeb!” – the former Florida governor, 2016 presidential candidate and member of the Bush family political dynasty – is at Penn a few days each month as part of the Andrea Mitchell Center for the Study of Democracy in the School of Arts and Sciences.

The DSA members wanted to make the most of this unexpected moment, of course, but time was not on their side.

“It all happened so fast. We tried to come up with a unifying strategy, and Jeb! wasn’t used to seeing so many young people so excited to see him, so he was all smiles,” said Macrina, noting all those smiles quickly turned into the idea of a group photo, which the Philly DSA members were all about doing.

“His aide took a comrade’s phone to take a picture and we started thinking, ‘F***, we can’t just take a picture with him,” she said. “We wanted to capture the moment where we flipped this all around.”

It was at that point where the conversation shifted to what the students were doing there at that time. One responded that they were a student group and another said they were an adviser.

“Rather serendipitously, Jeb! asked us what we were all meeting about, and what they were advising about,” Macrina recalled. “That’s when I yelled, ‘Socialism!’ You can see where his face fell, and he realized, ‘Oh no, what have I gotten myself into?’”

we walked out of a Philly DSA meeting to find Jeb! on the street and got a picture the moment we told him we had just been doing socialism pic.twitter.com/FfkiIbAASx

As Jeb and the aide quickly made an exit, the DSA members noticed that the next photo taken on the phone was of the aide’s feet. Apparently, they'd realized they'd been somewhat had.

According to Macrina, Jeb said something, as he was walking away toward "an event with a lot of fancy looking white people," to the effect that “socialism is great and all, but who is going to pay for it. One of her comrades responded “you and your rich friends.”

“I don’t know if I’m outing her in a bad way, but she was laughing when he was called 'low-energy Jeb,'” she said. “Welcome to the resistance, Andrea Mitchell.”

Mitchell, who was on campus for Thursday night’s ribbon cutting at the Perelman Center for Politics and Economics, did not immediately respond to a question via Twitter about whether it was, in fact, her or merely a doppelgänger.

“I started to feel a little bad for him,” Macrina said of Jeb. “But, you have to remember who he is, how he stole that election in Florida all those years ago.”