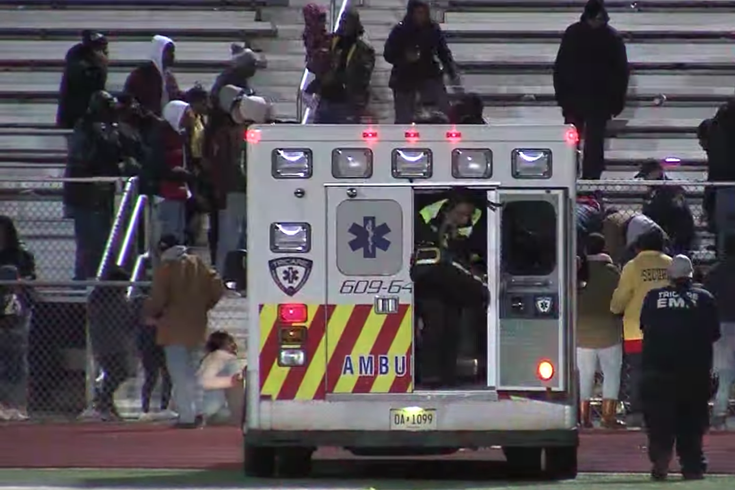 The ten-year-old victim who was shot last Friday at Pleasantville-Camden high school football game has died of his injuries, officials said.

Micah Tennant, of Newark, died Wednesday after he remained in a coma over the weekend.

The game, which was interrupted in the third quarter, is scheduled to be completed Wednesday night at Lincoln Financial Field in South Philadelphia. The Eagles reached out both high schools as a gesture of goodwill following the shooting.

Five people have been charged in connection with the shooting last Friday.

UPDATE, 7:25 p.m. (11/19): An Atlantic City man is charged with three counts of attempted murder and weapons charges in connection with the shooting Friday night at the Pleasantville-Camden high school football game, according to the Atlantic County Prosecutor's Office.

Four other Atlantic City men are also charged with unlawful possession of a weapon and certain persons not to possess a weapon in connection with the shooting, according to the Prosecutor's Office.

"Our community will not be held hostage by a few idiots intent on jeopardizing our safety and the safety of our children,” Atlantic County Prosecutor Damon G. Tyner said in a release Saturday.

Micah Tennant, the 10-year-old boy who was struck in the neck by a bullet, remained in a coma at Cooper University Hospital in Camden on Monday night. The 15-year-old victim has been released from the hospital.

In the wake of the shooting, the Philadelphia Eagles have invited both football teams to complete the interrupted game at Lincoln Financial Field on Wednesday, Nov. 20 at 6 p.m. The game will be open the families of those in the game but closed to the general public. It can be streamed at NJ.com.

Police told the Press of Atlantic City that the two victims included one juvenile and one adult, declining to release their names. Police didn't say whether a suspect was in custody. Both victims were alive and receiving medical attention Friday night, according to police.

At least two male spectators were seen being carried to ambulances on stretchers, according to the Press of AC. According to NBC Philadelphia, the juvenile victim is being treated at Children's Hospital of Philadelphia.

The Atlantic County Prosecutor's Office said it is investigating the incident.

Videos from the scene were circulated on social media Friday night, including this video of spectators and players running from the gunshots:

Breaking: As the shooting happens at the Camden/Pleasantville football game. People running, jumping fences, laying on the ground. @6abc pic.twitter.com/XzViuszadX

This video shows the shooting happening in real time, just after a punt:

The rest of the scene, described by eyewitnesses, sounded chaotic, per the Press of AC:

"Hundreds of fans raced with the players toward the school and tried to scale the fences. Derek Carrington and his brother David helped them get to safety.

"'We must have helped 15-20 people get over the fence,' Derek Carrington said. 'One woman came up to me and asked me to ‘please help her son.’ I just can’t believe something like this happened.'"

"After the stands were cleared, a Pleasantville police officer guarded the bleachers while carrying a rifle."

The Camden City School District released this statement about the incident:

"We are aware of a shooting incident which occurred following the Pleasantville - Camden football game where our school visited Pleasantville. We are able to confirm that no Camden High students were injured or otherwise harmed during the incident. A very special thank you to our coaches, security, faculty, and staff who were onsite and acted quickly to ensure the safety of all our students. Our thoughts and prayers are with the Pleasantville community in the wake of this unfortunate event."