In a messy Week 8 game against the San Francisco 49ers, the Philadelphia Eagles played some sloppy football ... and still won by more than three touchdowns, by the score of 33-10. As always, win or lose, we hand out 10 awards.

1) The 'Got Your Back' Award: The Eagles' defense

Earlier in the season, we noted that the Doug Pederson's offense was carrying Jim Schwartz's defense by staying out of three-and-outs, by converting third downs, and by dominating time of possession.

Conversely, when the offense hasn't been firing on all cylinders, the defense has stepped up. That was exactly the case on Sunday, as the Eagles smothered what is, admittedly, a terrible 49ers offense. Still, the Eagles forced six three-and-outs, and Jalen Mills' pick six came on what would have otherwise been another three-and-out.

The offense didn't have their 'A game' today, but the defense certainly did.

Carson Wentz did not have his 'A game' on Sunday, as he missed a wide open Alshon Jeffery on what should have been a TD, and later, a wide-open Brent Celek. He also threw a bad pick to Akhello Witherspoon, leading to a score going the other way. In fairness, he faced constant pressure all day, but we'll generously call this a 'C game' for Wentz, who has been lights out over the past month.

And yet, the Eagles still won by 26. That's what good teams do.

The Green Goblin took advantage of some awful quarterback play when he jumped a pass intended for, um, somebody. OK, it was Pierre Garcon, who was nowhere near the play when Mills made the pick. Once he intercepted the pass, Mills had an impressive return for a pick six.

Mills now has three interceptions on the season after having none as a rookie.

Alshon Jeffery's best skill throughout his career has been winning '50-50 balls,' or passes that are thrown up with the expectation that he'll make the play instead of the defensive back. We haven't seen much of that this season so far, until Sunday, when Jeffery skied over Niners CB Akhello Witherspoon, caught a Wentz throw, and scooted the rest of the way to the end zone.

.@TheWorldof_AJ goes up, gets it, and turns on the jets. #FlyEaglesFly pic.twitter.com/fi2AcEinr4

That is why the Eagles signed him, and that play was a huge answer to the previous Niners possession when they scored on a shovel pass after picking off Wentz.

And then the Eagles got silly, again.

The Niners were missing four defensive ends heading into this matchup, and they lost rookie Solomon Thomas for the day during the game. And yet, despite what the scoreboard said, the Niners' defensive front dominated the Eagles' offensive line at times, sacking Wentz three times, and hitting him seven times.

If the Niners' defensive line was 'dominant at times' as we stated above, I'm not exactly sure what superlative I should use for the Eagles' defensive line, who assaulted poor C.J. Beathard for four quarters.

The Eagles sacked Beathard four times, hit him 12 times, and belted him on multiple quarterback scrambles.

The entirety of the Eagles' starting defensive line (along with some backups) got in on the action:

Granted, the Niners' offensive line was banged up, but that is still outstanding team production from the D line.

We gave out this award last week as well, and hey, as long as they keep shutting down opposing rushing attacks, why not? On the season, here is what the Eagles have done to opposing running backs:

We'll once again primarily credit the starting front four of Curry, Jernigan, Cox, and Graham, though the Eagles have certainly gotten plenty of contributions from other players in the run game as well.

8) The 'Who the Hell Is That?' Award: Mychal Kendricks

In the fourth quarter with the Eagles up big, the Niners ran an angle route to running back Matt Breida near the goal line. In years past, running that route against Mychal Kendricks was like stealing candy from a baby. Think Theo Riddick on Thanksgiving, for example.

On Sunday, not so much. Kendricks did an outstanding job breaking up the pass to Breida with a diving PBU. Kendricks has had a great season so far, but that one play, in my view, shows his level of improvement more than any other.

He's simply a different player this year. He's suddenly better, and I don't know how or why. The Eagles are in capable hands with Nigel Bradham and Kendricks with Jordan Hicks done for the season.

Elliott made a 51-yard field goal Sunday, which makes him 5 of 6 on the season on kicks of 50-plus yards. However, he did miss two PATs.

I'd be scared of Jason Peters

Elliott may need another gentle reminder. 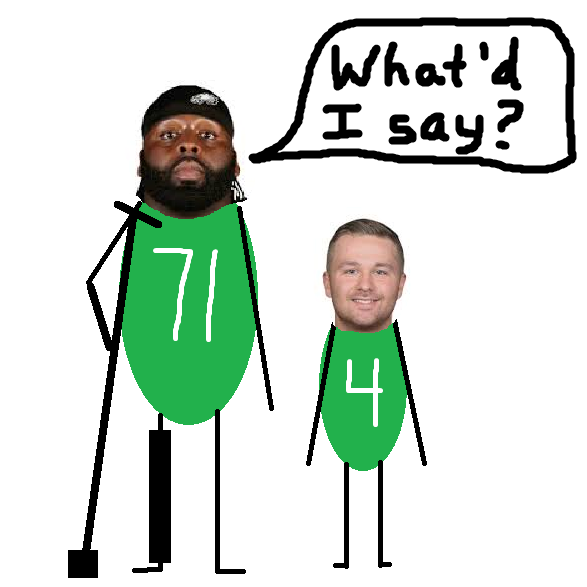 10) The 'NFC East Front-Runners By a Mile' Award: The Eagles

At 7-1 with a 6-0 record in the conference and a 3-0 record in the division, it's going to take a colossal meltdown for the Eagles not to make the playoffs. At the end of the day today, assuming the Cowboys-Redskins game does not end in a tie, they'll have at least a 2.5-game lead over whoever wins, and a 3.5-game lead over whoever loses, with a sweep of the Redskins in hand.