People are hanging their photos up in McGillin's, why?

'I simply asked her, What does one have to do to get on the wall?' 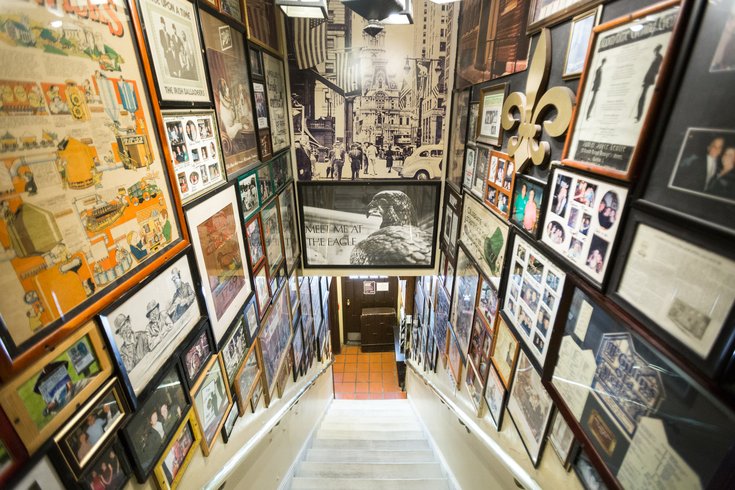 The stairway at McGillin's Olde Ale House, where framed photographs have been hung up by patrons and regulars.

In places like Nashville, where tourists flock year 'round, it's commonplace for visitors to scribble their names on walls, tables, doors in the city's most well-known bars – like Tin Roof and Tootsies.

In Philly, another bustling tourist hub, at the the city's oldest continually operating pub, it's locals who are leaving their mark, not the hundreds of vacationers passing through.

Take a walk up the stairs in McGillin's Olde Ale House and look carefully at the walls. Among the historical memorabilia are a few recent additions.

Patrons are starting to hang framed photos of themselves on the stairway walls. As far as owner Christopher Mullins, Jr. knows, it's a trend that hasn't happened before in the bar's 157-year history. 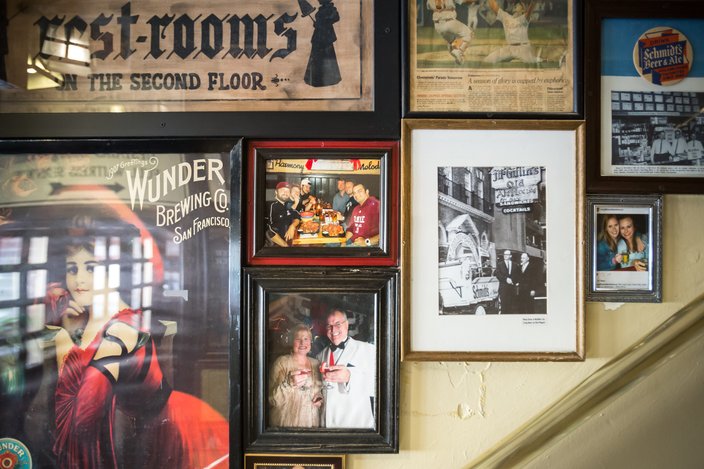 A photo of Evan Regan, (center in red), a long-time regular of McGillin's, and his friends showed up in the stairway leading to the bathrooms.

"I notice [a new picture] almost immediately because I go up and down those steps almost every day, and I've hung up every picture on the walls," Mullins said.

"It's not graffiti. It's almost the greatest honor. I can't imagine any bar that I frequent that I would want to hang my photo up in. I think it's [because of] that connection people feel to McGillin's [that it's happening]."

Evan Regas, a regular at the bar for the past six years, was the first to put his photo on the wall. When he was a student at Temple University, he and his friends were at the bar almost every Tuesday for wing night.

"I think it is nice to have a great memory forever enshrined at the oldest bar in the city. I tell everyone that goes there where it is. It's funny, I'll get texts once in a while from friends of the picture and everyone's always surprised and slightly jealous," Regas said.

The photo, taken at one of the bar's tables, was hung up by McGillin's manager Gaby Gock.

"I was talking to Gaby one wing night with my buddies and I simply asked her, 'What does one have to do to get on the wall?' She told us to bring in a framed picture and she'd take care of it. We spent a few months on top of the window on the first floor until we were given our spot on the wall," Regas said.

Friends Michelle Carroll and Jill Kaputa have their photo on the wall, too. Their framed pic is one that was originally posted on McGillin's Instagram.

"We've been going to 'Gils' since we both turned 21. From September to May, we're regulars, but we go to Sea Isle City for the summer. We printed and framed the picture and gave it to Gaby as our 'going away for the summer present'," Kaputa said.

"We did it as a joke and thought it would be placed behind the bar, but now it's hanging on the wall," Carroll said.

"You hang pictures of your family on the wall, and they want to be part of our family," Mullins said.

There are others, though, who have hung their picture up without the assistance of McGillin's staff. They aren't regulars, but they seem to love the bar. 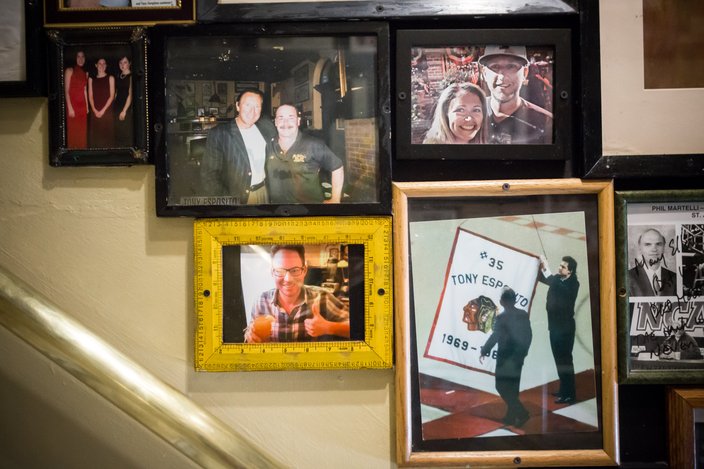 Two additional photographs, one of a man and woman, (top right), and another of a man giving a thumbs-up while holding a beer also showed up in the stairway at McGillin's.

"There's probably eight [patron's photos] hanging up now, but we might have had [a total of] 16 over the years. When people do it on their own, they put them in very cheap frames and slap them up there on the wall, then they get knocked into and cracked and broken," Mullin's said.

Those who want to ensure their photo finds a permanent home on the wall should take into consideration Mullin's guidelines.

Those who want to ensure their photo finds a permanent home on the wall should take into consideration Mullin's guidelines.

For starters, make sure the photo is one that was taken in McGillin's. That picture from your family reunion at the beach might be great, but it's not going to last on the bar's wall (There's only so much space available!).

If the McGillin's staff can recognize your face, then it's more likely your photo will stay on the wall, too.

After choosing the best shot, use plexiglass in the frame so it won't shatter. And if you really want to go above-and-beyond, pre-drill holes into the frame so the McGillin's staff can anchor it to the wall.