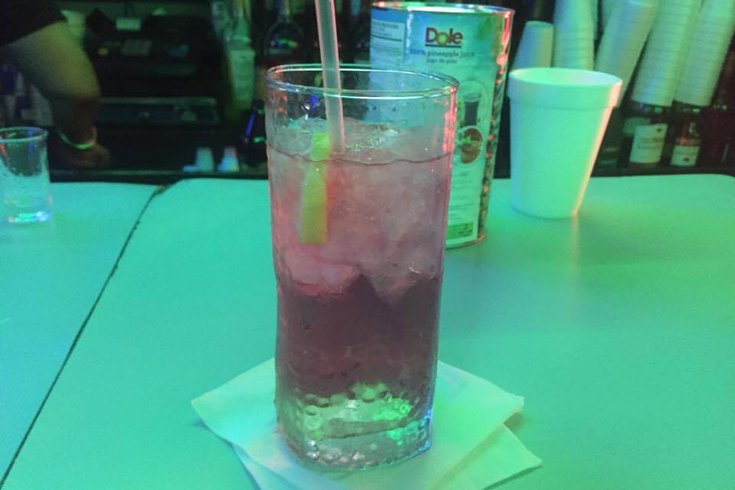 Drink number one at Mr. Chicken and Bernice Bar.

On a sultry Wednesday afternoon, I took the Broad Street Line to Hunting Park with one goal: get incredibly intoxicated very quickly.

My destination was the Philadelphia bar that says it can get you drunk in one drink.

Mr. Chicken and Bernice Bar is at 2045 Dennie St. in the Nicetown neighborhood of North Philly. It's gotten a bit of a bad rap during the past few years: a shooting that left one man dead and a health-related closing last year didn't help.

Despite all that, the bar is still going strong, according to the bartender working her early once-a-week shift. Wishing not to be identified, she explained the bar has a number of regulars who enjoy the cheap prices and large portions.

When I say large portions, I mean incredible amounts of alcohol served to a single person. What drew me to Mr. Chicken and Bernice's in the first place was an Instagram post highlighted by the news website BillyPenn showing the sign outside that promoted the simple slogan: "1 drink & you're drunk!"

It's a pretty bold claim. After all, varying tolerances mean what is enough to get one person sloshed is barely enough to get another buzzed. How could they make such a guarantee, I wondered. I had to find out.

I entered the bar around 1 p.m. and explained my quest to see if the claim was true. I could sense the initial skepticism from the bartender about my intentions. But the more and more we talked, the more she interpreted my query as a personal challenge. "This kid wants to see if he can get drunk in one or two drinks?" I imagined she thought. "Alright, buckle up." 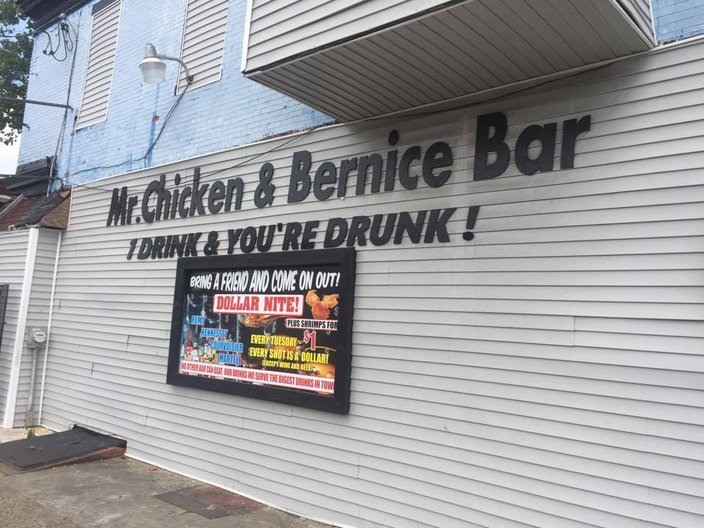 Mr Chicken and Bernice Bar in the Nicetown neighborhood of Philadelphia.

DRINKING IN THE SCENE

The bartender bluntly explained why Mr. Chicken and Bernice's serves such strong drinks. Unlike partiers coming to drink in trendy Center City neighborhoods, she said, people coming to "the hood" to drink have one goal: get as much alcohol as they can for the least money.

She also prefaces the "1 drink and you drunk" claim with plenty of disclaimers. After all, whether or not you choose to have a mixer with your alcohol may affect how drunk you get. More experienced patrons usually have a glass of water to accompany their beverage, she explained.

Then she began to pour. I asked for whatever will get me plastered, and she asked what type of liquor I want. Vodka. She pulled out a hefty pint glass, a shot glass and a bottle of Absolut.

Three shots go into each drink, the bartender said. But as she poured the liquor over the shot glass into the pint glass, nearly a full shot of overflow accompanies each pour; by my count, there are at least six shots of vodka in this single glass I'm about to consume.  For six dollars, it's certainly a good bang for the buck.

The bartender stopped in the middle of a story to ask if I was alright. I said yes, but I was lying.

My cocktail is topped with a spritz of cranberry juice. Many customers just drink their liquor straight, she said. But it doesn't usually lead to problems, as those patrons often know exactly what they're getting into. It's the younger drinkers — those who just turned 21, for example — who sometimes become a bit of a nuisance, she said.

I take a sip of my drink and purse my lips like I had just shoved a handful of sour candies into my mouth. The cranberry juice "mixer" is almost undetectable. It's as if I'd just taken a swig straight from the bottle.

Halfway through the drink, I'm already fuzzy. A man and a woman walk in — regulars, the bartender said — and the drink ordered by the woman puts me to shame. Three shots (read: six shots) of straight Grey Goose in an oversized wine glass with a pineapple slice wedged onto the rim. She drinks carefully from her glass, seemingly unfazed with each sip.

Meanwhile, I'm balancing the line between coherence and inebriation. If you've ever had a little too much to drink, and wondered if other people can notice, here's a tip: You're probably right. After I had slipped from talkative, inquisitive writer into quiet recluse looking at my phone, the bartender stopped in the middle of a story to ask if I was alright. I said yes, but I was lying.

This is when things get weird. I finish and ask if the bar is cash-only — yes. There's a convenience store down the street with an ATM, but Frankie — the man in the couple — doesn't want me walking alone in the neighborhood. So he drives me to a local Walgreens to use the ATM. Frankie owns a painting business, but used to drive a tractor-trailer. The bartender is his sister. He drinks wine now (he hasn't had a drink yet, for those concerned about him getting behind the wheel), but used to enjoy his sister's famous Long Island iced teas. 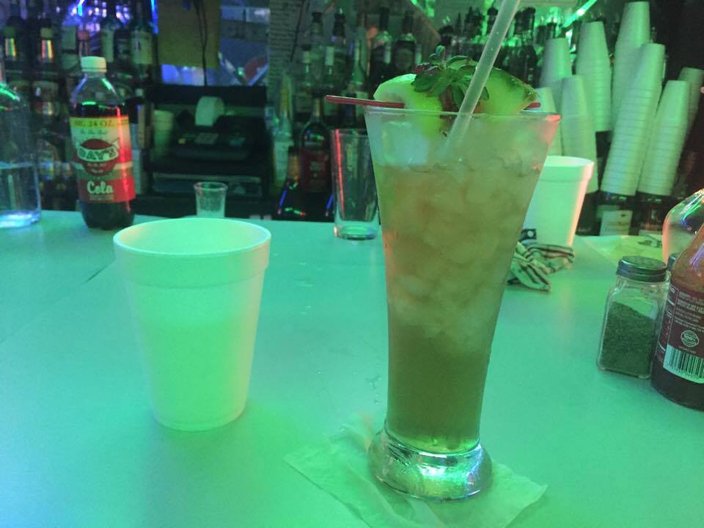 When we get back, the bartender asks if I want another drink. At this point, I've sobered up a bit, but still have some vodka-fueled – and unwarranted – confidence. Give me one of those iced teas your brother used to love, I tell her.

She proceeds to concoct a drink like a teenager running wild in his parents' liquor cabinet. Four bottles are retrieved: Seagrams, Absolut and two other liquors I can't remember. Their contents are sloshed haphazardly into a glass, filling it about four-fifths of the way up. About eight shots, I estimated.

Additionally, some Peach schnapps is poured in to sweeten it up and help "ease" me into the drink, the bartender explains. "But doesn't schnapps also contain alcohol?" I wondered. Too late.

The first drink got me drunk; the second drink kicked my ass. I slur my goodbyes and Uber home.

The iced tea part consists of a tiny amount of triple sec and a dash of generic cola. There's so much liquor that the excess amount is literally poured into a separate Styrofoam cup, enough for its own separate drink but meant to be poured back into the glass after the drinker finishes the first portion.

It should be noted that my drink is hardly the strongest sitting on the bar. The man next to me ordered straight whiskey into a 16 oz. coke glass. No ice. No mixer. Just a full glass of whiskey.

For the sake of journalism, I finish. The first drink got me drunk; the second drink kicked my ass. I slur my goodbyes and Uber home. I couldn't believe how drunk I was. After passing out for a few hours, I can safely say I was still a little buzzed as I wrote this.

Mr. Chicken and Bernice's is being rebranded as "Buffy's," according to the bartender. Bernice passed away few years ago. Her picture is on the wall. Buffy is the owners' daughter, she says, and she's taking over the bar. They're currently hiring security guards, chefs and barmaids. The barmaids have to be "responsible" but also "a hustler," according to a sign hanging from the ceiling.

I had come for the gimmick: "1 drink and you're drunk!" Don't get me wrong, I did get trashed. But on top of that, I was treated to a classic neighborhood bar experience, where everybody knows your name (except me). The bartender and regulars were clearly amused by my quest, but also incredibly welcoming and friendly.

I plan on going back to Mr. Chicken and Bernice's in the future. Next time, however, I plan to eat a bit more before visiting and ordering that glass of water the veterans get.

One thing's for sure: The sign outside is no joke. One drink, and you are positively drunk. If you stop by, pace yourself. Otherwise, you may be waking up in the late evening hours, reheating pizza and gagging at the thought of alcohol ever touching your tongue again.

Trust me, I would know.