Colleen Campbell, 28, has since been fired by her employer, PHL17 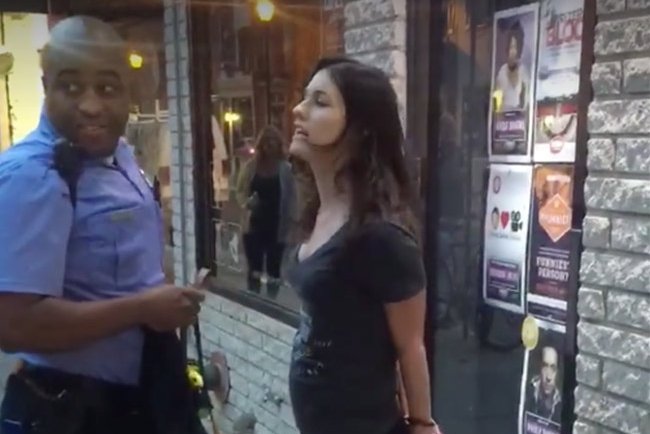 A jarring incident that happened outside of Helium Comedy Club in Center City over the weekend was captured on video and quickly spread on the internet, which meant bad news for a local journalist.

Wil Sylvince, a New York City-based comic, shared a five-minute-long clip to his Facebook page Monday that shows a woman yelling obscenities and attempting to spit on someone before a police officer later handcuffs her.

The catch? The woman shown in the video says that she's an employee of PHL17. Philadelphia Magazine was first to report the incident and identified the woman as 28-year-old Colleen Campbell, an on-air talent for the station.

Campbell hails from South Jersey and earned a bachelor's degree in journalism at Temple University in May 2016, according to her personal website, which has been deleted.

Tribune Company, PHL17's parent company, told PhillyVoice on Tuesday morning that Campbell "is no longer employed by" the news station. Tribune did not immediately confirm how long she was with the company.

Campbell's official title was "per diem news production" and was used as occasional on-air entertainment. A source told PhillyVoice that Campbell is also no longer employed by Devil's Den, where she told the magazine that she worked as a bartender.

In the video, Campbell told the officer to "lick [her] a--hole" after he told a man she appears to be with that he "just wanted [him to] take her."

"That's why nobody likes f---ing police, because they all stand up for f---ing idiots in this f---ing town," she's heard saying in the video.

According to Sylvince's Facebook post, Campbell was allegedly "disturbing" a show at the comedy club with her "loud whispering." She was asked to leave after being warned by the club's staff.

The video appears to show Campbell acting like she is going to spit in a person's face; Sylvince wrote that person is the club's manager.

Craig Robinson, who is known for playing Darryl Philbin on "The Office," was performing at the club Sunday night, according to Helium's event calendar.

"No wonder everybody wants to blow your f---ing heads off," she later said.

Sylvince's video has been viewed more than 1 million times since it was posted Monday.

A police docket shows that a 28-year-old Colleen Campbell was charged Monday for resisting arrest, criminal mischief and disorderly conduct. She is due to appear in court on June 13.

Campbell told Philadelphia magazine in an exclusive interview Tuesday morning that she "feels awful," but doesn't remember the incident and was unaware that there was a video. She raised the possibility of being drugged on Facebook, according to the news site.

Campbell has not returned PhillyVoice's request for comment Tuesday.