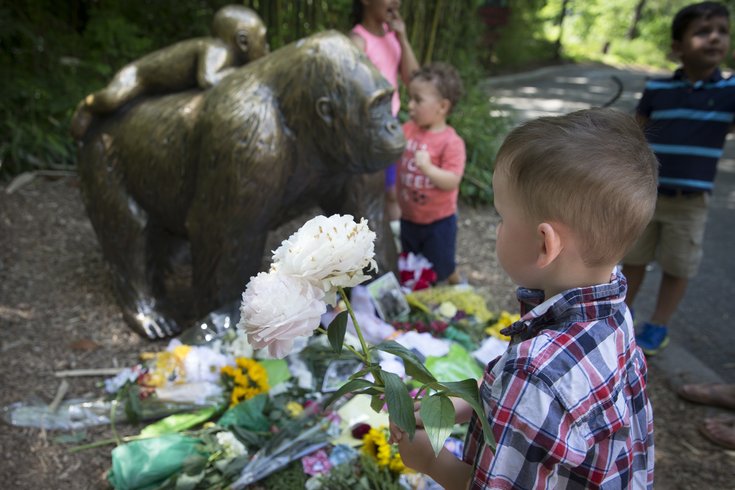 A boy brings flowers to put beside a statue of a gorilla outside the shuttered Gorilla World exhibit at the Cincinnati Zoo & Botanical Garden, Monday, May 30, 2016, in Cincinnati. A gorilla named Harambe was killed by a special zoo response team on Saturday after a 3-year-old boy slipped into an exhibit and it was concluded his life was in danger.

You’ve heard about Harambe, I’m sure.

You know, the Cincinnati Zoo gorilla who was fatally shot Saturday after a 3-year-old boy somehow made his way into the enclosure. It was a sad and unfortunate incident that unleashed a torrent of hot takes about safety, the nature of zoos themselves and parental responsibility. (Still doesn't ring a bell? See here, here and here.)

And when that happens, the social media response is everything from abhorrent to amusing.

I summarized it thusly:

If not for Twitter, I'd never have known how many folks are well versed in taming zoo gorillas with nothing but smarts and moxie.

I was not the only person who weighed in on the Memorial Day weekend tragedy. Here’s what other people had to say, organized loosely by theme:

If your kid purposefully falls into a gorilla cage, you should just tell your kid goodbye. That's called Darwinism.

The penalty for momentary bad parenting should be watching a gorilla crush your toddler's skull? Is that where we're at?

No parent with multiple young children thinks the parents of the kid who fell in the gorilla pen should be charged.

On backlash over zoo's decision to kill gorilla: "I am old enough. I don't pay much attention to social media." pic.twitter.com/Oo65VYYrEY

doing the ice bucket challenge for the gorilla

At Breitbart, the right wing pro-Trump base reacted to the Cincinnati gorilla story w/ thousands of racist comments https://t.co/JEpPLQC3KW

Stories with absolutely no connection to what happened at the Zoo!

Father of boy who fell into gorilla's zoo enclosure has a lengthy criminal history https://t.co/vc7bBQiVrm

From near tragedy to political posturing!

Harambe paid for human negligence with his life. 🐒
THIS is why we need to #BoycottTheZoo.https://t.co/c1F9peuKPO

So now that we know that the child was Black, there will be a lot of folks demanding justice for Harambe this week

Shout out to everyone who cares more about #Harambe the gorilla than about #MikeBrown, #RenishaMcBride, #TrayvonMartin, #TamirRice,
...

Laura Ingraham CALLS OUT Hollywood over 'candlelight vigil' for the gorilla while ignoring veterans https://t.co/XT4hO5VnHQ

And, finally, the hottest takes!

PLEASE morning shows, don't put these idiot parents on your programs. The gorilla is dead. NO ONE wants to hear from them. #Harambe

Heard they killed a gorilla because a grown adult isn't fit to be a parent..

Should've shot the parent too..

What if the kid that fell into the gorilla pit turns out to be the next Hitler? Sorry if this offends