'The answer is not only no, but hell no' 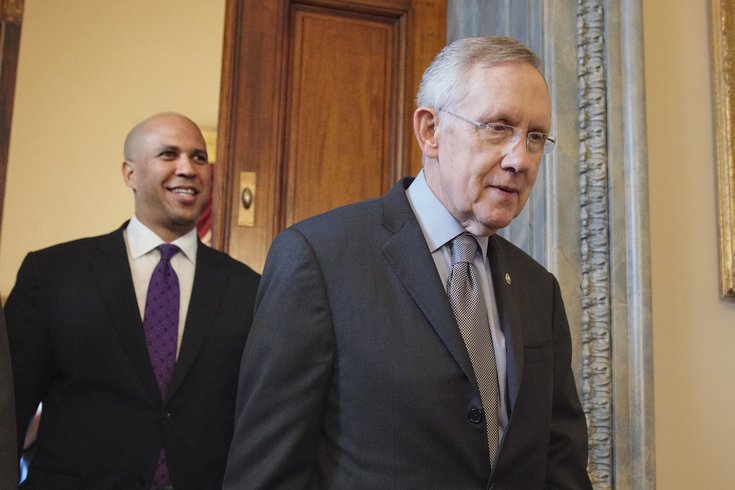 Senate Majority Leader Harry Reid, D-Nevada., walks to a meeting in his Capitol Hill office with the then newly-elected Democratic senator from New Jersey, Cory Booker, left, at the Capitol in Washington, D.C., in a photo taken Oct. 31, 2013.

Those bubbling rumors about Sen. Cory Booker of New Jersey as a possible vice presidential pick by likely Democratic nominee Hillary Clinton? They may have been dashed Monday.

Senate Minority Leader Harry Reid was asked in an interview on MSNBC about the possibility of Sens. Elizabeth Warren, D-Massachusetts, and Sherrod Brown, D-Ohio, joining the ticket with Clinton. Reid's response: If there's a Republican governor in a senator's state, "the answer is not only, 'No,' but, 'Hell no.'" (Video of the segment of Reid's interview below):

Booker isn't mentioned, but with Republican Gov. Chris Christie serving the Garden State until 2018, it looks like Reid will likely try to stop him from leaving the Senate to team up with Clinton in a general election battle against Donald Trump.

Why? Governors choose replacements for vacated Senate seats. A Republican governor means — at least until the current term runs up or a special election is held — a Republican senator.

With it looking bleaker and bleaker that President Barack Obama's Supreme Court choice Merrick Garland will ever even get a Senate hearing, Democrats may soon have to turn their attention to 2017 and hope to have another president from their party in the White House.

But if the Democrats are able to win back a Senate majority — something that's looking more and more possible — that means, with Clinton they'd have the choice of nominating a more left-leaning judge, as opposed to compromising with Republicans and choosing someone more moderate.

Reid is clearly focused on trying to win back the Senate before he retires and believes the value of any of the potential VPs currently serving in the chamber to the ticket isn't greater than the loss of essentially giving up a seat to the GOP.

So sorry, Jesse Eisenberg: If the very influential Reid has his way, it doesn't look like Booker will be seeking the White House just yet.