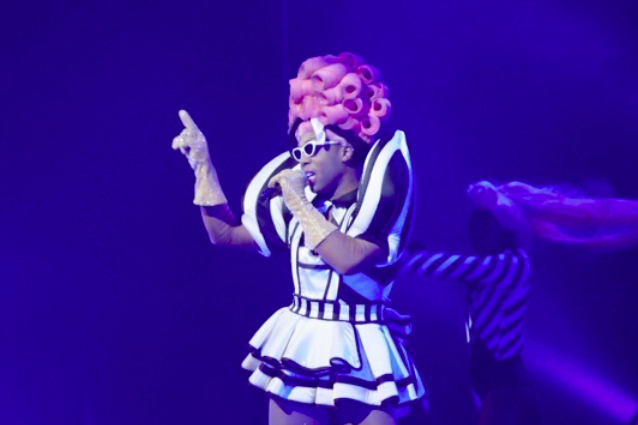 Texas-native Todrick Hall could have made his career as an “American Idol” finalist into something typical – some road show musicals, a reality show or two. Instead, he took the bull by the horns and forged a career as a songwriting singer choreographer, playwright, costume designer, and Broadway performer. Along with all that, Hall (whose Broadway credits include Oprah Winfrey’s “The Color Purple” and as Lola in “Kinky Boots”) is a YouTube sensation with more than 2 million subscribers and 400 million views. Now, he’s got an new album, "Hall American," and a highly choreographed production coming to The Fillmore this coming Monday.

Q: As a one-time “American Idol” contestant, have you been paying attention to the current season? And are you a big Katy Perry fan?

A: Sad to say, I have not been able to watch the new season as I haven’t had the time, so I can’t pass judgment on the show or the judges. I am a fan of Perry’s music and I do think that she does cool music videos.

Q: Then there’s the other reality-competition show that you have been a part of: “RuPaul’s Drag Race.” In fact, you may be the only person who has been a judge and a choreographer and a drag personae lip-syncing for their life. Which part was harder?

A: (Laughs) They were such different roles. I loved choreographing the numbers part as I believe I helped give the girls confidence. That’s a big deal. They have it when it comes to the wigs and the outfits, but you can never have enough when it comes to the dancing. There’s an amazing amount of strength involved in dancing. For me to help bring stuff out of them they never knew existed is great – to see which ones soar and which ones stumble is fascinating, too.

Now, appearing in drag was a whole other story. I do not consider myself to be a drag queen by any means. That would be disrespectful to those who spent so many years in the art form. I give much of the credit to those who put me in the makeup and wigs.

Q: That said, were you comfortable dancing in high heels?

A: Oh yes. I’m a dancer, so being in heels is just like walking on my toes. I’ve been wearing heels for a very long time. High heels have never been a struggle.

Q: You finished doing the road show run of the Broadway musical “Chicago” not so long ago. You are so young to have played the bad news lawyer “Billy Flynn.” How did that show treat you?

A: I loved it. I have already performed a few “Chicago” parodies on my YouTube channel about it. That was one of the first musicals that I ever witnessed as a child. And it was amazing to play such a prestigious role as his. It was a challenge being too young for “Billy Flynn.” I just had to stay true to who I was and the integrity of the creators such as Bob Fosse. I think I really grew for that role. I’m more than a person who can do more than silly viral videos. I believe that was the impression that I started to give fans who only knew me from YouTube. I mean, I have been on Broadway and dancing ballet since I was a child.

Q: Was your first name-above-the-title stage show “Straight Outta Oz” what helped show people that you were a dynamic visual conceptualist away from YouTube?

A: Yes. I was able to show off my writing abilities and was able to present something closer to my life – and therefore, touch the lives of those around me rather than just be a goofball on YouTube. That show changed the game for me.

Q: You mentioned YouTube – is it a curse then or a blessing?

A: Neither. It’s just a series of lessons – just like high school was or being a cheerleader was. I don’t have those types of regrets. Besides, there is some amazing choreographed and intricately costumed showcases there that have received 30 to 40 million views each. I just needed to move from parodies into something that proves all of my talents.

Q: So seeing you on Monday night – what will an audience get for its money?

A: I believe it is the perfect middle point between a Broadway show experience and a live concert. We have over 100 costumes. We highlight all the best and most popular of my YouTube videos. I believe this show will make you get up and cheer and be proud to celebrate all walks of life. I think in this current political climate, if you can have a night free from drama – and celebrate a new generation of kids who are changing the world – you’ll feel all the better for it.