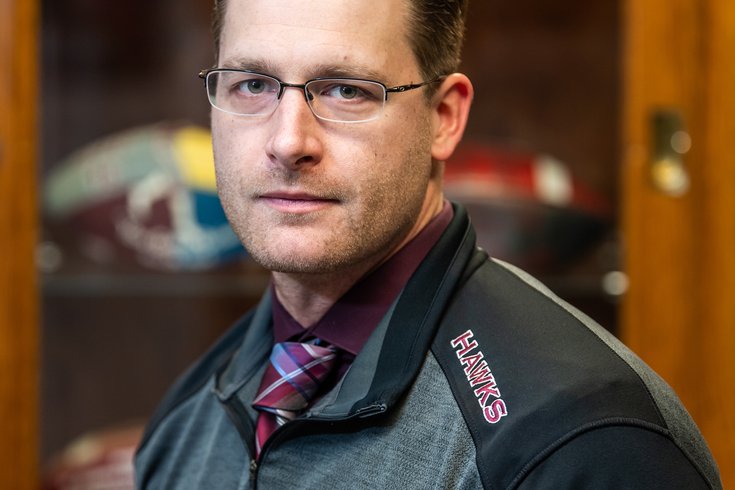 Tim Roken looks tired, his eyelids somewhat droopy after another long night of preparation. But it’s a happy fatigue and it’s only early August. Football season hasn’t technically begun, yet he has a full itinerary of things to address, like shoe sizes, barbecue cuisine, helmets, gear allotment and what time practice will begin the next day.

He’s 33, sitting in an office full of pictures, championship rings, and reminders of what he helped build and now what he’s in charge of maintaining. It’s a role that has taken him a decade to ascend to. It’s a position he’s earned—and that he deserves.

Being the head football coach at St. Joseph’s Prep comes with a heavy dose of prestige, achievement and pressure. It’s unlike any position in Pennsylvania, because the Hawks’ program is unlike any in the state.

It’s a college program under the guise of a high school. If you go to St. Joe’s Prep, you’re in a highly, academically demanding environment playing for more than a PIAA 6A state title. You’re playing for a national championship, being seen on national TV by major college recruiters, which results in a great opportunity to play college football on a scholarship.

It’s why currently no other high school program — locally or statewide — compares to St. Joe’s Prep. And it’s why most — if not all — area programs secretly hold a modicum of contempt for the tiny Jesuit school on Girard Avenue.

Tonight at 7 p.m., Roken will again be on national TV for the second time in three weeks, roaming the sideline at Rutgers’ SHI as the first-year head coach of the nationally ranked Hawks facing another national powerhouse in IMG Academy.

Roken’s role was forged through dedication, loyalty and a good amount of trust in a dynamic, charismatic leader, former Hawks’ coach Gabe Infante, who moved on this year to be Temple’s running backs coach under new Owls head man Rod Carey. Infante had been grooming Roken for some time to be his successor.

But to get here, Roken had to take a very circuitous route. A 2004 Archbishop Ryan graduate and 2009 East Stroudsburg grad with degrees in sports management and business, Roken did everything from waiting tables at Baby Blues restaurant, to landscaping, to working in sales and construction, all to do something that, in a sense, he swore to himself he would never do.

“When I graduated high school, I thought at the time the last thing that I wanted to be was a teacher,” Roken says with a grin. “My sister is a teacher; my family are teachers. I have a ton of cousins who are teachers; aunts, uncles, they’re all teachers.

“I wanted to take a different route. I thought maybe a physical therapist or maybe criminal justice. I played sports my whole life and I love sports, so I figured why not sports management in college.

“Now look at what I’m doing — teaching. I laugh now because once I became a coach, I’m a teacher in different ways. I tried to get out of being a teacher, and God placed me right where I’m supposed to be. My daily plans and my message every day requires teaching.”

Though in late May 2010, Roken didn’t really know what he wanted to do until a phone call.

Upon graduating East Stroudsburg, where he was a two-year starting quarterback, Roken got a fulltime job with All-American Games, which owns Football University that holds camps across the country and is responsible for putting together the U.S. Army All-American Bowl. It was a sports management job that enabled Roken to dabble in coaching at some of the camps.

Brett Cooper, who runs his own camps and national game, was working at the time with Roken, gathering talented high school players from across the country to play in the All-American Bowl. One call in May 2010 happened to be to Gabe Infante, the new head coach at St. Joe’s Prep who inherited a volatile situation after the firing of popular coach Gil Brooks.

That’s when he turned the phone over to Roken.

The conversation was more than an introduction. It was life changing.

Infante invited Roken to “The Prep,” where despite facing the team many times and being fully aware of St. Joe’s Prep, Roken had never been to the campus prior to their first meeting in mid-May 2010. Infante had his older brother Ray and a few coaches he brought down with him from North Jersey.

“I remember being extremely nervous; Gabe is intense, whether you know him or not,” Roken said. “What swayed me was Gabe’s passion, because at first, I still didn’t know whether coaching was the move that I wanted to make. 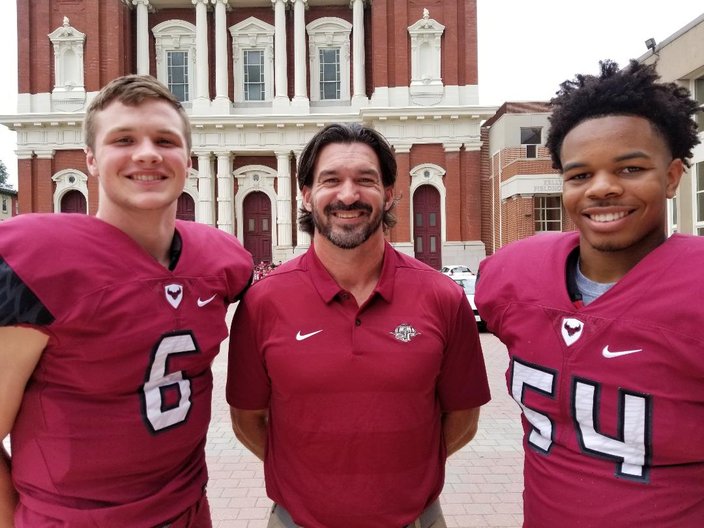 “Gabe has a way of calming you down and talking to you. The message sinks in and gets through. We spoke three times and Gabe was looking to start in June 2010. It was partly the power of Gabe and my subconscious mind pushing me there.

“I was fresh out of college and I was asking myself if I wanted to move back home? The conversation was do I leave my fulltime job to coach high school football, and do what my gut was saying, or play it safe with what I had?”

Roken listened to his gut — and walked into a maelstrom.

Brooks was a lightning rod. He could curse and coddle, though someone incredibly dedicated to The Prep and to his players. A highly successful lawyer, Brooks could be found on early Saturday spring mornings running plyometric drills with his team. The administration at the time didn’t like his tough-love approach. When he was dismissed in May 2010, many of the prime student-athletes that planned on playing for Brooks left — as did the coaching staff.

Infante was supposed to be a “stopgap coach.” What he turned out to be was the most successful coach in the storied history of St. Joe’s Prep football. He began with nothing, and Roken was part of the crew enlisted to pick up the scraps.

In their first season under Infante, the Hawks were 4-7 and many coaches in the area were counting down the days until Infante was gone.

It turned out to be a grave miscalculation. The first year Infante ran an open house, there were less than 50 people that showed up at the school. By 2014, there was a meandering long line through the front doors waiting to see the inside of The Prep.

“We struggled those early years,” Roken admitted. “Gabe would schedule these powerhouses at the beginning of every year and we’d get our brains beat in, down 35-0 at halftime. As a young coach, at first, I didn’t understand why we played those teams.

“But you start to see the transition. You start to see the guys becoming more confident and entering the Catholic League season with unbelievable confidence. Then, we started beating the teams that used to pound us. But I would say the breakthrough was 2013. We got to Hershey against Pittsburgh Central Catholic, and someone made us 35-point underdogs.”

What no one figured on was Chris Martin, a little-used running back who happened to be playing around on the sideline one practice throwing the football. Roken liked what he saw. When the Hawks’ starting quarterback got hurt, Infante and Roken took a chance and turned the offense over to Martin.

In 2013, with a partially torn ACL that he lied about so he could play, Martin led the Hawks to their first state title in a stunning 35-10 upset over Pittsburgh Central Catholic.

It was a season that not only launched Prep, it launched Roken.

Martin, 23, now a Johns Hopkins graduate with an economics degree, recalls how he, Roken and coach Tom Sugden would break down film every Thursday night. They went over blitz packages, secondary alignment and opposing team’s tells. The small pizza party gradually grew a few more players each week and by the end of the season, half the team jammed into the film room.

Forcing Roken to dig deeper into his pockets for more pizza money.

“I got thrown into the fire and coach Infante asked me if I wanted to stay with it at quarterback,” Martin recalled. “A big reason I had success was coach Roken. The one thing that sticks out is how much he genuinely cares about his players; he would stay there late for anyone.

“At the end of walk-throughs, coach Roken always told me to take my shots. I took a lot away from coach Roken. I credit both coach Roken and coach Infante for getting everything out of me that was there. Honestly, that experience taught me new levels of confidence. That comes from what coach Roken and coach Infante always preached and that’s trust and love. A lot of confidence comes from how you are perceived by others. We didn’t care what other people said or thought beyond the four walls of our locker room.”

What made Infante a quality head coach is the time he spent as an assistant coach. During Roken’s nine-year tenure under Infante, he received a handful offers to coach elsewhere. He stayed. Roken credits part of that commitment to his father, Fran, a sheet metal worker for 30 years.

“I’m proud of Tim and all of those guys,” said Infante, the 2019 National High School Football Coach of the Year. “Part of the deal when I left was that Tim took over. He’s ready for this. He’s always been ready for this. The best thing I can say about Tim was that he always treated the program like it was his.

“The hardest thing for a young coach is finding ways to get to the next year. Tim did all of that. He took on odd jobs. I remember when I left for three weeks to work with Team China as a consultant. I remember calling Tim in the summer of 2016. I turned the team over to him. Tim’s strength is how poised he is. He took over without missing a beat.

It’s like Infante’s Captain Kirk to Roken’s even Mr. Spock.

“Our growth is intertwined and that was the hard part about saying goodbye,” Infante said. “We still talk. I told Tim before the St. John’s game (last week), trust yourself. Even now, it’s beautiful to see Tim evolve. I’m really proud of how they all stayed together. I’m really proud of Tim.”

Infante left and the coaching staff did stay intact. That’s a testament to Roken.

“Gabe has been preparing me for this and I didn’t even know it,” Roken said. “I can see myself using the same ‘Gabe-isms’ he used and the experiences that I’ve had here have helped me deal with everything today.

“Things have changed. They’ve changed within the last five years alone with the way social media and recruiting has impacted high school kids and parents. I struggle with the fact that today, kids don’t compete. What happened to competing for a job? We can’t let kids run from competing. They don’t compete the way prior generations did.

“I want my kids to compete. We try to instill a blue-collar mentality. We have a standard. It’s a high standard and I want to uphold that.”

Under a new head coach the first month of the 2019 high school season, the Hawks are still winning. They’re beating national-caliber teams and are on the verge of playing yet another.

It’s as if nothing has changed at St. Joe’s Prep