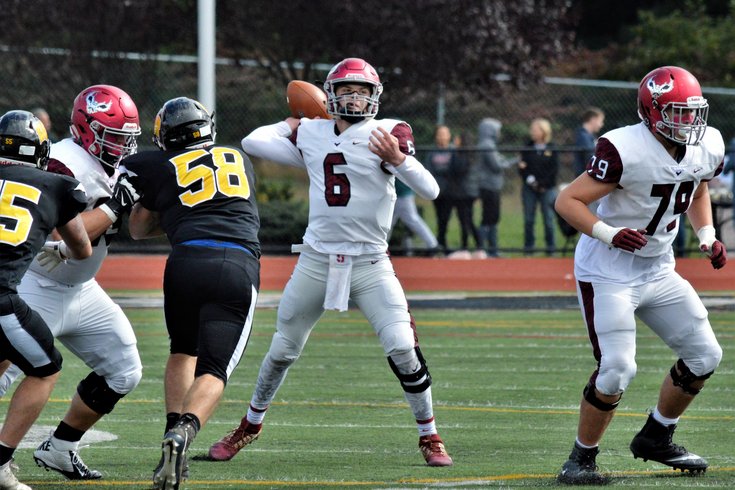 He didn’t have to see it. Kyle McCord could hear it, just by the thud of the ball hitting the receiver’s hands. He trusted the catch was made. McCord’s ongoing ritual was complete — even if it was pitch black and everyone was waiting for him. The St. Joseph’s Prep quarterback knew the exact minute Temple football’s practice facility lights shut off — 7:15 p.m. — and the Hawks’ practice ended at 7:10 p.m.

That sometimes could be a problem when you’re trying for perfection.

McCord has to end every practice with a completed pass. Even if it’s in the dark. Even if he doesn’t actually see the catch. It’s been a healthy superstition, like basketball stars wanting to make sure they leave the practice court after making their final shot. It gives off a good vibe that resonates into the next practice.

The quest for precision is why McCord would nag then-Prep offensive coordinator, now Hawks’ head coach Tim Roken for the ball bag to get that one last pass in with the team bus back to St. Joe’s waiting on him. It’s why the 6-foot-3, 205-pound junior has already committed to Ohio State after a sophomore season in which he led the Hawks to a 13-0 record and their fourth PIAA state title in six years, beating Harrisburg, 40-20, in the 6A state championship last December.

Last season, McCord completed 201 passes for 2,883 yards and an astounding 35 touchdown passes against just three interceptions. As a sophomore, he was named Catholic League Red Division’s (large schools) MVP. He was named to MaxPreps sophomore all-American team and was named EasternPAFootball.com’s Player of the Year and PhillyVoice’s inaugural High School Player of the Year.

This year, the glow on McCord — and for the matter, the St. Joe’s Prep program — will be nationally intense.

With his commitment to Ohio State, which has as rabid a fanbase as the Eagles, his every move will be viewed by Buckeye Nation, as it will for the national TV audiences when the Hawks play at Marietta High School (GA), on August 30, Washington D.C. stalwart St. John’s at Rutgers University on September 6, and conclude their non-league schedule by hosting national powerhouse IMG Academy Friday, September 13, at Widener’s Leslie C. Quick Jr. Stadium.

Aside from McCord, this Hawks’ team could be among the best that’s ever played in the Philadelphia area. Jeremiah Trotter Jr., the son of former Eagles’ great Jeremiah Trotter, was arguably the best player on the field in the state championship game, leading the Hawks with 12 tackles. Marvin Harrison Jr., the 6-foot-3 son of Hall of Famer Marvin Harrison, caught a team-high eight passes for 76 yards in the state title game. Both are in McCord’s junior class.

Last season, the Hawks finished ranked No. 6 in the country by USA Today and No. 11 by MaxPreps. There is a strong likelihood that St. Joe’s will begin this season as a top three team in the country.

“Once I’m committed to something, I’m 100 percent committed, so there’s no doubt about that,” McCord said.

Having the major life-decision choice made, McCord can focus solely on football. Growing up in South Jersey, throwing and catching passes from his father, Derek, playing against his older brother, Cole, in the backyard, Kyle was always Mark Sanchez, when Sanchez was leading the New York Jets to consecutive AFC championship games. The Jets love comes from Derek’s Long Island roots. It’s why Kyle wears No. 6.

“When I had the chance to wear No. 6, I didn’t hesitate at all,” said Kyle, laughing. “It’s the number that I want to wear at Ohio State.”

The other tradition is finishing a practice or a drill with a completion.

“Every time I finish, I want to end on a good note and make sure that I cover everything,” said Kyle, who hasn’t lost a game as a starting quarterback since fifth grade. “That goes with any sport I play, basketball, or anything I play, it has to end on a good note. When I was in the backyard playing against my brother, I had to finish by scoring a touchdown against my brother and go in the house on a high note.

“I guess you can all me a perfectionist. I’m a sore loser.”

Then Kyle recalled, laughing, a story about the time his parents threw a birthday party for him and his team lost a wiffle ball game.

“It my own birthday party and I remember crying because my team lost by a run,” Kyle said. “I think I’ve gotten over that. But I am competitive. I won’t get over that. It’s why I love Tom Brady today. I love his mechanics and the way he competes. I do a lot of things with a purpose and I would say I compete with myself.”

When we would practice at Temple, the lights went out at 7:15, so I was throwing routes when the lights weren’t on. I wanted to get better in every single little way.

As a freshman, McCord backed up starting senior Marquez McCray. McCord got some reps in Prep blowouts, and there were many, but he also didn’t make life easy for the No. 1 defense as the scout-team quarterback.

“We were going up against arguably one of the best defenses in the country and I worked on beating the defense,” McCord said. “That’s when it started when I had to get that extra pass in, because I would throw an incomplete pass. I asked coach Roken to get a few extra passes in after practice.

“When we would practice at Temple, the lights went out at 7:15, so I was throwing routes when the lights weren’t on. I wanted to get better in every single little way. That happened two or three times my freshman year, and last year, it happened a lot more. I asked coach Roken for the ball bag to get five more minutes. I had to nag them a little to do it.”

McCord doesn’t have to nag anymore.

What may define McCord even more, and what Roken always knew, is what Ohio State fans will come to know about their future quarterback: He doesn’t rattle in the spotlight.

In the state championship, his first pass was returned for a pick-six. The rest of the game McCord devoured Harrisburg, completing 26 of 37 for 283 yards and two touchdowns. After Harrisburg scored, the Hawks scored on four successive drives.

McCord, who lives in Mount Laurel, N.J., will be playing these next two years for two sets of colors — St. Joseph’s Prep crimson and gray and Buckeye scarlet and gray.

“That interception fired Kyle up, because he doesn’t like making mistakes,” Roken said. “Kyle gets upset at practice. He’ll keep going at it until he gets it right — and that means always ending practice on a good note. The way he carries himself is what the other guys see, and that’s with a business-like mentality that means getting their work done and making sure they get it right.

“That’s the whole team. We have a lot of guys that keep going at it until they get it right. Kyle has a great head on his shoulders. He focuses on the job at hand — and Kyle will make sure that spreads among his teammates. Kyle is a good leader, not just because he’s good, but because he works hard at it and he’s humble, which comes from his parents. Kyle is just a good kid.

Everyone, apparently, knows what McCord is about.

Thanks to more than a few passes in the dark.