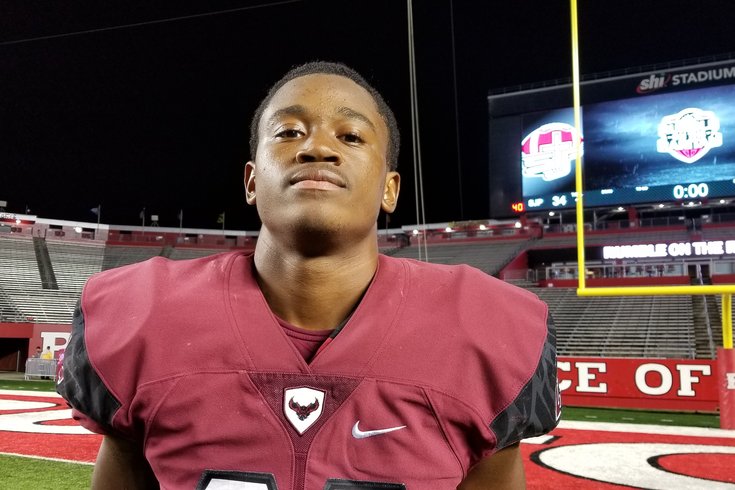 It’s easy to forget that Keenan Nelson Jr. is only a sophomore. He’s a 6-foot-1, 190-pound St. Joseph’s Prep cornerback, which is basically the size of an NFL cornerback right now and in some cases (the Eagles’ Ronald Darby is 5-11, 193 and Sidney Jones is 6-foot, 181) bigger. Through two games this season, Nelson has faced LSU-bound Rakim Jarrett (St. John’s, D.C.) and Michigan State-commit Ricky White (Marietta, GA) in consecutive weeks and held his own.

This Friday, on national TV once again, Nelson will be in the eye of another powerhouse storm, IMG Academy, which the Hawks (1-1) will play tonight at 7 p.m. at Rutgers SHI Stadium on ESPNU.

Nelson got bits of time last year, though his teammates saw enough of him enough to stick him with the moniker, “Stone Cold.” It kind of helps when you’re going up against one of the best high school receivers in the country every day in 6-foot-4 junior Marvin Harrison Jr.

“If I make a bad play, I don’t worry about it, because I don’t want to let it affect the next play,” Nelson said. “My mentality is simple: I don’t want my guy to catch the ball. I basically don’t want the quarterback to look at my side of the field. Because I have long arms, I can reach you from a far distance.

Nelson received an offer from Rutgers last year and Temple this year.

Nelson is very good at the line of scrimmage and he’s excellent with his hands. He also has good catch-up speed and studies his opponents well.

“Keenan prides himself on playing the best in the country, and playing Marvin every day has been a big help,” Hawks’ coach Tim Roken said. “Marvin has helped Keenan, and Keenan has helped Marvin as well. Our schedule helps, too. We go up against some of the best teams in the country.

“By the time Keenan is a senior, he’s going to go anywhere he wants. He’s already received national exposure holding his own against some of the top receivers in the country. The guys joke with him that he’s ‘Stone Cold,’ because Keenan is quiet for the most part, but he works hard and he’s driven in the weight room and works hard in the classroom.”

“I liked everything about Clemson when I was there, and it reminded me a lot like The Prep,” Trotter Jr. said. “I’m happy. After going to the game down there and speaking to the coaches, I already had a good feeling. I told my dad that I liked it and told (Tigers’ head coach Dabo Swinney) that I wanted to go here after the game.

“It feels great. Now I don’t have to worry about anything now. I can just concentrate on football. I didn’t see anyone wearing No. 54 on defense (Trotter’s number and his dad’s number with the Eagles). I would like to wear it. I’m going to try and get it, but if I can’t, it’s not that big of a deal.”

St. Joe’s Prep (1-1) vs. IMG Academy (D.C.) (2-0) at SHI Stadium at Rutgers, 7 p.m. Friday
The Hawks were thoroughly impressive in beating St. John’s College of Washington, D.C., 34-30, last Friday. St. Joe’s Prep got out to a 21-0 start, but a torrent of 20 unanswered St. John’s points in a three-minute, six-second span, gave the Cadets a 27-20 lead in the third quarter. Prep scored 14 of the next 17 points to win. Junior receiver Malik Cooper had a career-high five catches for 157 yards and two TDs, while McCord completed 17 of 35 passes for 283 yards and three touchdowns, two to Cooper and one to Marvin Harrison Jr. IMG used a pick-six to score one TD and a blocked punt that set up another in the Ascenders’ 24-7 win over defending Class 6A Florida state champion Miami Northwestern last Friday.