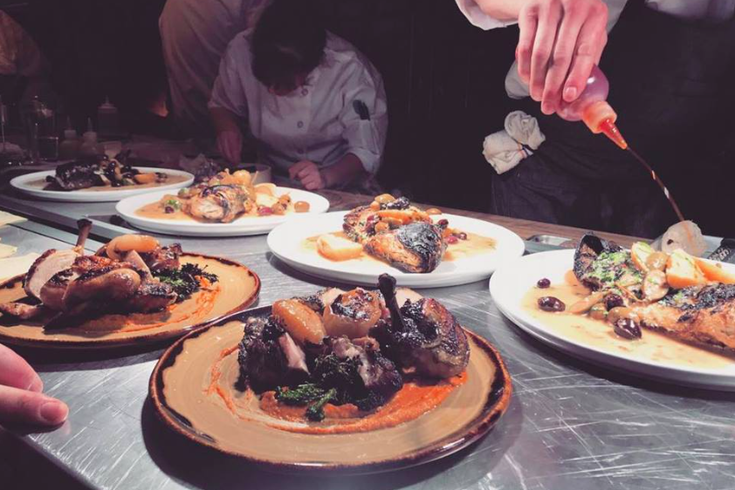 Hearthside is located at 801 Haddon Ave. in Collingswood, New Jersey.

From Harp & Crown to Double Knot and Wm. Mulherin's Sons, top-notch restaurants have been opening their doors to instant critical acclaim in Philadelphia over the past few years.

That's why it comes as a bit of a surprise that Food & Wine would claim the city's hottest new spot isn't located in Philadelphia at all.

They're talking about Hearthside, the contemporary wood-fired BYOB that opened last fall across the Benjamin Franklin Bridge. Philly's best new restaurant is in Collingswood.

Head chef Dominic Piperno, joined by his wife Lindsay, brought with him a formative experience in Philadelphia's restaurant scene, where he learned the wonders of wood-fired cuisine at Vernick Food & Drink. Previously, he had been a chef in Italy and worked at Collingswood standout Zeppoli.

Food & Wine caught up with the Pipernos and raved about the food and atmosphere.

Inside the warm, rustic dining room that seats 54, diners are situated around the open kitchen, where they can watch Piperno and sous chef Meredith “Mary” Medoway preparing their meal. The oak wood fire touches much of the menu, from the 35-ounce, 30-day-dry aged porterhouse meant to be shared with the table, to roasted beets, housemade breads, and a maitake mushroom dish with miso and delicate puffed grains.

Hearthside's menu is organized by small, medium and large dishes — along with options for the table — that cover a range of salads and entrees.

Lindsay Piperno explained to Food & Wine the the restaurant has gradually become more daring with its dishes, graduating from a simple grilled chicken breast to lamb chops and duck breast.

"In the beginning we played it safe to a certain extent, but people trust us now," Piperno said.

Hearthside will be adding outdoor tables this summer, so if you're up for a taste of Philadelphia outside Center City, and you trust Food & Wine's opinion, Hearthside might be the city's new home away from home.