The heat of discourse: Bernie boosters show support for their man 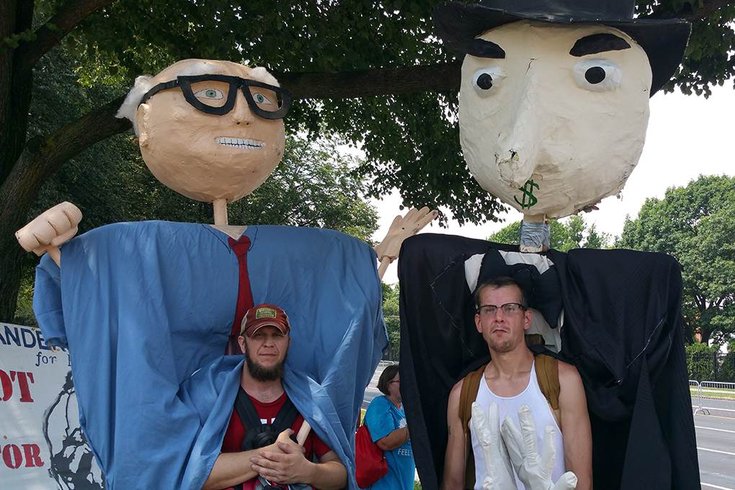 John Jarecki, 38, a protester from Omaha, Nebraska, took a week to construct a hulking Bernie Sanders stick figure that he paraded around FDR Park on his shoulder in the staggering heat on Monday afternoon.

They feel as if they still haven’t been heard yet, so a few hundred Bernie Sanders’ supporters filled FDR Park on a hot muggy Monday across the street from the Wells Fargo Center, where the Democratic National Convention has kicked off.

They came from as far as Utah, Nebraska and Iowa to give a throaty refrain as to why their man should still be a consideration for president.

Drenched in sweat, they held signs and screamed their support in sweltering heat in the high 90s and a real-feel temperature approaching 107. Their resolve was impressive, even as three protesters succumbed to the heat and needed medical treatment, according to Philadelphia police.

The protesters were peaceful, lending a throwback 1960s sit-in feel in the aftermath of the Debbie Wasserman Schultz resignation on Sunday as Democratic National Committee Chairwoman. Schultz said she would step down as DNC chairwoman after the convention on Thursday. She’s resigning in lieu of the leaked email fallout that critics say show there was DNC favoritism toward presumptive Democratic nominee Hillary Clinton over Sanders during the primaries.

To Sanders’ protesters, the Schultz submission was further proof of a “rigged system,” something they were protesting to change – along with their unbending belief Sanders is the right person to lead the country.

They decorated the intersection of Broad Street and Pattison Avenue outside the arena in chalky pastels, with Sanders’ graffiti jotted everywhere. One woman, Kim Smith, took the trek from Salt Lake City, Utah, to be here for the DNC.

The 39-year-old massage therapist used to live in Harrisburg, and has visited Philadelphia many times. Her brother went to Drexel University.

But this visit came with a message.

“I like Bernie Sanders’ integrity and honesty, he’s still for all of us together, even the rich,” Smith said. “It didn’t surprise me when I heard about the emails from the DNC. I could see it the whole way through the primaries. It is rigged. We’re going to be here all week. We’re organized and we’re going to be heard. I just want to be here to show support and have a visual representation as a voice of the people. That’s what this is all about. Bernie hasn’t gotten a fair shake from the DNC. I have hope people will see that. Bernie is the right person. There’s no way around it.” 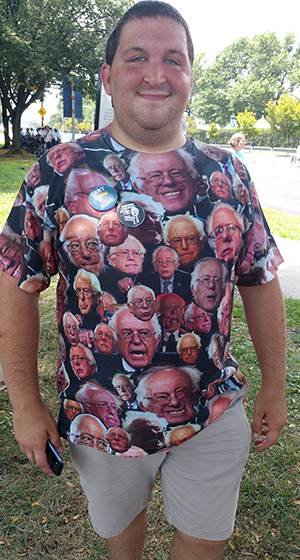 C.J. Petersen, 26, from Iowa, sported a multi-headed Bernie Sanders shirt on Monday afternoon at FDR Park. He worked for the Sanders campaign in Iowa and Nebraska.

Smith said she would vote for Sanders regardless of whether he was nominated at the DNC or not.

John Jarecki has the same attitude. A 38-year-old union insulator from Omaha, Nebraska, he took a week to construct a hulking Bernie Sanders stick figure that he paraded around on Monday afternoon on his shoulders. It put some in mind of a Mummer's float.

Jarecki was front and center when the group gathered at Broad and Pattison about 1:30 p.m. on Monday.

“It’s been a year-and-a-half of doing this, and no matter what the outcome is this week, I want to take my support to the very end,” Jarecki said. “This is the last chance to voice my opinion before things are finally set in stone. This will at least show the Democratic Party that if they move away from progressive values, you’re going to move away from us. And we’re going to move away.

“There are going to a lot of people who are looking at third party. I’m all for pushing more options politically," he continued. "I’m doing with these two (parties), especially with how they treated Bernie. The emails show it’s blatantly a rigged system. We’ve dealt with the state parties, and we’ve seen how sending out ballots kept getting the run-around. It’s nothing illegal. They kept telling us that they would get back to us.”

“Bernie is going to do what he wants to do, but he works with these people, and he has to stay within the party, because that’s his only means of change,” Jarecki said. “We’re not going to sit here and support Hillary, and I’m really surprised why so many unions backed her when she’s as much of an idiot at Donald Trump. Hopefully, enough people will join us to start a third party. This is the last gasp for us. Hey, let’s let it all go.”

One of the more interesting pieces of Sanders’ clothing was worn by C.J. Petersen, a 26-year-old from Iowa who is currently unemployed though said he worked briefly a Sanders staffer in Nebraska and Iowa. Petersen was walking around with a Sanders’ t-shirt, with all sorts of Sanders’ expressions emblazed everywhere on it.

Petersen still holds out hope Sanders’ message is heard and some of it absorbed by the Democratic Party.

“I want to hear Bernie talking about the issues, and this is a campaign about the issues and us, not Bernie,” Petersen said. “We’re not going to go away. This is about the progressive movement continuing. Hillary is just as much part of the establishment as Trump. This doesn’t mean she has bad intentions. But I will not vote for Hillary Clinton, nor will I vote for Donald Trump. I think they’re both dangerous for the country.”

One of the few upheavals evident at the protest was a group calling itself “OfficialStreetPreachers.” Its members were protesting the protesters, raising banners claiming, “Jesus is angry with you sinners.” They indicated their displeasure on everything from “Catholics,” to “Immodest Women,” to “Little Monsters,” “Metal-Heads,” “Pot-Heads,” “White Supremacists,” “Hypocrites” and “Whores.”

Their spokesman, David Grisham, 55, of Anchorage, Alaska, described the organization as a conglomeration of different groups throughout the United States. 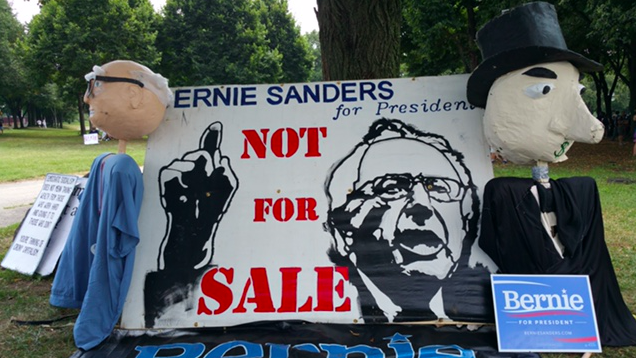 A sign shows support for Bernie Sanders in FDR park, where hundreds of protesters gathered Monday for the start of the Democratic National Convention.

They spoke on a bullhorn over the “Let’s Give Peace a Chance” music of the Sanders’ cliché.

“We come together for Gay Pride events, Super Bowls, any chance to attract a large crowd,” Grisham said. “We’re not Bernie fans, because Bernie is a socialist, and socialism is anti-God. We stand for God and country. We believe that Christian men and women that implemented the constitutional form of government got that from the precepts of the Bible. America needs to go back to his roots. It’s about America going back to God.

“Some of us support Donald Trump, some don’t. It’s not going to be a president that saves us," he said. "It’s going to be a king that sits up in heaven.”

Just a few feet away, Sunshine Sullivan shook her head. The 32-year-old African-American cosmetologist came to the Sanders’ rally from Washington, D.C.

“I love Bernie and [expletive] Hillary,” Sullivan said. “Hillary is the problem, and she’s worse than Trump. I would vote for Trump before Hillary, if it came down to Hillary and Trump. Yes, I will. Trump is not as corrupt at Hillary Clinton. He didn’t steal his nomination like Hillary did.

“Trump is a moron, but no one will stop the Clinton machine," she continued. "This is like 1968. Back then, Bernie Sanders was fighting and he’s fighting now. He’s the same man who has been fighting for equal rights for everyone. He’s brought back that feeling we had during the Civil Rights movement. Black women in this country have been silenced forever.

“I have hope that the issues and the concerns are actually addressed by Bernie Sanders. Hillary Clinton doesn’t care about anyone but herself and money. After the email leaks from the DNC, and I hope Bernie doesn’t endorse her. This is important. He needs to know people still stand for him.”

By the end of the week, the hundreds that gathered on Monday are reported to blossom into the tens of thousands, possibly as many as 30,000 by the end of the DNC on Thursday. A break in the sweltering heat would increase the numbers, too.