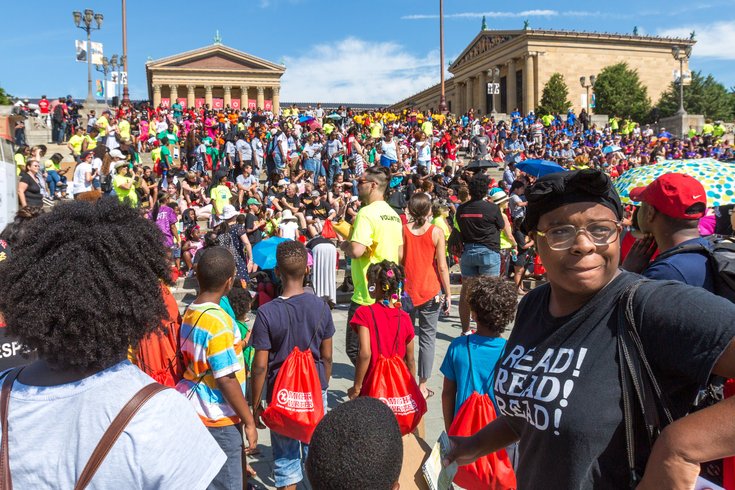 More than 1,000 students came to the steps of the Philadelphia Museum of Art on Tuesday morning in an event hosted by Mighty Writers in hopes of breaking the world record for the most essays written in the same place.

With the temperature topping 90-degrees on Tuesday morning, thousands of students and volunteers sweated it out at the Philadelphia Museum of Art in an attempt to break the world record for most young writers writing in one place, at one time.

But it all may have been for naught.

Although organizers believe more than 3,000 children – between the ages of 7 and 17 – were on hand at the art museum steps, an official from the Guinness Book of World Records said if more than 10-percent of the attendees did not participate in the record breaking attempt they would fail – even if the group exceed the 1,179 writers needed to break the current record.

"There were a lot of people coming in and out," said Michael Empric, an adjudicator for Guinness World Records, who was on hand to tally the final essays. "I think it was largely weather related, but if 10 percent left, weren't paying attention or just didn't participate, it would be void."

The world-record committee would need a few days to compare the number of completed essays – all written on the theme of "if I were president" – to the number sign up sheets and determine the percentage of completed, valid essays.

Even if the children's work didn't break the record, it won't be for a lack of effort. 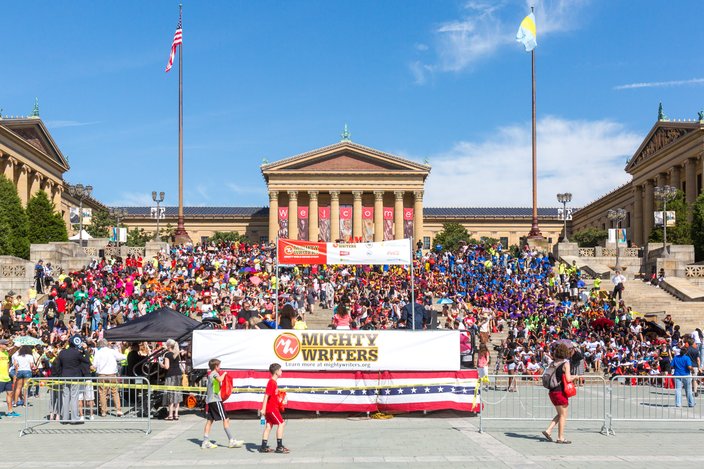 More than 3,000 students came to the steps of the Philadelphia Museum of Art on Tuesday morning for an event hosted by Mighty Writers in hopes of breaking the world record for the most essays written in the same place.

During the sweltering morning heat, thousands gathered on the hot concrete steps in front of the Philadelphia Museum of Art. Mina Say What, radio host at Power 99, led the children in the attempt.

Organized by Mighty Writers, a nonprofit group that helps children throughout the city learn to write and think with clarity – full disclosure, this reporter taught writing classes for Mighty Writers for three years – the effort allowed children working with Mighty Writers as well as those from various summer camps and school groups through the city, to participate in an attempt to break a world record.

The current record of 1,178 simultaneous students writing essays is held by students from Beijing, China, who set the record Sept. 6, 2013.

Tim Whitaker, founder of Mighty Writers, said he felt the record was ripe for the taking, especially now, with the Democratic National Convention being held in Philadelphia.

"We wanted to bring this here to shine some light on the literacy crisis in the city," said Whitaker, noting that Philadelphia high schools suffer from a 40-percent dropout rate. "And we wanted to do it during the DNC. That was our momentum."

During the event, the Phillie Phanatic and Will D. Cat – the mascot for the NCAA men's basketball champion Villanova Wildcats – entertained the crowd of that Whitaker estimated to be more than 3,000 children. The children were given 20 minutes to write an essay on what they would do if given the reins to the White House. 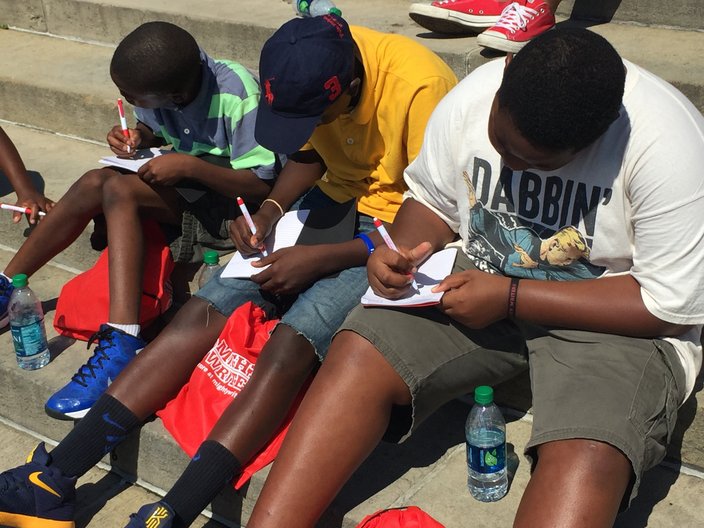 Mateen Wiggins, 10, Mycha Wiggins, 14, and Jalen Hollis, 12, all from West Philadelphia, write essays in an attempt to break a world record on Tuesday.

"I wrote that I would make education free, because everyone needs it," 14-year-old Mycha Wiggins, of West Philadelphia, said.

Wiggins' 10-year-old brother, Mateen, said he wrote about the important role of immigrants in building the United States and how he feels the proposed policy's of Republican presidential nominee Donald Trump's are racist.

"And, I'd also give away candy and ice cream to people so they would go vote," Mateen said.

To 12-year-old Jalen Hollis, of West Philadelphia, stopping further incidents of police brutality, like those recently in the news, would be a focus of his presidential platform.

"I'd do something about the system. You know, because, people are getting killed. And these people are innocent," Hollis said. "I'd also do something to raise the minimum wage."

When Empric announced that there would be no determination Tuesday about the world record, Whitaker said he wouldn't be disappointed, no matter the results, because thousands of children turned out to share their love of writing.

"To me, this is a victory, just getting all these kids out here," he said.

Officials from the Guinness Book of World Records are expected to return with results from Tuesday's record-breaking attempt in a few days.