Hell in a Cell: Charlotte and Sasha Banks live up to the hype inside the cage 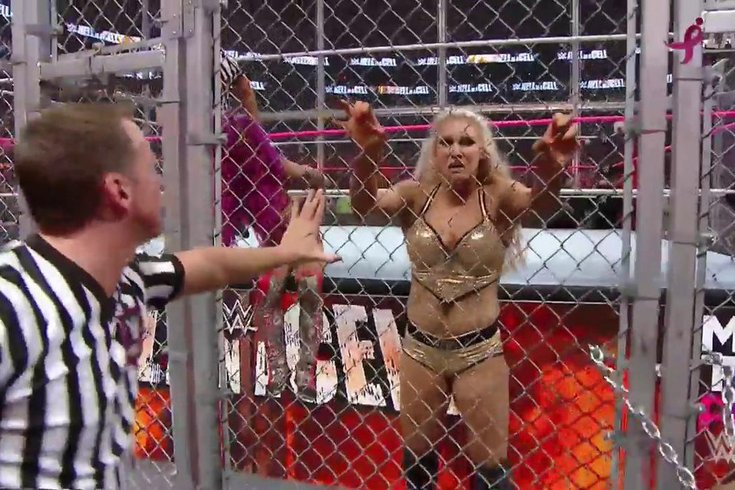 Charlotte tried escaping the cage after Sasha Banks recovered from her powerbomb through a table.

When the dust settled on Raw’s Hell in a Cell pay-per-view, we saw history made. Not only did Sasha Banks and Charlotte fight inside the Hell in a Cell, but it was the main event of the evening. The two prior Hell in a Cell matches were fantastic, so they had a lot to live up to in closing the show.

Were they up to it? You better believe it.

Here’s what went down at the TD Garden in Boston on Sunday night:

It was a great showcase for these talents, who brought the goods in a great match to get the crowd ready for the main card. I thought the winners of this match wouldn’t matter, but with how good the match and crowd reaction was, I might’ve been wrong. Time will tell.

Alexander nailed Gulak with the Lumbar Check for the win.

Hell in a Cell match for the WWE United States Championship

As far as the Hell in a Cell matches go, this might’ve been the least impressive.

But it was still entertaining as hell.

Roman Reigns and Rusev turned this into a high-profile physical battle that used the cell structure sparingly. The steel steps came into play for both sides. Rusev locked in The Accolade with a chain to Reigns on the steps, but Reigns busted out of it. Big surprise. He recovered to hit the spear to Rusev off the steps to retain his United States Championship.

Okay match. Bayley was selling her shoulder injury, but it thankfully it didn’t cost her. She hit Brooke with the Bayley-to-Belly suplex for the win.

Nothing big here. Gallows and Anderson got the win after hitting Amore with the Magic Killer.

Hell in a Cell Match for the WWE Universal Championship

This match had no business being inside the cell, but both Owens and Rollins made it one of the more memorable Hell in a Cell matches so I’ve decided to look past that. During the match, Chris Jericho came out when the door was open to tend to an ailing referee, and Jericho locked himself in the cage for the rest of the match.

He wasn’t heavily involved for the entirety of it, but he did make a difference in the end. There were a few great spots, including Rollins powerbombing Owens through a table on the outside of the ring.

Jericho would eventually help Owens get the better of Rollins and Owens hit The Architect with a powerbomb through two steel chairs to seal the victory and retain his title.

I was afraid it would happen. But I didn’t think it actually would.

Heading into the match, we saw Brian Kendrick beg TJ Perkins to let him win. And Perkins showed that sympathy towards his old friend during the match, where Kendrick looked to be done for. Perkins got nailed with a headbutt and then Kendrick locked in the Captain’s Hook and Perkins tapped out.

Terrible move by WWE here. I get Kendrick is popular – more popular than most, if not all, the WWE cruiserweights right now – and that’s exactly the problem. The division has been handled poorly since it made its debut on Raw back in September, and giving the title to a 37-year old veteran doesn’t do any good for the younger guys trying to make this division special.

I enjoyed this match because it was entertaining and The New Day came away with the titles still in hand. Despite Kofi Kingston nailing Sheamus with Trouble in Paradise while Xavier Woods was tapping out to Cesaro’s Sharpshooter, the champions still have their gold. Cesaro and Sheamus continue to be an entertaining team. It seems like they’ll get a rematch eventually because they won the match, but hopefully they’re not tag team champions any time soon.

Your winners by disqualification: Cesaro/Sheamus

Hell in a Cell Match for the Raw Women’s Championship

Maybe the hardest part of having the first-ever women’s match inside the Hell in a Cell would be to make it as memorable as others we’ve seen throughout the years. There have been plenty of Hell in a Cell matches that have been forgettable, and the biggest task for these women would be to start the match off hot and build the anticipation throughout.

That’s exactly what they did.

Before the match even technically began, Charlotte attacked Banks in the ring and the two brawled outside. They both climbed the cage, and that ended with a Charlotte powerbomb to Banks through the announcer's table.

Memories of Mick Foley flying through the table went through everyone’s heads. Banks did the back injury sell job and a stretcher came out to take Banks out. It looked very much like the match wouldn’t happen and Charlotte would be declared the winner.

But then Banks got up from the stretcher, got inside the cell, and hell was on. The two women engaged in a fantastic battle, as is the norm.  Tables and chairs got involved. Banks hit the Frogsplash and the Three Amigos as a tribute to the late Eddie Guerrero, one of her idols. But that, unfortunately, wasn’t enough.

Even though Banks got out of the Figure Eight by nailing Charlotte with a steel chair a few times, Charlotte would eventually throw Banks onto a table set up in the ring, trying to break it, then hitting her with Natural Selection for the win.

Banks is billed as from Boston, so having her lose is very questionable. Considering both of her title reigns this year have lasted a relatively short time, I have to wonder if she’ll ever get a long-term reign. Charlotte is now a three-time champion, and the obvious next feud is with Bayley. Where does that leave Banks?

I thought all three Hell in a Cell matches lived up to the hype. No, there was no blood, but it’s a time where we’re not used to seeing much blood, anyway. That didn’t take away from the matches for me. The main event was special, not just because it was the first time two women main evented a WWE pay-per-view, but we saw the first title change in a Hell in a Cell match take place in three years and saw Charlotte become the three-time Women’s Champion. She’s making history herself.

As for Banks, she did an amazing job selling the back injury and even though I’m upset she lost the title again so quickly, this feud with Charlotte has the makings of becoming one of the all-timers. Banks will eventually become Women’s Champion again.

Check back tomorrow for my Raw roundup, with all the fallout from Hell in a Cell and a look towards Survivor Series.