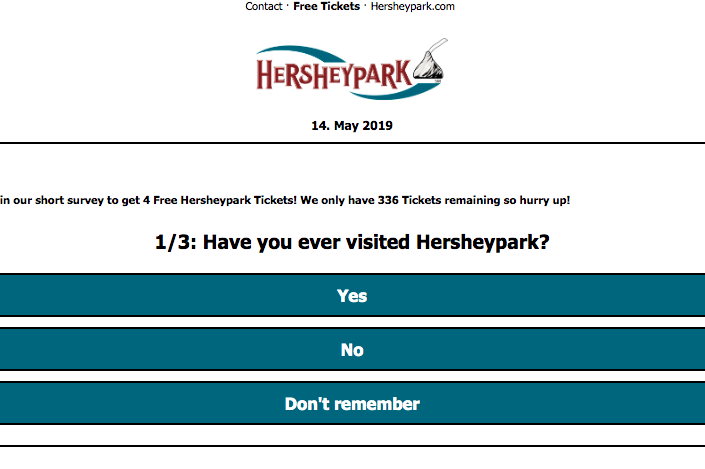 A fraudulent website offering four free tickets to Hersheypark in exchange for answering a survey.

A fraudulent survey was widely circulated on social media this month, offering four, free passes to Hersheypark in exchange for answering survey questions and sharing the link on Facebook.

The survey asks participants to answer three questions about their experiences at the Hershey, Pennsylvania, amusement park, like "You prefer Hersheypark because of ..." in exchange for four free tickets to celebrate the park's 112th anniversary. The survey then asks participants to share the link on Facebook.

The website, at the URL hersheyspark.com-park00.com, has been identified as fake by Hersheypark. Officials reportedly have alerted Facebook, PennLive reported.

Amusement park ticket scams are common for this time of year. In March, a scam for Knoebels offered free tickets in exchange for taking a similar survey. A viral 2016 scam at Six Flags offered three free tickets if participants forwarded a survey to 15 friends.

"These contests pop up every summer, run by shady, anonymous individuals who can't be traced," Six Flags officials posted to the park's website following the scam that targeted their properties. "Their goal is to get you to sign up for 'introductory programs' that aren't easy to cancel, or to collect your personal information, or to trick you into installing malware on your computer ...  We do not condone any of these programs and would shut them down if we could."

Hersheypark is celebrating its 112th anniversary this year. In conjunction, the park will unveil a handful of new dining options; debut an indoor ride called Reese's Cupfusion; and revamping the park entrance.