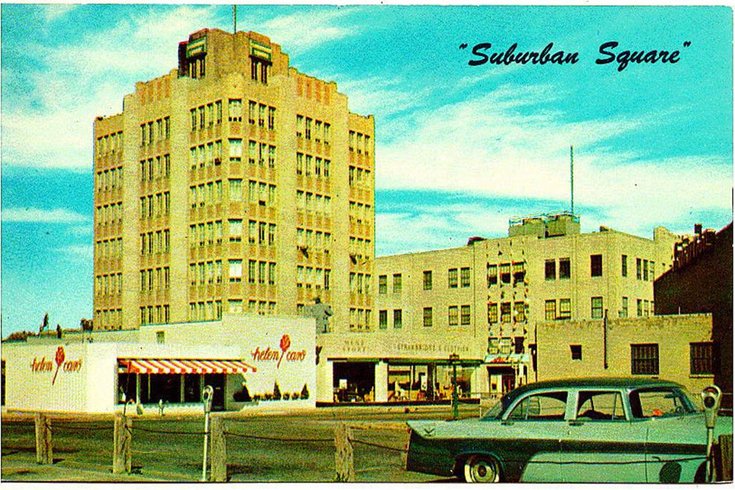 A postcard from the 1950s shows the Strawbridge & Clothier store at Suburban Square in Ardmore.

For the first time in 85 years, Ardmore's Suburban Square soon will be without a department store.

Macy's will shutter the Main Line location later this month, leaving in question the future of the five-story Art Deco building where Strawbridge & Clothier first ventured to the suburbs in 1930. The shopping center was one of the first in the United States, and the first with a department store.

As patrons and Ardmore merchants are left to wonder how the area will deal with the loss of the notable department store, its demise in many respects mirrors a national trend as shoppers move away from bricks-and-mortar to online, perhaps aggravated by a Suburban Square that seems to have struggled to define its niche in recent years.

Whatever the reason, there is no denying that the department store – and the shopping center – have a place in history.

When Strawbridge's opened on East Montgomery Avenue, there were few other department stores outside central cities. The very idea of a shopping center was unusual. Although America began suburbanizing in earnest during the 1920s, the Great Depression and World War II slowed everything down. In 1946 there were still only eight shopping centers in the nation.

“I’ve been coming here a long time, since I was 5 years old. It’s really sad to see this store close. It’s such an old store. But lately I feel like they can’t figure out what their market is.” – Lisa Hofferman of Bala Cynwyd, Macy's shopper

It was unusual, too, for a suburban development by virtue of its two tall landmark buildings, the five-story Art Deco building and the eight-story Times Medical Building, which still loom over a sea of more diminutive retail and restaurants.

For the first decades of its existence Suburban Square could market itself to the Main Line and all of Montgomery County, even outlying city neighborhoods, as the shopping destination north of Center City Philadelphia. (In Delaware County, the Upper Darby Center, one of the other eight pre-1946 shopping centers in America, catered to the western suburbs.) But after the war, as more and more people left the city, the number of shopping centers mushroomed to accommodate the suburban population boom.

A similar story unfolded across the nation. By 1960 there were 4,000 shopping centers in the United States, and most of them eschewed Suburban Square’s layout, with its urban-esque tall buildings. In 1963 another unassuming rival opened in King of Prussia – location of another regional Macy’s today – which would eventually grow to be the second largest mall in the nation. 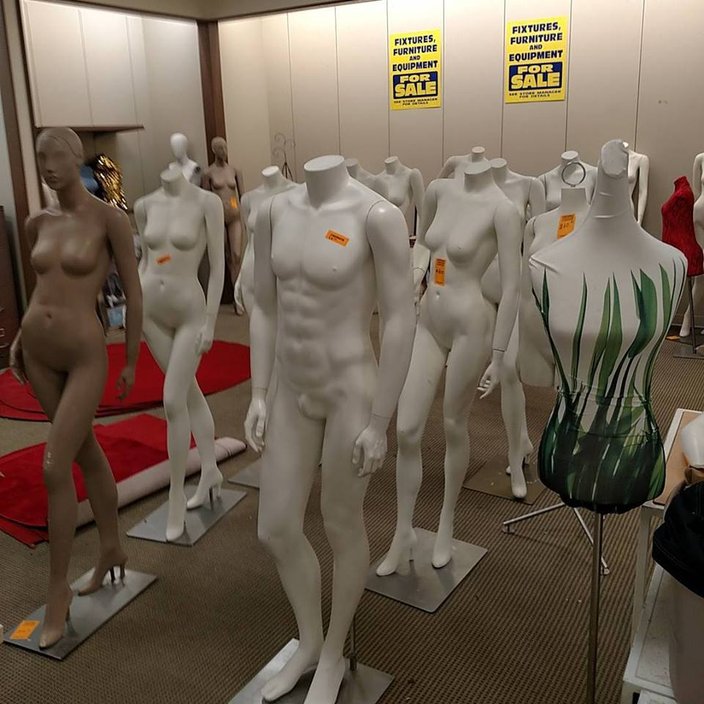 Mannequins and other equipment are on liquidation sale at the Macy's in Suburban Square as the store prepares to close its doors later this month.

'MEET YOU AT THE SQUARE!'

Purchased from Strawbridge & Clothier in 2006, the department store building has since been operated by Macy's, the chief survivor of the century-long department store wars. But a decade later, the 102,000-square-foot Macy’s is already being downsized, with the upper floors shut off from customers, and enormous signs announcing liquidation sales and prices slashed by 50 to 80 percent. In the back of the basement level, massed ranks of nude mannequins are on sale. The store, with its 1930s-era ornamental flourishes, might have a haunted quality to it, if the overhead lights didn’t still burn with their usual intensity.

“I’ve been coming here a long time, since I was 5 years old,” says Lisa Hofferman, a resident of Bala Cynwyd and one of the few shoppers diligently plying the racks of heavily discounted clothing. “It’s really sad to see this store close. It’s such an old store. But lately I feel like they can’t figure out what their market is.”

Another shopper was taking advantage of the Macy’s liquidation sale to buy up display cases and showcases on the cheap.

“I was born and raised down here and moved away when I was young, but we would still come down here to shop,” says Rosemary Camponovo, who owns a jewelry shop in Blue Bell, Montgomery County. “It was the location. We’d come over on the weekend: ‘I’ll meet you at the square!’

"I have no idea what they’ll replace this with," she adds. "It’d be nice to see something really high-end, but there are so many other options now. Today you can just sit on your sofa and shop.”

AN EMPHASIS ON FOOD

Suburban Square as a whole has struggled to define its niche in recent years. The shopping center lost its movie theater, which was once catty-corner to the Macy's, in 1979. The cinema building then hosted a farmer’s market, followed by an American Eagle Outfitters. In 2015 it was converted for use as a Not Your Average Joe’s, a chain of New England-based mid-market eateries. (It’s the kind of restaurant that serves French fries in a cone, dry hot wings in a bed of greens, and decently priced happy hour specials).

This latest iteration of the old movie theater is a sign of Suburban Square’s emphasis on food, as opposed to retail. The farmers market’s new location is far larger, and hosts a plethora of dining and shopping options including a DiBruno Brothers, Capital Teas and vendors offering such delicacies as sushi and cupcakes. Right next door is a Trader Joe’s, which seemingly does a very brisk trade. The locus of the shopping center has shifted east, to this foodie hub, and away from the Macy’s.

“Macy’s brings a lot of people to this side of the Square. Sure I’m worried but what can you do. But I would love to see another department store.” – Theresa Butler, Ten Thousand Villages store, Ardmore

But in term of actual restaurants, the results have been fitful. From the undistinguished bar food described above to the expensive Mexican dishes at Besito, the offerings are uninspired. More interesting choices are on the other side of the railroad track, where diners can find delicious Thai and Mexican food both cheaper and better than what’s available at Suburban Square.

“They are clearly playing on Trader Joe’s and the farmers market, which have become phenomenally successful,” says John Hepp, an associate professor of history at Wilkes University and lifelong resident of the Main Line. “Not a lot of the other stuff has been. It’s really struggled to develop an eastern Main Line restaurant market.”

Hepp worked as a stock boy at Strawbridge & Clothier in the 1970s and went on to author a book called "The Middle Class City," a study of Philadelphia from 1876 to 1926 through three institutions, including department stores. Even then, Suburban Square was already quite parochial, drawing shoppers from a relatively small area.

He recalls that on some weeknights there were no customers at the old Strawbridge’s. Security would announce over the loudspeakers when someone walked in, giving workers a chance to scramble back to their stations. But because the clientele was both hyper-local and quite wealthy, special attentions were paid. Once, a well-off older customer called to request a tutorial in using a recently purchased vacuum cleaner, and instead of laughing her off, management sent Hepp off in a cab to provide training.

This month’s closure of Macy’s is not the first change to threaten the department store at Suburban Square.When Hecht’s acquired Strawbridge & Clothier in 1996 it was widely assumed that the Ardmore location would be closed, but Hepp was told that the store was spared for its historical and architectural significance.

Today, Macy’s is in no state to be sentimental. With increasing competition from big box retailers like Target, and online merchants, department stores that aren’t assured heavy foot traffic (like the Center City Macy’s) or vast seas of parking (the King of Prussia Macy’s) are finding themselves hard pressed. The Suburban Square closure isn’t a lone incident. After suffering a harsh holiday season, with sales falling 5.2 percent, Macy’s announced the closure of 40 stores and the loss of 4,800 jobs across the United States. 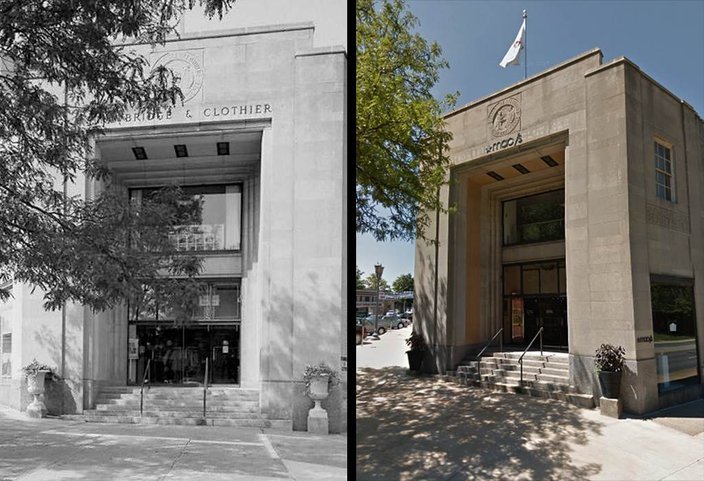 The department store at Suburban Square in Ardmore: Strawbridge & Clothier, left, in the late 1980s, and Macy's, in June 2011, which will close later this month.

What will become of the beautiful Art Deco building is unclear.

Although the landlord for Suburban Square, Kimco Realty, has made promises of a new tenant by summer, no decision has yet been announced.

“We are continuing to speak with several prospective tenants and will provide you with an update when a decision has been finalized,” wrote Kimco’s Anne Lang in an email message.

“They’re really vague with their plans when they talk to the township,” says Hepp, who notes there are already Lord and Taylor and Saks stores in nearby Bala Cynwyd. “It’s a weird building. I’m not convinced there another department store that wants to go in there.”

Inside the forlorn Macy’s store, though, one worker speculates that apartments or condos could be coming to the building. Although there have been no public announcements of such a proposal, the building does not seem large enough to support more than a couple apartments on each floor or perhaps four lofts per floor.

Across the pedestrian mall, at the Ten Thousand Villages, Theresa Butler tends the counter of the empty shop. She admits that the closure of the department store could augur tough times for surrounding retail stores on this western side of Suburban Square.

“For people who don’t want to go into the city or drive out to king of Prussia, Macy’s was definitely a pull,” says Butler. “I’m somewhat cautious about what is in store. Macy’s brings a lot of people to this side of the Square. Sure I’m worried but what can you do. But I would love to see another department store.”